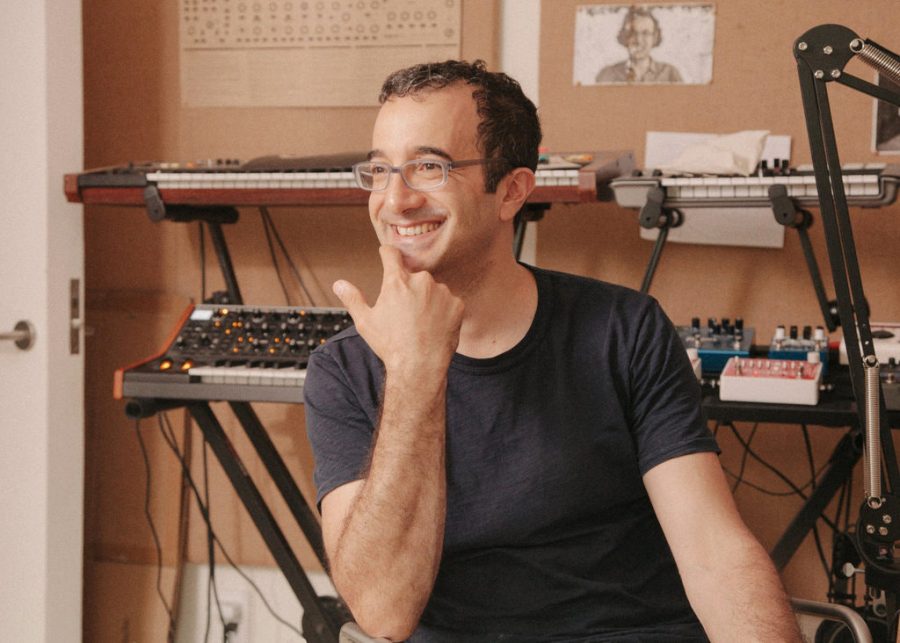 Jad Abumrad, OC ’95, is the creator and producer of some of the most popular public radio programs and podcasts, including Radiolab, More Perfect, and Dolly Parton’s America. Abumrad’s show Radiolab — previously co-hosted by Robert Krulwich, OC ’69 — airs on over 500 stations in the United States and is downloaded over 9 million times a month as a podcast. Radiolab was awarded a Peabody Award in 2011 and 2015, and Abumrad was named a MacArthur Fellow in 2011. While at Oberlin, Abumrad studied Music Composition and Creative Writing.

Can you talk a little bit about how Oberlin led you to the work you’re doing now?

I feel like Oberlin is infused in everything I do, to be honest. I wouldn’t have said that the moment I walked away from Oberlin — I distinctly remember leaving Oberlin and feeling like, “Okay, I just got a degree in Music Composition and Creative Writing. What the hell am I gonna do with it?” I felt like I had gone to this incredibly interesting place and had incredibly interesting conversations but had zero skills at the end of it, which turned out not to be true at all. But it’s weird. Oberlin was like a grenade that went off a few years late or something, like you pull the pin and it goes off four years later. When I started to tumble my way into journalism — totally unexpectedly — I suddenly found myself in this very Oberlin state of mind, constantly exploring and curious and dissatisfied, and wanting to try new things.

The thing I feel defined Oberlin for me was this restlessness, this idea that you’re not satisfied with the way that the world is and that the world could be better, the world could be different. And so you want to explore and understand the world and all of its nuances and not settle for the stories that people tell you. And I suddenly found myself in this position where that was my job: to do interviews and explore ideas and get to some new understanding of stuff. I feel like my job is an embodiment or an expression of the Oberlin ethos. Oberlin planted a seed of dissatisfaction in me that has continued to bloom throughout my career. And every good decision I’ve ever made has been because I’d been frustrated and restless and unsatisfied with the thing that’s in front of me. You know, you take a risk at that point and you do something, and then suddenly it becomes its own thing. That’s how Radiolab happened. That’s how Dolly Parton’s America happened. It was out of feeling like I just want to hear something I’m not hearing and then you just go do it.

It’s interesting to me how much the Oberlin that you’re talking about resonates with my experience of Oberlin now. One of the things that I hear a lot of conversation about on campus is that we have this culture of being so busy and wanting to be as involved as possible.

Yeah, I mean Oberlin gives you this desire to engage the world in all of its messiness. You know, it’s funny; it’s weird to me that so many people in journalism — particularly public journalism — went to Oberlin. There’s almost an Oberlin mafia in public media. We don’t all hang out and like, make decisions together. We’re all sort of distributed. But we all look at each other with a certain kind of Oberlin nod.

I mean sure, I share it, but to a much different degree. I’m much closer to my time at Oberlin than he is. And so I empathize and I understand the very things that he criticizes about Oberlin. His criticism is, as you alluded to, out of a deep, deep love. He has been so involved with Oberlin over the years.

For me, I mean, here’s how I process it: Certainly in Robert’s generation and to some extent in my generation, the people of Oberlin — that is, the sort of far left — were kind of the gadflies, they were the agitators. They were the people who stuck their finger in the eye of the powerful. And they did it through humor and they did it through a deep sense of mischief. They didn’t take the powerful seriously and they didn’t take themselves seriously.

It is interesting to me that that sense of play and mischief has shifted — and now you see that a lot more, unfortunately, on the right. On the left, we can often appear to the outside as a bunch of wet blankets. Right? And so for me, that’s an interesting shift and I don’t have a real particular moral position on it, but, I think if anything, what Robert’s reacting to is that sense that we used to be so mischievous. We used to not take ourselves quite so seriously. And that loss of lightness is actually a pretty important piece of real estate. It might not seem like it, but it is the bridge that you build to the people who hate you, to the people who don’t agree with you. I think that’s what he’s referring to.

But I also think that I don’t want to live in the world that we used to live in. We’re all progressing and moving in a new place. And a lot of what some people call — and I put this in air quotes — “political correctness” is just people trying to be taken seriously and trying to say, “Look, we don’t want to live in a stupid world, so let’s not be stupid.”

I feel like a lot of what connects all of your work is that it has that lightness that you’re talking about, that sort of ethereal quality of wonder about the world. And that is the thing that everyone is trying to figure out how you do.

You know, for me, it registers very personally. In the process of making a thing, I feel like you’re getting a Ph.D. in the topic, right? I mean, we’ve been doing a lot of reporting about race and gender. These are very hard topics to be funny about. You’re thinking deeply about history and you’re doing tons and tons of research and you’re talking to very knowledgeable people and they’re telling you very knowledgeable things and you’re trying somehow to make that into a story-shaped object. And you’re editing, and you’re going through drafts and drafts and drafts, and there is always that moment towards the end of the process where it just happens; it suddenly starts to dance on its own. You figure out how to talk about it. You figure out the words, you figure out the right music, you figure out the balance of voices. You figure out the kind of narrative structure, all of it congeals and it’s suddenly like this giant beast starts to tap dance and waltz its way across the floor. That’s the thing I think we all need to get better at: Figuring out a way to say very deeply personal, sometimes painful things in a way that’s elegant and beautiful and that will translate across differences. I think humor is nothing, it’s a way to speak across difference. If you can get someone else to laugh, then you’re at the 50-yard line, you know?

When you talk about all these problems that are dividing us right now and coming to that with a lightness, to me the epitome of what you’re talking about would be Dolly Parton’s America. What you think Dolly Parton would think of Oberlin?

That’s a great question. Oh, wow. I have no idea what Dolly would think. We spent a lot of time at The University of Tennessee with a college class that was called Dolly Parton’s America. They very generously allowed us to borrow the name from that class. The students reminded me very much of the people that I went to school with, in that they were incredibly smart. They were all History majors, so they had a very deep appreciation for the complicated histories that have led us to this moment. They’ve all taken a gender studies class and they all had the language, right, this sort of Oberlin language. And I asked Dolly about some of the ideas that came up in that class, and she just laughed like she thought it was the most hilarious thing — not in a dismissive way, but in a, “Isn’t it funny that you live a life and then suddenly you are studied by a bunch of college kids?”

What advice you would give to current Oberlin students who are interested in going into audio journalism? What they can do to best prepare to go into this changing industry?

That’s a great question. I mean, just so I understand a little bit about you guys, so you’re at WOBC and one of you is writing for the Review, right?

So you guys are in it already. In some way, the advice I would give you is live the life you’re already living. I mean, the thing about podcasting that is both incredible and also daunting is that the barriers are gone. When I was stumbling into journalism, there was just public radio and you had to intern for like three years for no pay before they even noticed you. And then if they noticed you, you just had to somehow ingratiate yourself to where they would finally give you something interesting to do. You just had to pay your dues in the stupidest way for the longest amount of time. You don’t have to do that anymore. You can make a thing and then get it out there in 48 hours.

The process of taking the interview we’re doing now and putting it on SoundCloud and then getting it up on iTunes, is trivial. But the unfortunate flip side of that is that everyone can do it. And so, how do you even get someone to pay attention to you? In a way, it’s the same problem. On some level my advice to you would be don’t wait around; just do it.

Two things matter at the end of the day. The first: Are you doing something that pleases you? Are you working in a way that you enjoy on some deep, irrational level? Like yeah, it’s hard, and there are deadlines, and it’s stressful, and there might be all-nighters, but on some level, do you just like it? You have to just like it in order to weather the ups and downs. For me, it is still pleasurable to sit in front of Pro Tools and to take one little block of sound and shove it up against another and shuffle them around until you get just the right order. I think you always have to connect with that because that’s what will get you through it.

The other piece of advice I’d give you is that even though I said don’t wait around, just do it, you also have to understand that it takes a while to get an audience and to get a voice and to develop a style that people want and to figure out how to cleverly rearrange what you’re doing so that people will like it. That takes a long time. And so you have to also just give it a minute. So I would say hurry up, don’t wait, but also give it a minute. That’s my paradoxical advice.