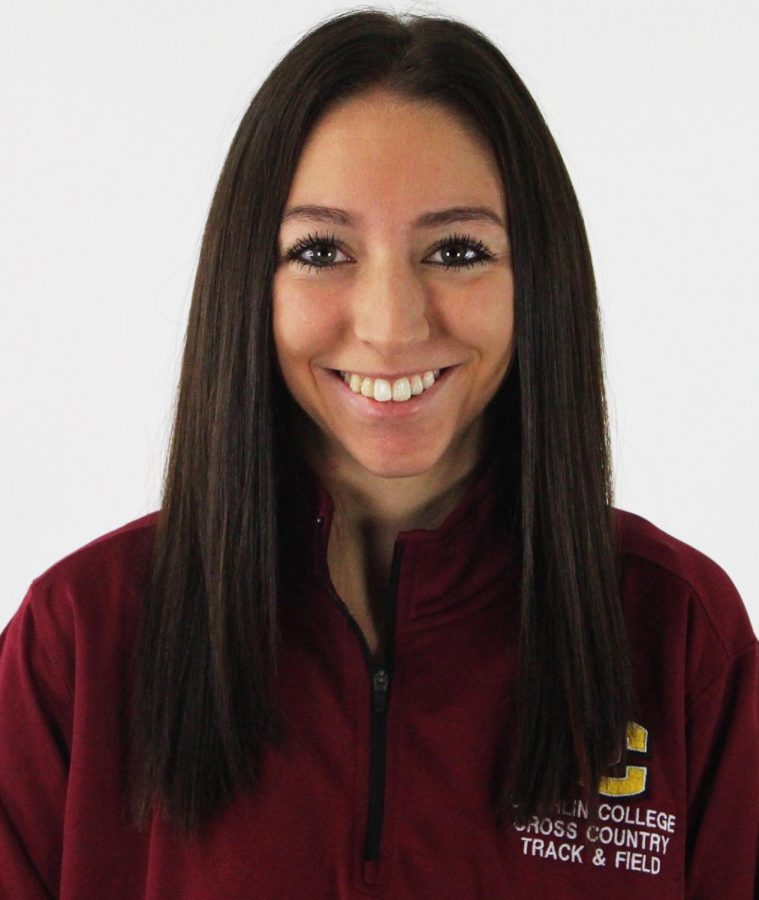 College second-year Grace Hayes is a member of not one, but two varsity sports teams. Hayes has competed with the soccer team for the past two years. After seeing a significant increase in playing time on the soccer field in her second year, Hayes recently decided to join track. Despite having only been on the track team for a few months, she has found early success, and has already run the fourth fastest 60-meter time in the North Coast Athletic Conference and been named the NCAC Women’s Sprints/Hurdles Athlete of the Week. In her free time, Hayes enjoys painting and attending on-campus performances.

How is track different from soccer?

In soccer, you’re constantly relying on 10 other people to carry their weight. And with track, it’s like a different type of carrying their weight. It’s more about supporting each other through cheering and working hard at practice so that we score well as a team, but it’s not like every single action they do affects my performance; in soccer, it does.

What are similarities you see between the soccer team and the track team?

Definitely support. When people say it is a family, it really is. I’ve been with [the soccer team] for two years and have only been with track for a couple months, but there are people I can rely on constantly, share textbooks with, go to with any problems. The track athletes have welcomed me so much. I feel that way with soccer, too. There is such a strong connection with everyone. It’s the same across the board — both sports are so good with being supportive of each other.

Did you run track in high school?

I only did up until my sophomore year, and then I quit because I was very overwhelmed and busy. I did not run at Oberlin last year, and then they convinced me.

What made you decide to join the track team?

The coaches are extremely persuasive. They’re very good at their jobs — at recruiting. Last year, soccer really helped with getting me acclimated to the campus. This year, I felt less stressed and more used to the workflow here. I was able to actually picture myself doing more. I had a conversation with the coaches, and they were just really positive. I went out, met a lot of the teammates, and just took it really slow, and it seemed like a really good fit.

How does it feel to have this early success in track?

It feels good, obviously. I didn’t expect that because I hadn’t run in about four years. This comes back to them being such good teammates. At first, I was actually a little nervous. I didn’t want to come on and take anyone’s spot away from them, but everyone was just really proud of the success and saw it as just helping the team. It felt really good that I could actually contribute such a large amount of points to the team. And it feels good to be good.

Do you consider yourself to be more of a soccer player or more of a runner?

I would say running is a part of my life in a different way than soccer because you don’t really have to think about it as much. Any time I’m stressed out, I can just go for a run. But when it comes down to sports, I consider myself a soccer player. I wouldn’t really tell people, “Oh yeah, I’m a track runner.” I’d say, “I’m a soccer player, but I run track and enjoy it.”

How do you think athletics has impacted your time so far at Oberlin?

Both soccer and track are such big communites. I talk to so many athletes, go to so many games. It’s just its own little community that is always extremely supportive of each other and fun to be around. It’s helped my academics a lot because it got me organized. There’s constantly people to ask for help, people who have taken classes that you are going to be in. People are willing to tutor. There are so many connections within teams that you can always find someone to help you. That really helped me through my first semester with things like figuring out how to register for classes and where buildings are. For little things like that, athletes are always the first ones I turn to for help.

Do you find it difficult to balance academics and athletics being a dual-sport athlete?

Well, it’s new now, but I originally thought it was going to be extremely hard. That’s why I didn’t want to do track at all. But after soccer season this year, I found it harder to balance my time without soccer. It’s such a nice structure to my life that, without soccer, it felt weird. I didn’t know what to do. Being a dual-sport athlete is actually extremely helpful in my schedule, and it makes things easier to balance because I only have a certain amount of time to get things done. It makes me more organized and better at planning ahead.

Besides sports, what are some things you like to do?

I’m a big reader, and I really like art and painting. I live with a non-athlete, and she and I have gone to different shows on campus like slam poetry and dance performances. Honestly, I like to try to support anything that the Conservatory puts on and any art on campus.

You said you paint — do you have a specialty?

I like acrylic paint. In high school, I took AP Art and was planning to be an Art major at Oberlin. Then I had a change of heart. So now I just do it for stress relief and fun, but yeah, I just like painting.

Do you dabble in any of the other arts?

No, I’m not skilled in that way at all. I’m not musically inclined. I can’t sing, but I love seeing everyone else do it. I think that the arts provide a good mix between athletes and non-athletes. A lot of people on track perform with the AndWhat!? dance team, and some people are in plays. I think that’s another way to get involved. All of my teammates do these things, and I get to go support them in non-athletic ways.

Do you have any goals for the rest of the track season or next year with soccer?

In track, I want to place at the conference championship. Honestly, I want to be in the top five. Then, for soccer, I just really want to get to the NCAC tournament. My freshman year, we were so close, and then this year was a rebuilding season; I think we’re in a really good place to be able to do that next year.