“The Wild Beast of the Bungalow” Premiered at Warner Hall 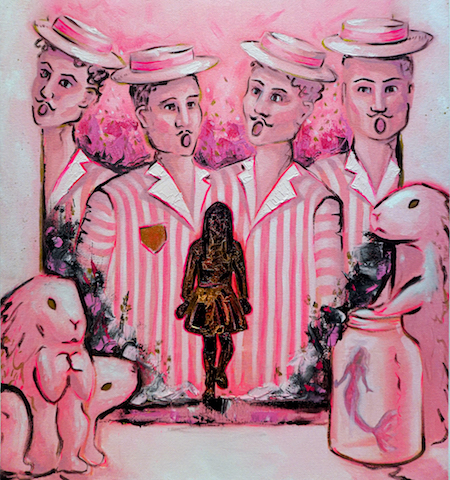 College fourth-year Steven Mentzer’s artwork for "The Wild Beast of the Bungalow" features the main character, Girl, amongst a pink barbershop quartet.

The Winter Term Opera The Wild Beast of the Bungalow premiered this past weekend in a whirl of pink décor, human-sized prairie dogs, and singing chickenpox. Composer Rachel J. Peters describes her work as both “opera that sounds like musical theater” and “musical theater that sounds like opera.” For example, The Wild Beast features traditional opera with sparse orchestration, but also a libretto by Royce Vavrek sung in a barbershop quartet and sixties girl-group style. The opera was born when Vavrek solicited Peters’ distinct compositional style to accompany a libretto he wrote inspired by Sheila Heti’s short story, “Mermaid in a Jar.”

The unconventional work takes place primarily in the mind of an 11-year-old girl learning what it means to be an adult in what Peters calls the “post-empathy era.” The main character, Girl, sung by Conservatory third-year Caroline Wolfe, performs violent antics with her stuffed animals that reflect the shouting matches outside her bedroom door between her drunk and unfaithful parents (sung by Conservatory third-year Erica Thelen and fourth-year Colin Anderson). She rages against her mermaid in a jar and terrorizes a family of prairie dogs after they adopt her as one of their own. After her mother kicks her father out of the house, Girl develops chickenpox resembling her mother’s shingles.

Director Christopher Mirto described that he wanted the audience to be shocked by this gloomy fantasy land.

“I wanted the set design to kind of punch the audience in the face with its brightness and quirkiness, and then out of all the pink the rest of the show emerges,” said Mirto.

Mirto also described his delight at seeing the choices that the student actors made in only a month of rehearsal. While this short period may be the perfect amount of time for other Winter Term projects, it’s barely enough time to put on an opera. The cast spent one week learning their music and another week rehearsing. The third week was tech week, and the fourth was the week of performances that started on Wednesday, Jan. 29 and lasted until Sunday, Feb. 2.

This short time frame made the production all the more impressive. The musicians, conducted by Joseph Hodge, executed difficult rhythms and oscillating meter changes. Remarkably, opening night was the first time the production was performed with more than a piano accompaniment and with the parents’ frame narrative, which is a story within a story. The effect was a sequence of bizarre, dark fantasies framed in bright pink and pop culture references to a barbershop quartet, both of which were Mirto’s ideas.

Vavrek’s libretto skillfully toed the line between comedy and tragedy. During the talkback after the Saturday performance, he said that his “black comedy” is meant to get the audience to wonder what it means to be an adult and who the real adults in the story are. Peters said that she feels that the world has finally “caught up” to this piece, citing its relevance in a pop culture that promotes indifference toward others.

“It’s the moral of the opera if there is one,” said Peters. “I thought specifically of the repeated line, ‘I didn’t ask to have to care for something,’ from ‘Mermaid in a Jar.’ The girl is imitating her mother, who said the same thing about her.”

The first part of the opera borrows much of its libretto from “Mermaid in a Jar,” as well as its title. The second part, “Prairie Dogs,” followed years later. The third part, “Fine and Dandy,” wasn’t written until last fall, when the first cast recording was made.

The comedic elements of the opera, though dark, added some much-needed relief to the reality of Girl’s life and the depths of her loneliness. When the cast came onstage at the end of the talkback, Anderson shared his insight into “Prairie Dogs,” the longest section of the opera, in which Girl asks a family of prairie dogs to adopt her. The prairie dogs do adopt her, but she ends up threatening them while wearing a predatory hawk costume.

“The girl knows what she wants,” Anderson said, “but it still ends badly because she can’t imagine anything else.”