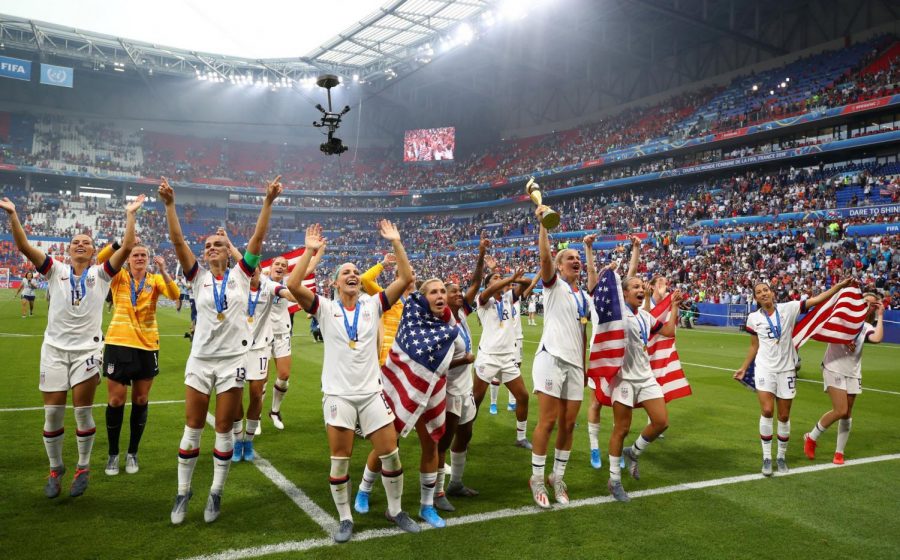 This Winter Term, while watching the United States Women’s National Soccer Team game, we became simultaneously filled with pride for our team and couldn’t wait to don a USWNT jersey — printed with the name of any one of those fabulous players — and flaunt it front row at a primetime televised game. We allowed ourselves to be swept up in the frenzy of support for the future of women’s sports.

The USWNT ultimately won the game against Costa Rica, as part of the Olympic qualifying tournament, by a score of 6–0.

We have both played soccer for most of our lives, including here at Oberlin. We’re also avid soccer fans, but most of our memories of the sport revolve around watching men’s soccer. We watched countless men’s World Cups and attended numerous men’s games, even idolizing men’s stars, like Ronaldinho and David Beckham. Amidst the many hours dedicated to pursuing our love of the game, very few of our memories involve watching women play the sport.

The USWNT’s recent rise to popularity was stunning to watch. To be clear, they have always been one of the best teams in the world — their four World Cup championships and four Olympic championships are evidence of that. However, something about the most recent World Cup squad has demanded the world’s attention. So what is it about the current USWNT that resonates with folks around the country and outside of it?

There are a lot of ways to describe this team, but one word in particular sums them up: unapologetic, both on and off the field.

Their swaggering attitude starts with their World Cup campaign titled “All Eyes On Us.” It is a widely accepted expectation that top-tier female athletes must maintain a certain degree of modesty and composure. Often, displays of confidence in women’s sports are mistaken — perhaps intentionally — for arrogance. The members of the USWNT are not strangers to these perceptions, and other female athletes, including gymnast Simone Biles and tennis player Serena Williams, have faced a similar reaction to their celebrations.

However, “All Eyes On Us” was an unapologetic declaration of the belief the members of the USWNT have in themselves and their abilities. The image of Megan Rapinoe’s celebration pose after a crucial goal — arms spread, head tilted up, and smiling to the crowd — has become an iconic symbol of this fearless confidence. The small, yet shockingly controversial gesture reflects the entire team’s attitude — they know their talent is legendary, and they refuse to shy away from celebrating it.

Although the most iconic, Rapinoe’s celebration was just one of several moments where the USWNT was accused of arrogance within the past year. Alex Morgan received criticism for “mocking” England’s women’s team after she pretended to sip tea after a goal, and the entire team faced backlash for celebrating heartily after every goal in a 13–0 finish against Thailand.

However, what critics failed to consider is that these sorts of celebrations are not only commonplace in most male sports — particularly football — but are actually celebrated as an integral aspect of the competition itself. It was not the USWNT’s celebrations that people found fault with — it was the fact that the celebrations demonstrated the fearless confidence of women on an international stage.

The USWNT’s displays of confidence and fearlessness are not limited to the field either. After the numerous awards she received, including female athlete of the year and World Cup Most Valuable Player, Rapinoe used her acceptance speech to highlight prominent problems in the athletic world — notably racism and the treatment of Colin Kaepernick after he knelt for the national anthem to protest police brutality. The team is continuing its fight for equal pay through a civil lawsuit filed against the U.S. Soccer Association, alleging gender-based discrimination compared to the American men’s team. They received class-action status and are awaiting an official decision in the near future.

The team is heavily involved with LGBTQ+ activism, hosting Pride games — a few of the team’s LGBTQ+ members even created a gender-neutral athletic clothing line. Ali Krieger is an outspoken advocate for those with pulmonary embolisms, a condition that almost killed her in 2012. They have also worked for gender equality. After being recorded kicking a casual 50 yard field goal — something many professional field-goal kickers struggle with daily — Carli Lloyd stated that she is contemplating trying out as a kicker for the NFL after she eventually retires from soccer. Alex Morgan has worked to normalize female athlete pregnancies as she continues to train with the USWNT seven months into her own pregnancy, and plans to return in time for the 2020 Olympic Games.

Finally, and most importantly, the members of the USWNT are fierce supporters of other women’s sports, as they frequently attend other sports’ games, lift other athletes up on social media, and support other teams — notably the WNBA athletes — in their fight for equality and equal pay.

The members of the USWNT support each other as friends, teammates, and women who are all struggling together to garner the respect they deserve. They unabashedly confront their adversaries with both confidence and respect, whether it be a team they’re playing on the field or Donald Trump on Twitter. Finally, they use their increasingly visible platform to draw attention to and gain support for several prominent issues.

The USWNT is an incredible example of what female athletes are capable of. Seeing young girls — and even some boys — walking around wearing Alex Morgan shirts, cutting and dying their hair like Megan Rapinoe, and dressing up as members of the USWNT for Halloween is unbelievably inspiring. Young girls will grow up knowing that it’s okay to be unapologetically confident in their abilities — athletic or otherwise — and that they should use their successes to celebrate and lift up other marginalized groups across any and all boundaries. The USWNT is an inspiration, and we’re glad that they are finally getting the respect they deserve.