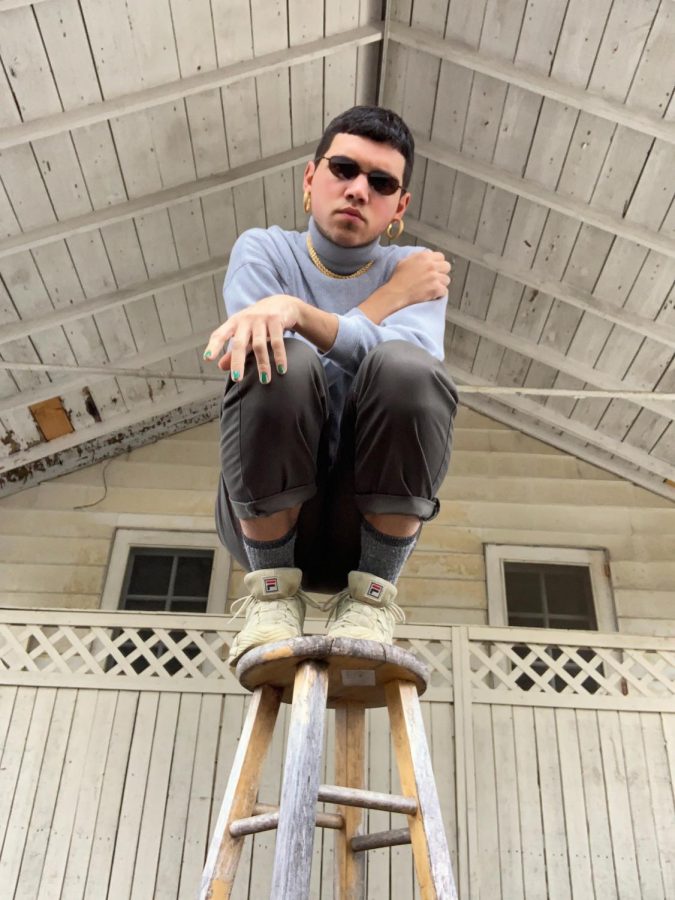 Mobey Irizarry Lambright is a double-degree fifth-year majoring in TIMARA and Comparative American Studies. They produce pop music under the name Bebé Machete, and they released their album “There Is Not a Metaphor That Can Contain” last June. Funnybone Records describes Bebé Machete’s sound as a blend of “salsa, hip hop, lo-fi, and experimental rock.” On Saturday at 4:30 p.m. and 7:30 p.m., Lambright will perform their senior TIMARA recital in the Birenbaum Innovation and Performance Space.

Could you describe what your senior TIMARA recital is going to sound like?

I am doing a mix of video pieces for 5.1 audio [which is] five speakers and one subwoofer, so that’s surround sound basically. A few of the videos are going to have live accompaniment. I have one video that’s using a motorcycle as a metaphor to talk about colonialism in Puerto Rico and also 2019 as a moment of resistance to colonialism and fascism across Latin America, and complicating the way the motorcycle operates within different contexts. In the Puerto Rican context, it was the best symbol of resistance because there was this massive caravan of motorcyclists during the protest this summer. But in other contexts, like in the protest in Chile, the people on motorcycles were the repressive forces. That piece is accompanied by three bassoonists that are going to be spread out across the room… I’m also going to have some of my pop music performed with a four-piece band accompanying me.

Do you film all the footage for the videos yourself ?

Yeah, most of it. Some of it, like for the motorcycle piece, is news clips and s**t from social media. [One of my] pieces is a love story between a security camera and a graf ti tagger that has all this folklore around him in Hartford. Basically there’s this guy, Veoh, who is really prolific to the point that there’s a lot of conspiracy theories around him. There’s this really ridiculous blogger that is convinced that his tag is summoning a demon. I ripped [the video] from YouTube and then chopped it up in the score.

Then I have two pairs of monologues. One of the characters is Veoh, who’s this prehistoric demon that has existed in Hartford since before people lived there and witnessed indigenous people settle, and then Europeans colonizing Hartford, and then Hartford [becoming] what it became — with all the white flight and gentrification and police brutality. The other character is a security camera who’s witnessing all these tags appear and slowly critiquing their own position as surveyor for the Hartford Police Department and then potentially falling in love with Veoh right at the end.

Are there any Bebé Machete songs in your recital?

There are four Bebé Machete songs.

How would you describe the mood of the music that you make?

My goal for this recital and [for] all the art and music that I make is to offer a space for audience members to imagine. Specifically, I’m thinking of imagining a world beyond colonialism and also offering spaces to critique capitalism and white supremacy and patriarchy. But sometimes that’s through pretty dif cult discussions of violence and other times it’s through offering spaces of joy. And with my pop music, I really try also to figure out ways to advance my political lyrical content with rhythmic content that alludes to genres that are innately political. I’m Puerto Rican, so I’ll often draw on Puerto Rican music, like salsa and stuff that comes out of the Puerto Rican subset of the civil rights era.

What does a world beyond colonialism, specifically in Puerto Rico, look like to you?

So in the motorcycle piece, there’s a minute-long segment where it’s just the words “No colony, a world without blank” on the screen. And the audio is just the sound of somebody inhaling about to speak, but not saying anything. I think that’s the question that I’m playing with a world without colonialism having ever existed is a world that’s totally unimaginable. And it’s also a world in which I, as a mixed-race person, don’t exist, and you don’t exist here, you know? But I think it’s integral to any social justice movement to start with imagination. Without imagining what other worlds are possible, we don’t know what to build toward. Practically, in Puerto Rico, I would love to see an independent Puerto Rico — not just independent by name, but a Puerto Rico that isn’t dependent on U.S. corporations to survive.

Is the motorcycle a recent image of Puerto Rican resistance?

Super recent. There were protests against the governor of Puerto Rico this summer and he was deposed. One of the most iconic moments of that protest was 4,000 motorcyclists crossing the island on Puerto Rico’s main highway and people being like, “What the f**k?” And the leader of that motorcycle brigade is called Rey Charlie and he’s just kind of like a folkloric character now.

Do you think that artists have an obligation to talk about political issues like colonialism?

Well, I think that artists that are public in some way owe their audience something. I don’t know if it always has to be advancing a political conversation, but I feel like there’s a certain level of care that’s really important. I care for my audience and I intentionally provide things that are accessible at some times. I don’t want visuals to be strobing too hard because I don’t want that to be inaccessible to people. I don’t want noises that are too loud. I’m not interested in hearing damage as an aesthetic.

I think that there is also a lot of power in music that is just about joy and having fun and providing spaces for people to have some sort of catharsis, and that is political in its way. It doesn’t have to be about a social movement… Sometimes I’m reading a line that only one person is going to get and then it’s for them. I have all these inside jokes that I write to my little sister.

Do you have any advice for younger musicians?

Trust yourself. I think a lot of decisions [that I had to make as an artist], I spent more time doubting than trusting and maybe that was a waste of time. Maybe [remember that] you know yourself the best.