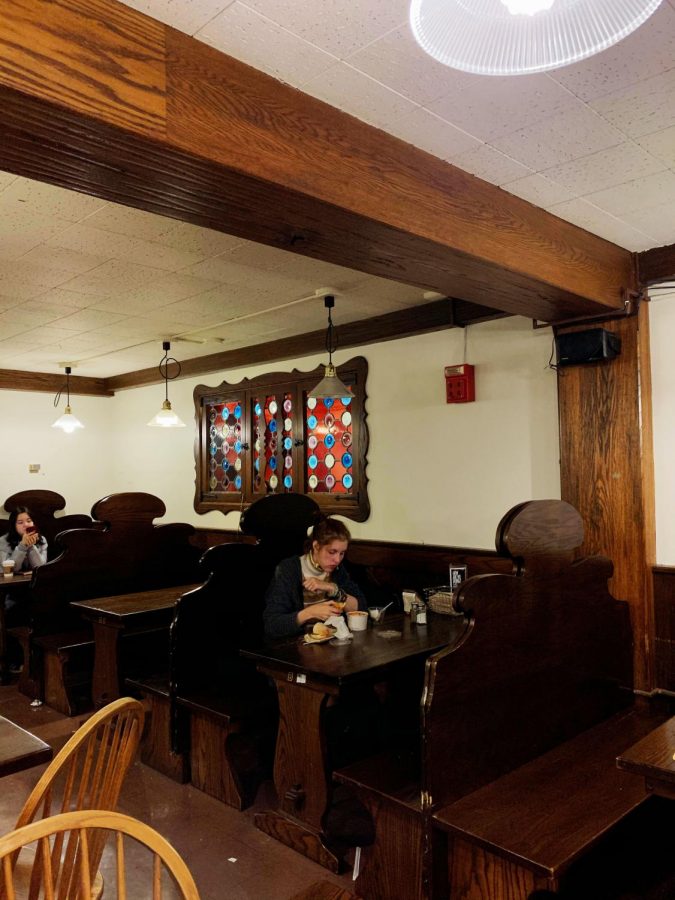 As of this semester, Fourth Meal — previously served buffet-style in the Rathskeller — is now being served in DeCafé in to-go boxes. Students can now purchase Fourth Meal the same way as all DeCafé meals: by choosing one entree, two sides, and a drink packaged in plastic containers.

Many students have witnessed significant changes to the location and structure of Fourth Meal during their time at Oberlin and some have expressed disappointment at these changes.

“It’s horrible,” said Joshua Rhodes, Conservatory fourth-year and former student senator. “I don’t agree with it. I think it’s stupid. It’s a low-blow — I very much am affected by it.”

According to Meredith Raimondo, vice president and dean of students, spatial limitations posed by the Rathskeller necessitated changes to the structure of Fourth Meal.

“That decision was part of a normal review of operations and in recognition that there were challenges and inefficiencies in serving out of the Rathskellar side,” Raimondo said. “The footprint of the kitchen and some of the traffic flow issues … could be improved by serving out of the DeCafé side.”

The newest adjustments to Fourth Meal are part of a long line of changes to the beloved Oberlin tradition. Current third and fourth-year students remember when Fourth Meal was held in the since-closed Dascomb Dining Hall. Dascomb was refurbished in fall 2019 and currently houses Student Health Services and Student Counseling services, as well as Campus Safety.

“[Dascomb Fourth Meal] was fantastic,” said Campus Dining Ambassador and College fourth-year Pearse Anderson. “That’s when I met a lot of my friends. You could just go from table-to-table and see a different group of people, whether it’s the Quidditch Team or the Rock-Climbing ExCo or the Dascombites who lived above the hall and would just walk down in their bathrobes. … I remember a lot of fried foods and a lot of good times.”

Even before Fourth Meal’s recent move to DeCafé, Anderson felt the Rathskeller wasn’t the ideal location.

“It’s darker, it’s smaller, it’s harder to interact with multiple groups of people,” Anderson said. “People were shuffled into their own corners with less of a continuous community throughout.”

Administrators emphasize that recent changes to residential life, including CDS, will not necessarily represent the end result.

“It’s a transitional moment in the dining program,” said Vice President and Dean of Students Meredith Raimondo. “Because [during] the four years that a student is here, they may not see the full evolution occur. Sometimes it’s a discontinuity between student time and institutional time.”

DeCafé alone has changed immensely in the past four years; previously, students were allowed to use a board swipe for any purchases less than or equal to $7.50 and DeCafé housed a smoothie bar and sandwich station. Since then, Sally the Salad Robot has been introduced, premade smoothies replaced custom ones, and now, Fourth Meal is served in to-go boxes.

CDS has also implemented several well-received changes. In fall 2018, DeCafé expanded its carry-out and grocery options by removing its seating area. During the same time period, staff and administrators have remained open to student input on CDS changes through working closely with campus dining ambassadors and introducing a hotline service.

However, Anderson appreciates the effort demonstrated by DeCafé staff to provide the best Fourth Meal experience possible under the circumstances.

“Corn Dog night was my favorite night of Dascomb Fourth Meal, so for them to bring it back has been really lovely,” Anderson said.

Raimondo agrees that the changes have compromised the social experience of earlier versions of Fourth Meal, and asserts that the administration is working to improve Fourth Meal moving forward.

“I would love to deliver a more robust Fourth Meal experience where we really rethink what that could and should be, from not just a food perspective but from a social perspective, which I think is part of what people miss about Dascomb,” she said. “That’s the key thing we need to answer. When we have facilities that can help us deliver the program we want, we will improve the overall student experience.”

Despite some steps being taken to replicate the previous Fourth Meal experience in DeCafé — including bringing music and beloved Fourth Meal figure Alan “Big Al” Jones into the new space — students feel that the to-go option is inadequate compared to the previous all-you-can-eat style service.

“I am a Conservatory student and Fourth Meal was the only time that I could get [an] all-you-can-eat [meal],” Rhodes said.

However, Ed Michalski explained in a Campus Dining Ambassadors meeting on Wednesday that Fourth Meal was never designed to be all-you-can-eat. In fact, one meal swipe should only have covered one serving. Still, under the new system, this one-swipe, one-meal policy is far more regulated.

Management has been attentive to student concerns, consulting focus groups, surveys, the CDS hotline, and maintaining open dialogue with the Dining Ambassadors, who host office hours and communicate with students via Facebook. According to Anderson, attendance at Dining Ambassador meetings has been higher than normal following the changes.

“I would want to understand what has changed in terms of people’s behavior that is not creating the same kind of Fourth Meal experience when it’s served on the DeCafé side, and to ask if there are things we can do to improve the experience that don’t require us to run the kitchen in an inefficient way,” she said.

At Wednesday’s Campus Dining Ambassadors meeting, much of the time was devoted to brainstorming ideas for Fourth Meal’s improvements within the current constraints. Ideas from the implementation of fog machines to weekly board game nights were suggested.

Dining ambassador meetings are held every Wednesday at 4:30 p.m. in the Biggs Conference Room in Stevenson Hall. Students can contact Bon Appetit managers at the hotline number, (440) 427-3093.