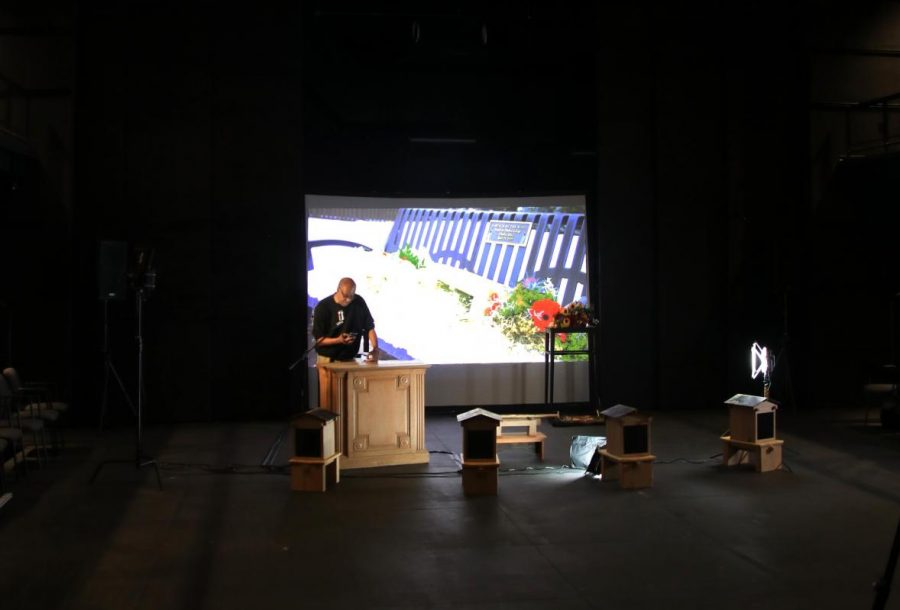 Only a few weeks after the beloved writer and Lorain native Toni Morrison passed away last August, Professor of Studio Art and Africana Studies Johnny Coleman began planning an event to commemorate Morrison’s first birthday after her death.

The culmination of Coleman’s efforts was a nine-hour remembrance service hosted by the Oberlin College President’s office. The event turned out to be a huge collaborative effort, with support from Africana Studies, the Art department, the Lorain County Community Foundation, the Toni Morrison Society, and more. In an interview, Coleman singled out Director of Audiovisual Services Leslie Joseph and Digital Media Engineer Kyle Hartzell for their contributions.

While organizing the event, Coleman reached out to everyone he could think of who might want to give a tribute to Morrison.

“My intention was to set up a dynamic possibility for people to reach from wherever they were to that space, [so that the event] was not limited by geography,” Coleman said.

He made announcements in church, at barbershops and barbecues, contacted the Cleveland Public Library and the Ohio Center for the Book, and talked to gatherings of pastors from all over Lorain County.

Associate Professor of Africana Studies and Comparative American Studies Meredith Gadsby was instrumental in contacting the founders of the Toni Morrison Foundation, many of whom sent in recorded reflections about what Morrison means to them.

At the service, participants made tributes in many different forms: reading excerpts of her work, speaking about how Morrison influenced them, dancing, or giving other performances. The whole event was framed by a slideshow of photos of the Oberlin bench from the Bench by the Road Project, which the Toni Morrison Society began in 2006 to provide historical markers and dedications commemorating the history of slavery.

Coleman and Professor Emeritus of Dance and Africana Studies Artist-in-Residence Adenike Sharpley, who is a Santeria Priestess, built and activated an altar under the bench that called to the Yoruba keeper of the crossroads, Eshu Elegba, in order to form a connection with Morrison, now an ancestor. This altar was recreated on either side of the projection screen, with the number of flowers increasing throughout the day to give the sense that the altars were active and growing.

In front of the podium were four speakers in wooden house-like structures that each played a different, continuous voice throughout the entire event. These voices were recordings of people reading Morrison’s work or testifying to the effect that Morrison had on their lives.

Coleman explained that this stream of voices emulates the auditory environments of blessings at Black churches, conversations at jazz clubs while the musicians are playing, and other traditional Black venues, to situate the memorial in the Black “milieu.”

“Morrison always talked about speaking to ‘[her] milieu’ and the rich, full interior lives of Black people,” he said.

It’s clear that a huge amount of work and planning went into this gesture, but Coleman said that he specifically left gaps of time “up to the creator,” so that people could reflect silently or choose to speak at the spur of the moment.

“Half of what happened I had no idea was going to happen,” he said.

In one of these unexpected moments, Pastor Phyllis Yarber Hogan from the Oberlin House of the Lord Fellowship spoke, although she hadn’t planned to do so. When she got up Tuesday morning, she said she felt that she had to.

“It was like she wrote [the book] for me,” Hogan said. “I carry Pilate [one of the main characters] with me every day.”

Hogan was one of many who spoke about how Morrison was able to articulate her lived experience in a way that no one else could.

“Toni Morrison made me uncomfortable, … but she helped me realize that I wasn’t the only one thinking these thoughts,” said Nina Pulley, OC ’18, in a recorded tribute. “Her presence in this world allowed me to imagine Black life in a different way.”

Throughout the gesture, it was evident that Morrison, writing in the Black literary tradition of Langston Hughes, Zora Neale Hurston, and James Baldwin, meant so much to people because of her incredible ability to articulate difficult truth.

“Just like any person, she spoke the truth, and the truth will live on,” Pulley said.