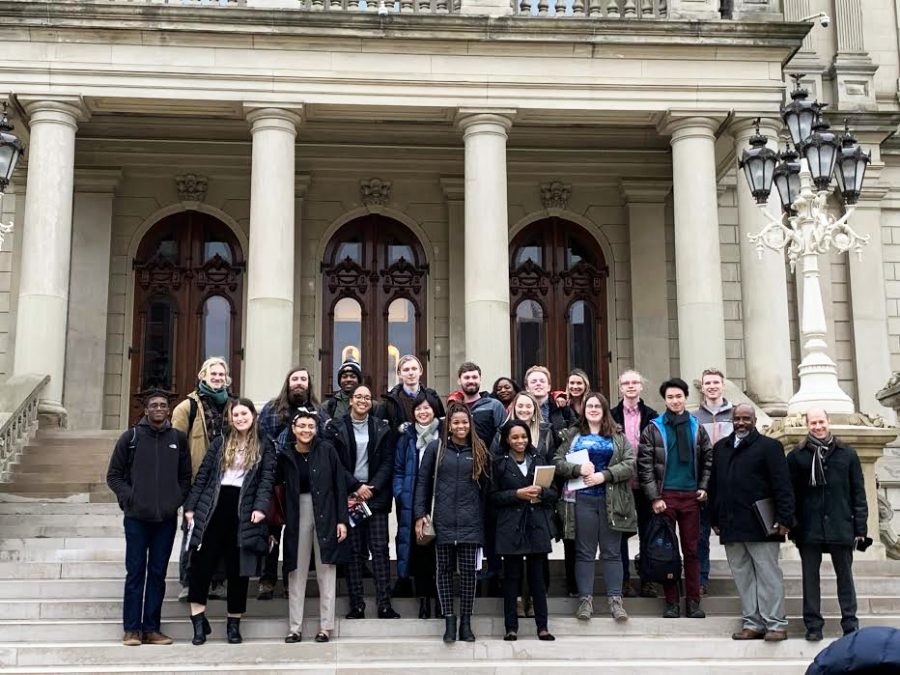 Oberlin College and Spring Arbor University participants of the “Bridging the Gap” Winter Term project in front of the state Capitol in Lansing, MI before they met with elected officials to discuss prison reform.

Oberlin College is no stranger to critiques of our political leftism. In an effort to reach across the aisle and encourage dialogue across difference, the Winter Term project “Bridging the Gap: Dialogue Across Campus in a Time of Political Polarization” brought together a group of 10 Oberlin students and five students from Spring Arbor University, a conservative Christian school in Michigan. Progressive philanthropist Simon Greer led the group, teaching the students dialogue techniques like active listening and storytelling skills.

“I think this is a moment in the United States where people’s ability to communicate across differences … is really, really important because we’re pretty polarized right now and don’t have many positive ways to engage across difference,” said Raimondo.

After the Oberlin students traveled to Michigan to meet the Spring Arbor students on their campus, all participants toured a vocational program at a correctional facility, where they used their dialogue skills in conversations with Michigan Corrections Organization board members, the Director of Michigan’s Department of Corrections, advocacy groups like the American Civil Liberties Union, and inmates. As a final group project, the students created plans for Michigan Corrections reform, which they all presented at Oberlin. Now that it’s been a few weeks since the program’s conclusion, participants have had time to process this intense experience.

Third-year Spring Arbor student Elizabeth Stewart reminisced on the friendships she cultivated with the Oberlin students during the program.

“I miss it a lot because when the [Oberlin] students were here, it was a time where a lot of other students weren’t on campus,” Stewart said. “It felt like … they [were] my closest friends, and they became my family and we were with each other for so long.”

Though friendship between these two politically polarized schools seems unlikely, Greer believes that it is possible to respect, and even love, someone with whom you have fundamental disagreements.

“I was even a little hesitant about calling it ‘Bridging the Gap’ because it can sound to people like we’re going to water down our beliefs,” said Greer. “And I don’t actually think that’s what we’re doing. I think we’re helping to see the truth by bringing in more perspectives … Maybe we have fundamental disagreements, but I could still like you. I could still really respect you.”

Participants said the “gap” between the students from both schools was surprisingly small. This may be due to the self-selecting aspect of the program. Both Stewart and Alexis Lewis, a third-year student at Spring Arbor, said that their centrist group was not representative of the overall conservative beliefs of their student body.

Oberlin College second-year Maleek Cusack felt that the lack of disagreement between the groups weakened the intent of Greer’s dialogue exercises.

“It felt like there were no stakes involved,” Cusack said. “After that point, we just needed to get to the criminal justice part of it.”

In the visit to the correctional facility, students did encounter intense situations and disagreements.

Both Lewis and Oberlin College second-year Darielle Kennedy have family members who are currently or formerly incarcerated. Kennedy said that this experience gave her valuable insight into the lives of correctional officers, and the project as a whole changed her life by giving her a voice in prison reform.

However, there were also moments at the correctional facility in which students were confronted with racist and homophobic beliefs. In one instance, a white student from Spring Arbor, who joined the project late, quoted a false statistic that Black Americans are 13 percent of the US population but commit 50 percent of violent crime. This statement was alarming for both the Spring Arbor and Oberlin students, especially because the student is part of the school’s campus safety.

“Somebody took him to the side and they told him that [the statistic is wrong], and they also told him the things that you say can get people hurt,” Kennedy said. “It gets people killed because not only do you believe stuff like that, but there are real police officers who feel the same way.”

Though this student’s comment sparked a long conversation, Kennedy believes that the student didn’t learn anything from the experience, and the student emailed his campus safety boss to defend himself.

In another situation at the correctional facility, a correctional officer said that he didn’t believe that same-sex couples make good parents. The chaplain of Spring Arbor also said that sex between two people of the same gender is sinful when he talked to the “Bridging the Gap” participants, a view reiterated in the 2019-2020 Spring Arbor Community Guidelines.

“How do you give validity to a view like that?” questioned Cusack. “Simon [said] you don’t have to move to listen to and respect someone else’s beliefs. And I was like, ‘No, if I’m respecting this belief, I do have to compromise something within myself.’”

College third-year Austin Ward said that it is more difficult to find common ground when it comes to explicit attacks on your identity.

“I think [in cases of] people saying racist things, people saying homophobic things, really insulting things to people’s identity and character — I don’t know if the gap can be so easily bridged,” Ward said.

Lewis appreciated the way that Simon Greer allowed the class to empathize with others while never budging in their firmly held beliefs.

“[Greer] talks about empathy and accountability, and for me, I know if I get upset at a person, I want to hold them accountable,” Lewis said. “But if they started talking about their feelings and stuff like that, I tend to get more on that empathetic side. And I felt like that was like me letting them off the hook. And Simon was saying, it’s not like you can’t hold a person accountable and still empathize with them as a human being.”

Whether or not the “gap” was “bridged” between the two student groups depends on whom you ask. Cusack believes that the project will be marketed as a complete success, but he’s not convinced that the project accomplished its goals.

“If you’re going to market this as some kind of revolutionary approach [through] having dialogues [between] politically divided college campuses, maybe actually have people who are diverse before screaming from the rooftops that the program works,” Cusack said. “I don’t know if the program worked. It’s inconclusive.”

For many students, though, the program was a step in the right direction. Stewart had a positive experience with the project, and she recalled a particularly touching moment in which a non-religious Oberlin student commented on her faith.

“When he left he said to me, ‘I love the way that you live out your faith,’’ Stewart recalled. “And for a Christian, that is like the biggest compliment that you can receive. … the biggest fear of a Christian or someone my age is that we’re oppressing someone else or that we’re aggressive with our beliefs and we’re forcing our scripture on someone else, and when he said that to me it changed my life.”

Ward, who is from Dayton, was originally interested in the program because he hopes to work in the public sector, and he finds value in speaking to those he disagrees with.

“If I can’t talk to conservatives about things, then I won’t be as successful at my job,” Ward said. “If I want to stay in Ohio and [do] governmental work in Ohio and Southwestern Ohio, I have to be able to have productive conversations with people that think differently than me. This was really the first opportunity at Oberlin that had offered me exactly that.”

In April, the Spring Arbor students will come to Oberlin for a reunion. Greer hopes to expand this program to eight other college campuses next year and many more in the future.