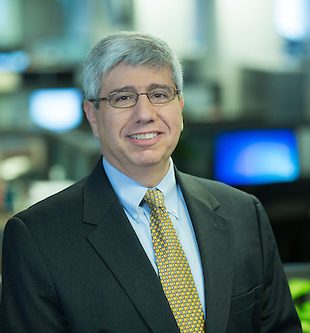 Aaron Zitner, OC ’84, is a news editor at the Wall Street Journal whose work focuses on using data to tell stories about politics and trends in America. He uses mediums such as video and interactive graphics to translate quantitative data into engaging and accessible stories. While at Oberlin, Zitner was News Editor of the Review and majored in English. Zitner is visiting campus as part of A Disrupted Media Landscape: Skills, Perspectives, Solutions, a journalism and media symposium co-hosted by the Review and The Grape. On Saturday, Feb. 29 at 11 a.m. in Mudd Center 113, Zitner and Rani Molla, OC ’08, data reporter for Vox and Recode, will lead a data journalism workshop. Participants will get a look behind the scenes of how journalists like Zitner and Molla use data and visuals to craft compelling stories. Visit disruptedmedia2020.com for more information on the symposium.

Can you talk about the work that you do right now at the Wall Street Journal?

I have a really great, privileged job. I do two main things. I work on the Wall Street Journal-NBC News poll, which is one of the gold standard political polls in this country; it’s gone on for 30 years, so we have 30 years of data about politics, but also about the country and how it’s changed. Everything from family structure and parenthood, to “Do you have a tattoo? Do you know anyone who’s had a tattoo? What values are important to you? Is having kids important to you? Is making money important to you? Is patriotism? Is religion?” So we have this great dataset about America. And on top of it, we have topical questions about Bernie Sanders versus Joe Biden. But if you go back, it’s John Kerry versus Howard Dean versus Wesley Clark. And you can go back in the archives and history kind of pops out from these poll questions. I try to also go back and find deeper insights about America from the poll.

Wow, that’s so cool. When you were talking about polls earlier I assumed it was just political polling.

We used to treat it entirely as political — but hopefully we can bring some depth to it. We just hit our 30-year anniversary so I did one project that covered the 30- year period that said, “Here are the main themes of the last 30 years as found in the poll numbers.” One [theme] is an America that becomes more comfortable with diversity, with changing social roles, with changing gender roles, with gay marriage, with women in the workplace. But the second story is of an America becoming more polarized. And these two stories are intertwined because the diversity I think is driving some of the polarization.

I think after the 2016 election, so many people were so blindsided by the results, that I think there’s some hesitancy around the validity of polling. I wonder how you would respond to that.

I find this very interesting because there’s 2016 and what happened, and now polling has changed. So for 2016 I have two answers: I have the defensive answer, and then I have the less defensive answer. The defensive answer is we didn’t get it wrong. At the end we said that Hillary [Clinton] was going to win by about four, which is also what The Washington Post poll said and the Fox poll might’ve also said that — there kind of was a convergence of Hillary up by four and she won by a little more than two so that’s within the margin of error.

If anyone got it wrong — and this is still the defensive answer — it was the state polls and they probably got it wrong for two reasons. One, they were not weighing their samples for education, so they weren’t finding the right balance of college and non-college. They were undersampling people who don’t have college degrees. And they were undersampling Trump voters. Two, there were a lot of people who were negative to both candidates. They didn’t like Hillary, and they didn’t like Trump, and a lot of them broke at the last minute, and they went for Trump. So if you weren’t polling right at the end, you weren’t going to catch that shift. So that’s the defensive answer. The defensive answer is, “Nothing’s broken, we’re fine, we called the election at four points and it ended up being two.”

The more honest answer I would say is: That’s still all true. But we didn’t tell the right story. The numbers were right, but the story was wrong. We had Hillary Clinton up by like 10 points at some [times] in the year — and maybe she was up by 10 points — but we had the numbers in front of us, and I think we didn’t have the imagination to use the numbers to their best advantage. We were very focused on the push and pull around Trump. We were very focused on the fact that for everything he did that brought a voter into him, he was alienating another voter and we should have paid more attention to the mixed feelings around Hillary Clinton.

The other thing that’s interesting now though is the kind of polling that we do, — telephone polling with live interviewers — has gotten very expensive. It’s gotten expensive because response rates have dropped and I mean, look, I don’t call anybody on the phone, I text them first and say, “Is it okay that, you know, do you want to talk?” And people tend not to pick up numbers they don’t recognize. It’s hard to get through to people on the phone.

So you majored in English and you worked at the Review. Did you know that you were so interested in telling stories through this very technical medium?

None of what I do now was in my mind. I was pre-med, and then I realized I didn’t want to do that. I thought being a doctor would be a way to see the world and travel around. And in the end, I think I pictured myself being in a hospital or a doctor’s office all the time and I wanted to be out there — and journalism gets you out there. When you have your notebook, you can go and ask people questions and you can go to places that you’re not so comfortable going to.

By my third job I was working in New Hampshire. I sat in on a murder trial of a kid my age, you know, he must’ve been 23. He was developmentally delayed in some way, but he had been in jail for a long time. [He was on] trial for murder, and I would go to the trial every day. I would see him and his lawyers wouldn’t let him talk to me.

He was acquitted and I followed him when he left the courthouse. He went to an apartment nearby where his father was and finally I got to talk to him. It was just amazing to talk to this guy after seeing him in court. He had been in jail for a number of years awaiting trial and he was just acquitted. He wanted to go back to the place where he worked — he worked at like in a municipal garage — and I offered him a ride. And then I was driving this kid who was my age and had just been acquitted of murder. I would have a lot of experiences like that. Journalism is a great way to have contact with things I couldn’t otherwise have contact with.

For people who can’t make it to your talk Friday or Saturday, what do you hope to cover?

I have two main things that I hope to tell people. The first: The conundrum of journalism is just when the finances get hard. Local journalism is dying; people aren’t paying for it. Fastball journalism in the age of Trump is doing well. But just when journalism has this financial challenge, at the same time, there’s this explosion of storytelling techniques and creativity. I mean, we all see the podcasts and visual journalism and data journalism and new templates. There’ve been more new ways to tell stories, delivered to your cell phone, delivered to your smart speaker, than ever. I mean we were very, very text-based until just a few years ago and now we can combine video, graphics, photo into a package to bring people to a place and get them to understand something better than ever. And it’s really exciting. So one thing to convey is that this set of digital storytelling tools, audio, video, graphics is really great and this has made journalism very exciting.

The other thing is that I want to be sure people know how much newsrooms have changed and how much job functions have changed. And I mean in just the last few years. One thing that I’ll point out is in the 2016 election in the Washington Bureau, we had one person doing graphics, we had one person doing video, and then we had like a junior video person. There was more of that staff up in New York, but that’s what we had right around us. Today, for this election, we have five people to do graphics instead of one. We have three people who have a job function that didn’t exist, which is data reporter. We have a census expert, we have a guide to political data, and we have someone who does all kinds of data stuff. Those people, those job functions weren’t there a few years ago. And we have me and a partner working on demographic and polling data. Beyond that, we’re really not just a journalism company; we’re a technology company that does journalism. We have teams that didn’t exist just a few years ago. Anytime you see a cool visual of any kind where the stuff is moving on the screen, someone had to code. We have people who are trying to take the best story formats and turn them into templates so that me, who is unskilled, at my desk can do that cool thing with point and click or drag and drop.

We don’t want to have to have someone spend three weeks building a cool thing every time. So we have tools and templates teams, we have a lot of people doing just engineering of the website. We have a podcast. We have a much more robust video team that’s doing everything from Twitter videos to news and explainers of the moment, all the way up to stuff that we’re trying to feature kind of documentaries. We have [Search Engine Optimization] people who just try to maximize our impact. We can monitor minute to minute how much something’s being read. But now we have a lot of people who are really working with the data to try to figure out how to serve the right story to the right person at the right time and to segment our readership because not everybody might want the same right story at the right time. So it still is all about the story. It’s still all about developing sources, breaking news. Nothing is more important than getting a scoop, but there are just a lot of different positions someone can play in a newsroom now that didn’t exist just a couple of years ago. And I want to convey that to anyone who’s interested in going into journalism.