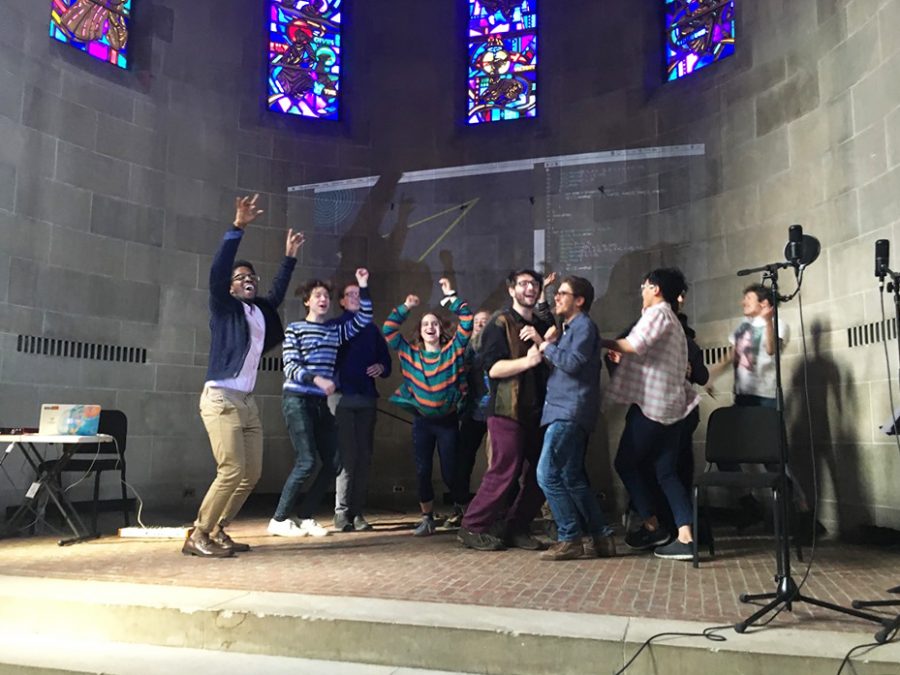 Double degree fourth-year Max Addae dancing with audience members at the end of his recital.

At the end of double-degree fourth-year Max Addae’s junior recital, audience members danced on stage as the Technology in Music and Related Arts and Computer Science major coded live beats. The recital, which was performed in Fairchild Chapel last Sunday, was aptly titled Algorhythm, a phrase that refers to the combination of computer algorithms and music used throughout the show.

In this performance, Addae used his coding skills in multiple creative ways, capitalizing on the intersection of his two majors to create one beautiful show. A computer screen was projected onto the wall for the show’s opening, and Addae typed in new codes to change the rhythm of the first piece.

Later in the recital, a piece titled “Short-Lived” caught the audience’s attention. “So fleeting is a thing called life,” Addae said at the start of the piece, which was based on the poem “A Fleeting Image” by Avi Fleischer. Then, he raised his phone, and the music suddenly started— moving like wind from speaker to speaker in a surround-sound fashion.

According to the program notes, a recording of the opening line was sliced into short grains of sound that were randomly selected and output to various speakers in the space. The theme of the piece was the fleeting and uncertain nature of life, and Addae hoped this “randomness” of sound output captured that.

It’s clear from this recital that knowledge in computer coding can lead to a world of creative musical opportunities. For Addae, computer science skills came before the TIMARA major. Addae began his Oberlin career as a Computer Science and Musical Studies major in the College, but he applied to the Conservatory in the spring of his third year.

Just two semesters after applying for the major, Addae was able to put together an innovative performance, with help from both TIMARA faculty and online tutorials.

“I was kind of on my own in terms of learning how to combine code with my music,” said Addae. “But I have online resources like YouTube and tutorials and stuff like that. Online just made it so much easier, while also still having the support of the TIMARA community as a feedback space to just like workshop ideas with them and see what they thought about them.”

Addae’s faculty advisor, Visiting Assistant Professor of Computer Music and Digital Arts Eli Stine, OC ’14, also studied Computer Science and TIMARA. Stine was able to help with certain aspects of the recital, such as the surround sound in “Short-Lived.” Stine explained that his computer science knowledge allows him to create various tool sets that generate visuals or audio.

“I’ve made digital musical instruments that you can perform over like multichannel loudspeaker surround sound systems,” Stine said. “I’ve made generative video systems where they take in a microphone and then generate visuals from that. And in addition to that, just a bunch of other pieces of software that I use on my own to make sounds.”

Computer Science and TIMARA can intersect on a number of projects. Another TIMARA double-degree student, fourth-year Piper Hill, has a second major in Mathematics. While Hill said that he doesn’t generally use “computer science” in his music, he recalled a few projects that have used programming.

“In my junior recital, for example, I programmed a patch in software called ‘Max’ that allowed me to change effects and spatialization on my voice using a Wii remote,” Hill wrote in an email to the Review. “I’ve also used Wii remotes and Max before to create a virtual Chu Taiko Drum in a collaborative composition with [College third-year] Will FK Tokunaga. Recently, though, I have just been making pop music in Ableton, which doesn’t really involve computer science knowledge, but definitely heavily relies on technology.”

“There’s the sound design; there’s the recording engineer; there’s live performance,” Addae said. “So I don’t think anyone necessarily needs any sort of skill set because you can just really make your own out of what you have, which I think is the best part about the major.” “It’s not that everyone has to have a certain destination in mind.”

Even though these skills aren’t required, the combination of Computer Science and TIMARA skills is particularly exciting, especially in the case of Addae’s innovative Algorhythm recital.