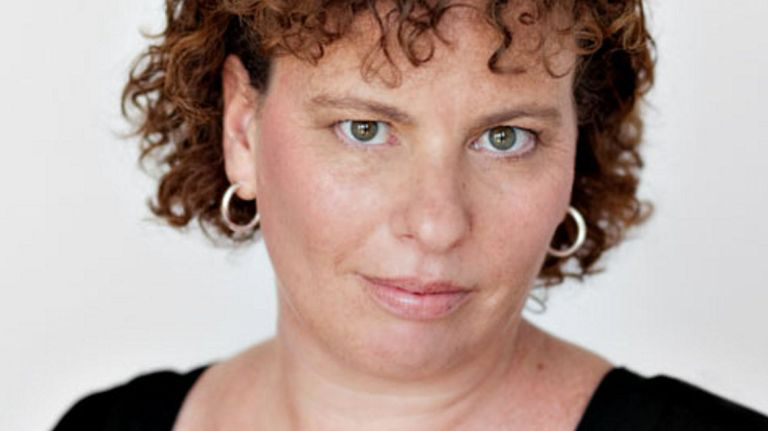 Anne Trubek, OC ’88, is the founder of Belt Magazine and Belt Publishing. After graduating, Trubek returned to teach at Oberlin as a rhetoric professor from 1997–2015 before becoming a full-time freelance journalist, publicist, and entrepreneur. In addition to authoring a number of books, Trubek’s work has appeared in The New York Times, The Atlantic, Wired, and many other publications. At Oberlin’s journalism symposium last Saturday, entitled “A Disrupted Media Landscape: Skills, Perspectives, Solutions,” Trubek spoke about independent publishing and how to pitch stories.

What persuaded you to return to Oberlin for the journalism symposium?

I taught at Oberlin for 18 years and I mainly taught journalism, and in fact, I was involved with organizing the symposium that we did in 2011. So I thought that it was great that you all were doing this again. And honestly, everything was presented really well to me, so I thought it would be fun to help out if I could.

As a professor, what inspired or encouraged you to explore journalism as a career?

Definitely teaching. I love teaching the students and [being] so engaged with the ideas and concerns that [the students] brought to the classroom. [I was] thinking about that in terms of the topics that I was writing about, wanting to be able to write about them for a larger audience and not just for other professors. I also had a very unusual situation at Oberlin — I had a half-time position, and I got divorced, so I needed money. So I started doing a lot of freelancing as a way to bring in more income, and then that just sort of snowballed to becoming my full-time job.

It must’ve taken a lot of courage to walk away from a tenured position to do freelance. What were you thinking about when you made that decision?

Well, it took me a long time. There were a couple of years I was on unpaid leave, and then I resigned my tenure. You know, everyone says you’re crazy if you leave a tenured position. I had internalized a lot of that, and I was worried that I was making a wrong decision. I’d saved up money for a few years and got enough confidence in my ability to bring in money, and realized that I was going to be able to succeed.

Both your magazine and your publishing company embrace the term “Rust Belt,” which can be used derogatorily to refer to areas of the Midwest that have experienced deindustrialization and economic decline beginning in the 1980s. What is the significance of that term in your work?

I see it as a neutral term. I completely understand people who see it as a derogatory. I see it as simply a very, very apt description of the de-industrialized part of the Midwest. I like it. It has richness of texture and complexity as a term. Other terms like “Great Lakes Area” are just sort of more bland. So I do find that people’s responses to the term are interesting, and I respect all of them and understand that people don’t like that. But for me, it’s descriptive and neutral. I also think since 2016, the term has become more and more common, so it’s less and less surprising to people.

A lot of your work focuses on creating a platform for voices from the Rust Belt. What is the value of those voices being heard in the national arena?

It’s a really simple thing. I felt like there was a gap that I could help fill. That there were just a lot of fascinating stories and writers who have things to say about the region, and there was a huge hunger on the part of readers to hear that. I think that because both media journalism and publishing are so centralized in New York, it can be harder for people there to understand why these are not just “regional stories,” but are important and have huge audiences. Not to mention the fact that there’s like 60 million people who live in the region. I felt like there was so much that had been under-told and underreported about the region.

I also wanted to be able to help writers who might not get past conventional gatekeepers. I will mention that the press does not only publish about the Rust Belt now. … So our books now have a wider range of topics, but they still all have some commonality that’s rooted in our beginnings.

As you were beginning as a small publication and magazine, what were some of the challenges that you encountered?

Money, money, money! That was very hard. And also being taken seriously. We really wanted [the magazine] to be a place that was publishing complex stories that often didn’t shine a happy light on the communities that were involved. A lot of people didn’t like that. This is a region particularly that’s been beaten down, and they wanted stories about how great it is in Cleveland, or in Lorain County, or in Detroit. I think it’s great in all those places, but I wanted to be able to keep the complexity of the stories so that we weren’t either cheerleading for the region or beating up on it. But the fact that we weren’t cheerleaders I think disappointed people at first.

What role do small liberal arts colleges in the Midwest like Oberlin play in creating a platform for the complex stories from the Rust Belt?

I think traditionally Oberlin has not seen itself as part of its place, its region as much. I mean, definitely historically it sees its role, with abolition for instance. But I think that our default [instinct] is to often look to the coast. There’s a worry that if [Oberlin] becomes too identified with Cleveland or Northeast Ohio, it will be seen less as a national institution. So there is a tension there, but I think these are really interesting and energizing issues because there’s just a lot of possible solutions and things that can come from thinking about the college’s literal place.