Yeowomen Edged Out of First Place in NCAC Indoor Championships 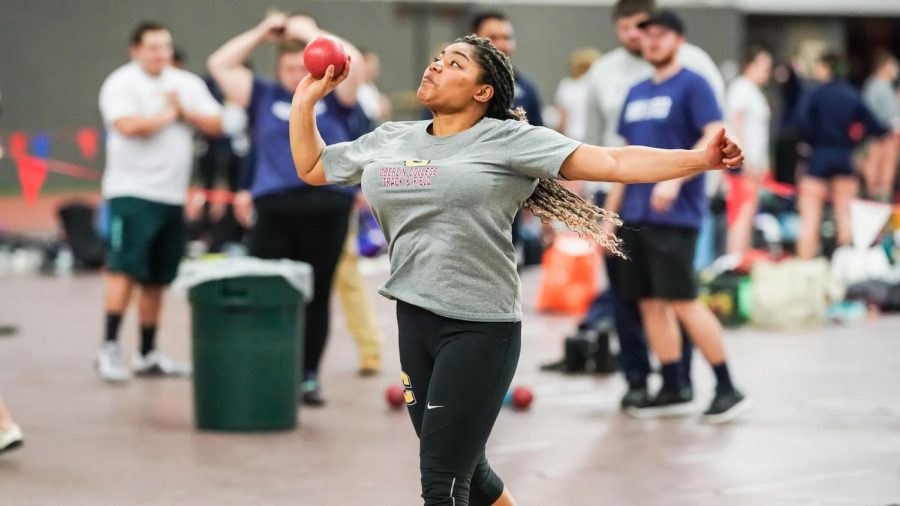 This past weekend, the Ohio Wesleyan Bishops put an end to the Yeowomen’s three-year dynasty at this year’s North Coast Athletic Conference Track & Field Indoor Championships. Ohio Wesleyan and Oberlin have been neck-and-neck for the past several years, with Oberlin clinching the first-place spot for the past three years. However, it was the Bishops that knocked the Yeowomen off their pedestal by just eight points, finishing 175–167 respectively.

“We have a lot to be proud of,” said College fourth-year and women’s track and field team member Maya English. “The weekend had so many personal bests and new school records. When it comes down to it we fought hard; they just competed better than us that day. I don’t think this meet defines us as a team nor does it indicate how hard we prepared leading up to the meet. I think the meet definitely left us feeling unsatisfied. Some teams might see this as a loss, but for us it’s just a new challenge.”

Going into the competition, the expectations for the Yeowomen were high. The team has been one of Oberlin’s most successful varsity teams in recent years, accumulating several titles over the past couple of seasons. This strength was in part due to dominant athletes like sprinter Lilah Drafts-Johnson, OC ’18, and thrower Monique Newton, OC ’18, who have since graduated. The loss of so many successful athletes and leaders was something the team was well aware of heading into the season.

“Coming into this year we lost a lot of really great talent,” said College fourth-year and team member CeCe Longo. “Either from people graduating or from people transferring. It impacted what we expected of the year. We knew we had to go hard and work hard.”

Despite the natural turnover that collegiate teams experience each year, the women’s track and field team was still expected to be a high-scoring force to be reckoned with at the meet. This was partly due to the experience and leadership of third and fourth-year students like English and Longo, but also due to several impressive first and second-year students.

“We have high expectations for every competition we go into,” said English. “We worked really hard during the preseason and overall had an amazing indoor season.”

“During our meetings every day, we talked a lot about how we can’t just expect to win because we’ve been winning the past few years,” said McClain. “We have to go out every day and at every single meet and prepare ourselves. [That being said], I think the expectations were just to compete well and, at least in my mind, to win.”

With such a decorated recent history, the Yeowomen entered the 2020 NCAC Indoor Championships feeling a good deal of pressure. However, this did not prevent them from a number of individual triumphs. Oberlin got six throwers, including Longo and English, in the top 10 on the scoreboard. In addition, college fourth-years Marija Crook and Oona Jung-Beeman clinched the top two spots in the mile. Despite these impressive individual accomplishments, it wasn’t enough. Still, the team displayed incredible sportsmanship throughout the meet.

“Honestly, I’ve never been prouder of my team than when we lost because I think we handled it with real grace,” said Longo. “It sucked. It sucked to lose, but we also stood up and clapped when OWU was announced the winner. We stayed a family.”

While the loss stung, for many members of the team it served as a reminder of several things they had been focusing on as a team all year.

Despite the initial shock of McClain’s first collegiate loss at a conference championship, she sees this as an important step for the team.

“I did not expect to [lose] in outdoor,” said McClain. “My teammates and I were talking and maybe this is what we needed to put that fire under our butts to win at outdoor conferences. A couple teams made an enemy out of me and my teammates, so [we’re] going out to prove that those previous conference championships weren’t flukes and that we earned those.”

Losing at conferences was a humbling and unexpected experience for all members of the team. However, as McClain alluded, it could have a positive impact on the team heading into the outdoor season.

“We’re hungry,” said Longo. “[For] fourth-years, this was our first loss. For people new on the team, this was their first loss. I think we’re focusing … not on other teams and what they’re doing, but on what we are doing and how we can perform and be better at outdoors.”

With this misstep behind them, the women’s track and field team is poised to regain its championship at the NCAC Outdoor Championships from May 1–2.