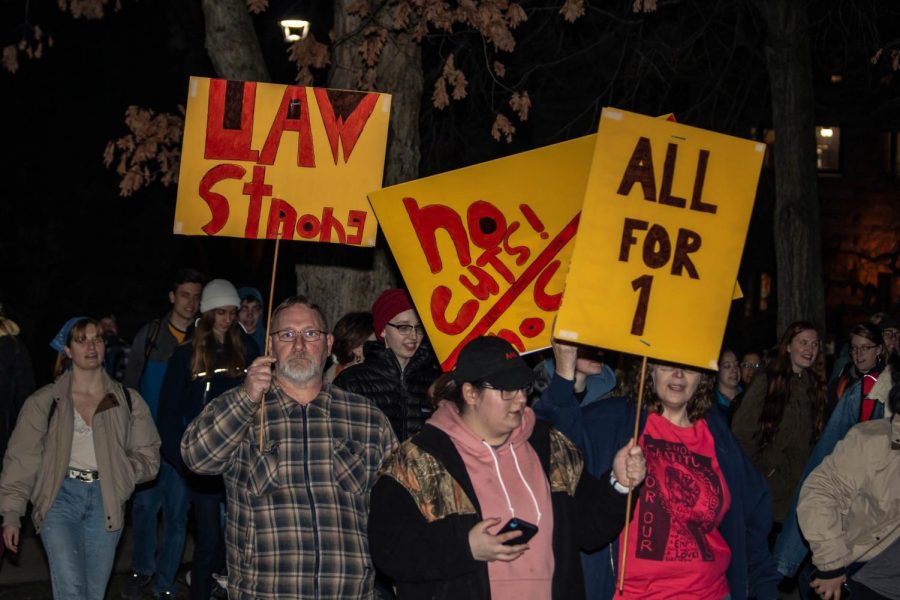 Campus controversy continues to swirl around President Carmen Twillie Ambar’s Feb. 18 announcement that the College is “formally considering” outsourcing dining and custodial services, a proposal that could impact jobs currently held by 108 members of the United Automobile Workers union.

While students and alumni have made their dissatisfaction with the proposal known, regional politicians and media have also begun to take notice — most notably Senator Sherrod Brown (D–OH), who circulated a memo Thursday voicing his support for UAW workers at Oberlin.

Yesterday, more than 500 students, faculty, staff, and alumni gathered in Wilder Bowl to express their concern over a proposal they characterized as “union busting” — a characterization President Ambar has rejected. The assembled crowd was addressed by a range of speakers including Erik Villar, chair of Oberlin’s UAW chapter; Claire Solomon, OC ’98, and associate professor of Hispanic Studies and Comparative Literature; and Henry Hicks, College third-year and Student Senate chair. UAW member Buffy Lukachko read aloud Brown’s statement of support for the union.

Solomon was the lone faculty voice of the evening. She decried the outsourcing proposal as “morally wrong.”

After listening to speakers, the group marched to the Hotel at Oberlin to escort five students to a meeting with representatives from the Board of Trustees, who are in town this week for their quarterly board meeting.

Prior to the meeting, Chair of the Board of Trustees Chris Canavan voiced his support of the outsourcing proposal.

“The plans are critical to carrying out the recommendations of One Oberlin — in this case, those outlined in Chapter IX of the report,” Canavan wrote in an email to the Review. “As the Oberlin community knows, the One Oberlin report was the result of wide consultation by the [Academic and Administrative Program Review] Steering Committee, [and] it was endorsed by over 80 percent of the faculty and … unanimously approved by the Board of Trustees. The report lays out a very compelling case for why its recommendations are necessary.”

Last Friday, UAW leadership met with senior College administrators for the first time since the announcement to formally begin conversations about how to move forward. According to Villar, that initial meeting focused largely on effects bargaining.

Senior College administrators declined to comment on the content of the meeting. Villar said that, after the meeting concluded, he called international union leadership to discuss how to proceed and was told to try to find a way to save every UAW job.

Then, over the weekend, Villar said he received word that the College was willing to move away from discussing the effects of bargaining if the union agreed to open its contract early. The current UAW contract is set to expire Sept. 30, and negotiations would typically take place over the summer.

According to Villar, the union membership decided via a Monday vote to move forward with opening the contract early.

“We were kind of forced to open up this early so that …we could be given the opportunity to be able to be heard and given a chance to explore different avenues,” Villar said.

Still, Villar acknowledged that deciding to open the contract early comes with difficult tradeoffs for UAW members, especially those that don’t work in dining or custodial services.

“If we can’t reach a viable solution by a certain deadline … then we would be given a WARN notice come May,” Villar said. “We would still be bargaining for the groups that are left, that weren’t going to be affected by this.”

A WARN notice refers to a 1988 labor law called the Worker Adjustment and Retraining Notification Act. Under the act’s terms, employers with more than 100 employees are generally required to provide 60 days notice prior to enacting mass layoffs or closing entirely. The WARN act does not apply to just unionized employees and does not apply to employees engaged in a strike.

Villar believes that the College’s willingness to bargain with the union if the contract was reopened — rather than taking a step such as issuing a WARN notice in the near future — was due in part to pressure from students, alumni, and other stakeholders who oppose the outsourcing decision.

“I’ve been in contact with a lot of alumni and various different folks,” Villar said, citing a petition circulating amongst Oberlin alumni that, by the time of publication, has accrued more than 2,300 signatures. “I kind of feel that that’s the only reason they decided to do this — it wasn’t because they had a change of heart.”

One of the petition’s commitments is that alumni who sign their names pledge to “withhold our financial support from the College until this decision is reconsidered.” Perhaps the most prominent instance of an alumni pulling their financial support came last week when Susan Phillips, OC ’76, published a letter to the editors of the Review announcing that she was indefinitely suspending the Susan Phillips Social Justice Scholarship Fund, citing opposition to the College’s act of “union busting” (“An Open Letter to Students,” Feb. 28, 2020). The fund had previously supported students pursuing summer internships related to social justice.

“As a lifelong union activist, I can’t in good conscience fund a social justice program when Oberlin’s administrators are contemplating going down the road of union busting,” Phillips wrote. “The outsourcing proposal runs completely counter to Oberlin’s long history of promoting social justice. Consequently, if Oberlin succeeds in busting UAW Local 2192, the scholarship fund will be terminated permanently.”

Dana Hamdan, executive director of the Career Development Center and associate dean of students, said that she was “saddened” to hear of Phillips’ decision, and that she has “deep admiration and respect” for the work that Phillips has done to support students. Hamdan added that the College will continue to support students pursuing summer opportunities related to social justice.

“This summer, the Career Development Center will be awarding students financially supported internships, including social justice internship opportunities similar to those that were awarded by Ms. Phillips,” Hamdan wrote in an email to the Review. “Students who wish to pursue internships focused on social justice can still apply for funding as they have done in the past. While we hope Ms. Phillips will reconsider her decision, we remain committed to supporting our students who want to get out into the world and do the good work we know they can do.”

In addition to the alumni petition, Brown’s memo made waves on campus, criticizing President Ambar’s announcement and charging the College with compromising its “history of standing for justice.” Brown is known for his vocal support of worker unions across the state.

“These workers deserve to keep their jobs,” Brown’s statement read. “No employer, especially a school with the resources and tradition of worker solidarity that Oberlin has, should arbitrarily lay off 108 workers and replace them with an outsourced staff. ”

College representatives declined to comment on Brown’s letter. Local Democratic congressional hopefuls also chimed in to voice their disappointment with the College and support of UAW workers and the students rallying behind them.

“Super proud that Team Shannon stands and fights with @oberlincollege to protect @uaw workers as the school tries to Union bust!” candidate Shannon Freshour tweeted Thursday alongside a video of Oberlin students marching to the Hotel at Oberlin.

Prior to the march to the hotel, Villar expressed his gratitude for the support his union members have received from Oberlin community members, Brown, and others.

“I’m still very optimistic about this whole thing,” Villar said. “I feel that [with] the amount of pressure that’s been put on them, they’ve been, in a way, forced to hear us out and give us some opportunity, but we haven’t been given much time.”

According to Villar, the next formal meeting between UAW leadership and senior administrators will take place on Monday.