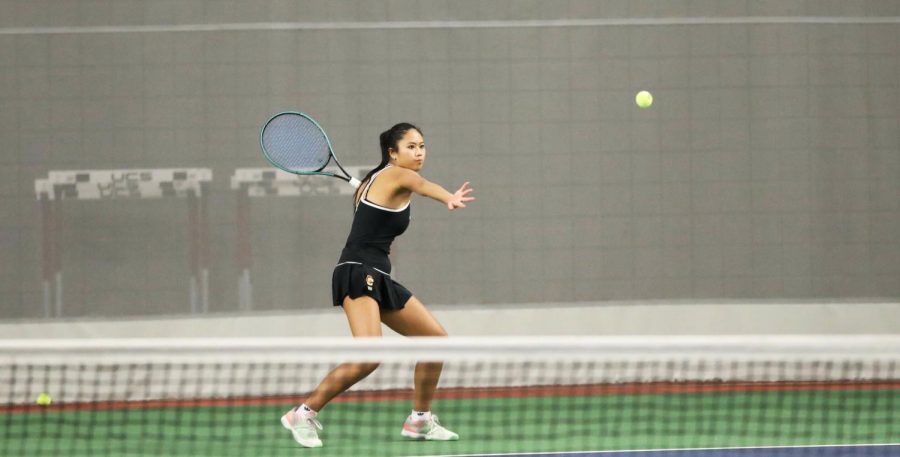 After an exhausting schedule with two consecutive double-headers, two away games last week, and three matches this past weekend, the Oberlin women’s tennis team is now 5–5. Despite a tiring past couple of weeks, the team still continues to bring its A-game. After a slow start to its previous season before rallying to finish fourth in the North Coast Athletic Conference, it’s been able to quickly pick up the pace and gain an immense amount of momentum for the rest of the 2020 season.

College second-year and member of the women’s tennis team Francesca Kern attributes the team’s success to its dedication and its confidence in their potential.

“We know that we have the ability to be the best in the conference, but we’re still aware of the fact that we need to work hard,” said Kern. “We want to be the best — and we know we can.”

The Yeowomen crushed their opponents this past Saturday 7–2 but lost the next day to Division-II school Indiana University of Pennsylvania, 7–0.

Despite this, the team has high hopes for the future. College first-year Dina Nouaime is looking forward to the rest of the season and the support of her teammates.

“I’m really enjoying the opportunity to play at the [number] one spot as a [first-year],” said Nouaime. “It’s definitely a challenge at times, but I have the support of my wonderful teammates to fall back on. We have such great chemistry and cohesion and I am looking forward to seeing what we accomplish as a team this season.”

In addition to this, College fourth-year and team captain Delaney Black has had a successful start to the year in doubles, going 8–2. As a captain for the second year in a row, she has been able to lead by example and inspire all the members of the team. She finished her season last year with many accolades, including making All-NCAC Second-Team in Singles, All-NCAC Second-Team in doubles with Francesca Kern, and a rank of 25th in the ITA Central Region.

Black had only positive things to say in regard to her doubles career for the new season.

“I’m really excited about how Isabelle [Olaes] and I are doing in doubles,” said Black. “We have great chemistry on [the] court, and our styles complement each other. I think the best part is we constantly teach each other something new about the game. She’s just getting her feet wet with doubles strategy, and I get to show her the ropes while adjusting my skills to a lefty’s style. It’s doubles at its finest, and I couldn’t ask for a better way to end my tennis career.”

Isabelle Olaes, who is currently 8–10 in doubles, is a first-year from Oberlin, Ohio. Her older sister, College third-year Claudia Olaes, is also on the team. Isabelle has not only had Black to help guide her collegiate tennis career, but a family member as well.

“Playing first doubles with Delaney has been great,” said the younger Olaes sister. “It’s also a lot of fun. We work well together. She is such a talented and smart player. We know each other’s game and lift each other up. The lefty-righty combination is pretty sick too. It throws a lot of our opponents off.”

In addition, she feels she has an immense amount of support from her team in general.

“I also want to compliment my other teammates: my sister Claudia, Dina, Alandria, Fran, Maja, and Hannah,” said Olaes. “[They] are awesome. We support and believe in each other.”

The team spends a lot of time watching film of their past games, assessing themselves to see what they can work on, and focusing on their own individual performance rather than that of their opponent.

The team unanimously agreed that tennis is one of the most mentally-intensive sports. Lack of focus will definitely cost a match, and getting caught up on mistakes unduly hinders performance. The team has focused on improving its goal-oriented mentality and eliminating result-orientated thinking.

With this mindset, the vision for the team is clear: qualify for the NCAC and win.

“[The team is] really looking forward to the NCAC tournament,” said Olaes. “If we continue to work hard and if the stars line up right, I think we have a great shot to come out on top.”

Coach Constantine Ananiadis is in his 13th season as the head coach of the program and has the same aspirations and high hopes for this season.

“Our team has a lot of potential this year,” said Ananiadis. “We have a young and talented group who works hard and gets along. We’ve had some mixed results so far this year though, unfortunately, due to some illnesses in the earlier part of the season. But, we seem to have the [worst] behind us now and we look forward to this small break we have now to recuperate and recharge the batteries!”

The Yeowomen have a bye this week, but they will return to their home court on Saturday, March 14 at 10 a.m. against John Carroll University.