Off the Cuff with David Kris, Security & Surveillance Expert 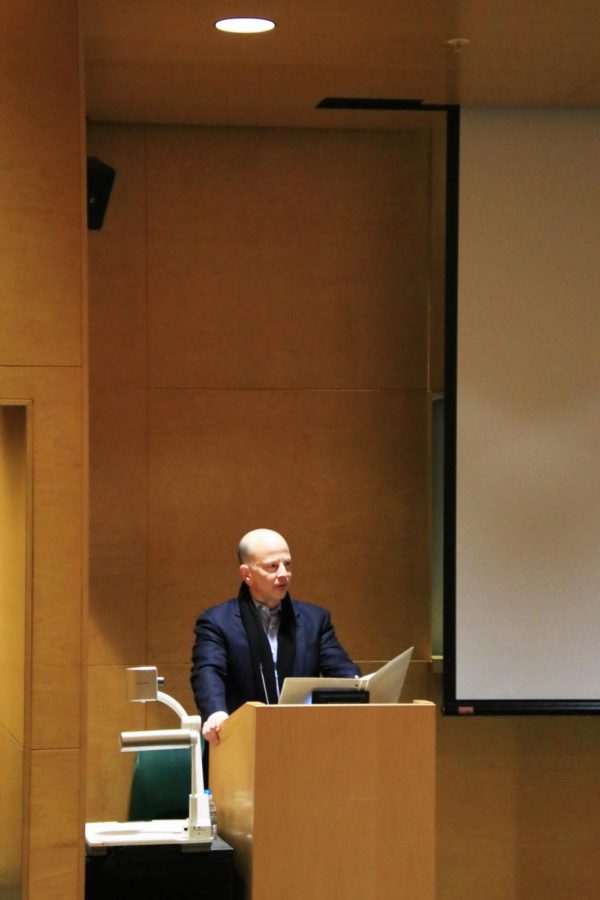 David Kris held a session titled “Surveillance and Hate” in Hallock Auditorium this past Tuesday. Kris is the founder of Culper Partners, LLC. He was the Head of the Department of Justice’s National Security Division under the Obama administration. He has also served as senior advisor to the Attorney General and Deputy Attorney General, and he worked as a federal prosecutor for eight years. Since 2011, he has worked as the general counsel of Intellectual Ventures and later became the deputy general counsel and chief compliance officer of Time Warner, Inc. Kris is a co-author of a leading manual in the field of U.S. foreign intelligence and surveillance, titled National Security Investigations and Prosecutions.

Could you talk a little about your firm and the kind of work that you do there?

So, it’s called Culper Partners. And many people don’t know the derivation of that, but George Washington’s first spy ring was The Culper Ring. I think that’s a shortened form of Culpeper, Virginia, which is where certain members of that spy ring were located.

I want to be clear, we do not offer espionage-related services. You can see on our website what we do [offer]. But, basically, we provide strategic business advice, not even legal advice — I’ve sort of stopped practicing law day-to-day — mainly to companies, either in the technology sector or that are somehow involved with or dependent on technology. That might be a media company for example, and others who are interested in issues around technology and government regulation and the like. So, for example, encryption and similar kinds of issues these days are very much in fashion, and we advise on those sorts of things.

It’s quite fun and it gives me a way of staying engaged in public policy issues that I am interested in and care about. And because it’s a consulting firm and I’m one of the two founders, I can sort of run it the way my partner and I want to run a business, which is nice. I’ve enjoyed that very much.

It’s a tall order. There’s no shortage of difficult threats and issues. I mean, one of the things I’m planning to talk about tomorrow is the rise of hate crime and domestic terrorism. When I got into this business, it was before 9/11, and I had done a lot of work on domestic terrorists and white supremacists and the like. I spent many years prosecuting a group of individuals known as the Montana Freemen — a delightful bunch. And then, after 9/11, the emphasis shifted to international terrorism. What we’re seeing now, and what I will talk a little bit about tomorrow, is that we have come to a point of parity between domestic and international terrorism.

Just recently, Chris Wray, the current FBI director, stated that [the FBI is] now treating domestic terrorism on equal footing with international terrorism; Islamic State and Al Qaeda and the like. And, indeed, recently, if you look at the deaths and the other problems caused by terrorists, the domestic terrorists are ahead of their international brothers and sisters within the United States. And it’s pretty clear that the trendlines are requiring much greater focus on domestic terrorism — in particular, white supremacist terrorism and related hate crimes. But I do think domestic terrorism is definitely one of the biggest challenges. Your intelligence community has now shifted its focus from a relentless counterterrorism emphasis to what they call a “2 + 3 model,” which is Russia and China — the two — and then Iran, North Korea, and violent extremists of all kinds.

Do you think surveillance adversely impacts people of color or lower income communities worse than others?

I think, broadly speaking, there’s no question that law enforcement generally has such an impact. I don’t know the answer [to] whether targets of surveillance have disproportionately been people of color. Historically, surveillance policies [in this country] have clearly been used to oppress non-powerful groups. And that’s not just true of surveillance, that’s true of intelligence, behavior, and abuse generally. Unless you’ve studied it, I would predict that no matter how suspicious you are about the government, it’s much worse than you would imagine. And things they did include, by way of example only, testing LSD on prisoners who were offered the drug of their addiction. Say you were a heroin addict and you were in prison for a heroin-related offense, and you would be given heroin by the CIA if you were willing to participate in an LSD experiment. They politicized intelligence collection against, you know, the so-called women’s liberation movement.

I actually, in preparing for this talk, did a little extra research and I was very interested to learn that the FBI was concerned about two young men at Oberlin in 1968 who were engaged in a hunger strike to protest the war in Vietnam. And the Bureau wrote fake letters to these kids’ parents saying, “Oh, do you know, your boy is involved in left-wing activities that could be very dangerous to his health.” And often abuse ends up directed against vulnerable groups. It is just the way it goes. Not always. I mean, to tell you the CIA not only did testing of LSD on prisoners, but they were in a joint research project with [United States Army Medical Research Institute of Infectious Diseases] and they literally spiked the drinks of their army colleagues without telling them.

So the answer to your question is yes, clearly law enforcement practices, including but not limited to surveillance, have over time been directed against vulnerable groups. But at times they’ve also turned on themselves.

You said that the things we could imagine the government doing, they’re actually doing worse. So what advice would you give students in trying to protect themselves?

Not today necessarily, but back in the day. So just to be precise on that because, God forbid, I conveyed a message [and] not the one I intend: I am in no way suggesting that all has been well since 1976. I mean we have evidence of improper conduct of various sorts. But, before 1976, in the 30 years after the 1947 National Security Act, it’s really bad in a way that is in scale, and scope, and in cultural approach to the legality of it. And they would write these internal memos to themselves saying, “Oh yeah, we know this is completely illegal, and we’re going to just do it anyway. You know, if we get caught, we better find a scapegoat that we can blame and pretend it was somebody else.” Again, not to say everything’s been perfect since then on the legal front, or on the behavior front for the intelligence community. You should be suspicious of your government.

But you know, the message that I am going to try to leave the students tomorrow, and I don’t know if this will be successful or not, is despite all of that — despite the history of abuse, the potential for abuse, the reality of abuse — as they embark on a career of studying and working in surveillance, that they be open to the possibility of government as not just an oppressor of vulnerable groups, but as a protector of those groups. A good deal of my career was spent, as I mentioned, prosecuting white supremacists, which I think of as a protective act. And indeed, one of the things I plan to say to these students tomorrow is that I’m looking forward to the day in which I might come back and we get to focus on our differences, which would mean that the foundations have been restored, and the common ground that rule of law matters is established. But today, right now we’re really focused on [preserving] the basic integrity of a democracy under law. But I would like them to be open to the idea, at least the possibility, that the government can protect minority groups and oppressed groups instead of just oppressing them further. How you balanced the two possibilities — oppression and protection — well. It’s the one piece of actual advocacy tomorrow as opposed to just pedagogy that I have in mind. So it’ll probably fail utterly and totally.