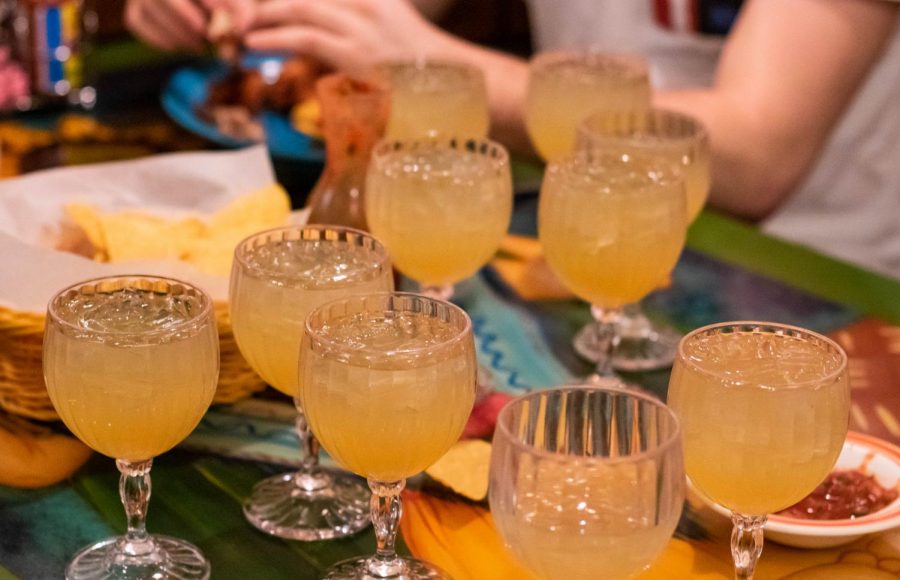 Margaritas on the rocks at Lupitas Mexican Restaurant during their Marg Night special.

Editor’s Note: All students quoted in this article are of legal drinking age.

Do you prefer your margaritas frozen or on the rocks? Is your favorite flavor the original lime, or an option like peach, watermelon, or mango? These are the questions I asked the crowded tables at Lupitas Mexican Restaurant, a downtown Oberlin joint known for its lacquered booth murals, reasonably priced enchilada platters, and, most of all, Marg Night. A staple among College students, Marg Nights are every Tuesday and Thursday until 10 p.m., and Lupitas customers can buy an original margarita for $1 or flavored for $2. For this article, I added another question to the list: do you prefer Catrina’s Marg Night, or Lupitas?

Starting just a few weeks ago, Catrina’s Tacos y Margaritas, a Mexican restaurant on West College Street, has advertised its own version of $1 Margarita Night, offered not just Tuesdays and Thursdays, but every night. This was not designed to duel with Lupitas Marg Night, especially given that both restaurants have the same owner. Catrina’s Marg Night, which started this semester, is still finding its footing, getting the word out, and trying to attract customers, given that its location is closer to campus. Catrinas offers a less crowded option than Lupitas, which is usually packed on Tuesdays and Thursdays.

“Usually you can’t get a seat,” College fourth-year Elia Lara said about Lupitas Marg Night. “It’s part of the experience. I think my favorite Marg Nights are the ones where I know somebody at almost every booth, and part of it is that you stay in your booth but you also run around and go say hi, and people merge. I had a table [that] changed three different times — the [group of] people [that was] there kept growing and changing.”

These warm memories are reminiscent of Dascomb’s Fourth Meal, where late-night bands of friends mingled with adjacent booths and flash-fried food. Lupitas Marg Night squeezes more people even tighter into the 15 available tables and four bar seats. Sometimes, ten people sit in booths made for half that number, with stragglers sitting on the windowsill or on pulled-up chairs. Logistically, this can get difficult as conversations get buried in the mass of friends and tables run out of extra chairs. Catrina’s is a quieter, more personable space with high ceilings, long tables, and a couple of booths of its own, but this quietness could mean running into fewer friends.

“I guess people go to Marg Night to have a time and meet people, but I go because I just want to have a drink and sit, which is why I don’t go to Marg Night at Lupitas,” College fourth-year Jacey Davidson, explained in her decision to go to Catrina’s. “Lupitas is very socially intense.”

At both Marg Nights, guests paid attention to the smallest details, such as the plastic cups Lupitas uses to serve their margaritas, compared to the nicer glassware Catrina’s offered. Sometimes at Lupitas, guests get a plastic goblet instead of a tumbler. Everyone I talked to agreed: they want a little plastic goblet, as a treat.

Catrina’s is still learning the ropes; this past Tuesday was the busiest Marg Night ever, and they went through four glass types, finally serving margs inside clay pots. Catrina’s and Lupitas have other differing details as well. Lupitas has better chips, Catrina’s has better salsa; Lupitas plays better tunes; Lupitas has classic murals and paintings, while Catrina’s has nailed the Dia de los Muertos aesthetic.

As for marg options: Most Lupitas and Catrina’s guests went for original lime margs on the rocks, the $1 classic, for the taste, easy alcohol calculus, and ability to “crush it” without getting a brain freeze. At Lupitas, I tried a mango-flavored marg on the rocks which made the usually watery, slightly sour drink three times as sweet with a kick of mango at the end. At Catrina’s, guests basked in the sweetness and hidden alcohol content of the lime margs, comparing them to yellow Gatorade or a melted popsicle.

“If you were to give me this [marg] at a soccer game … I’d say, ‘Thank you for this great rehydrating beverage with electrolytes.’” College third-year Nikki Lewitt said, reflecting on the near-imperceptible alcohol content.

While it’s difficult to replace the tradition of Lupitas Marg Night, there’s no harm in adding another restaurant to the party, especially one as intimate and fun as Catrina’s. Given how Lupitas Marg Night often fills 15 tables with more than 4 people each, future Marg Nights might fall under the category of “large-scale public and co-curricular events that attract more than 50 people” that Oberlin College may advise students to skip. In that case, Catrina’s could be a great second choice to drink away your woes.