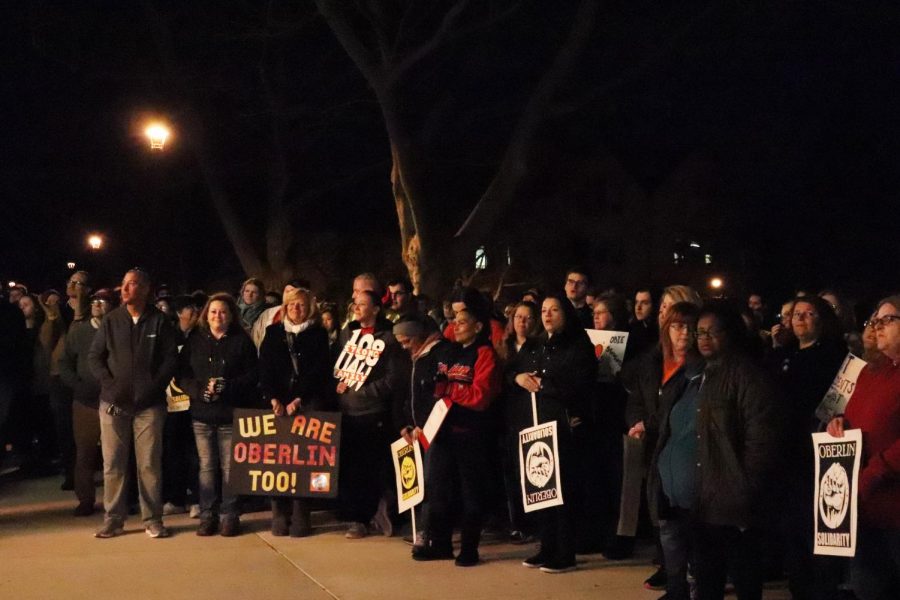 Student activists met with members of the Board of Trustees last week to denounce the College’s announcement that they are considering outsourcing up to 108 United Auto Worker jobs. In the meeting, students expressed their concerns and presented petitions that had been signed by students, alumni, and the broader Oberlin community.

Elsa Schlensker, College fourth-year and chair of the Student Labor Action Coalition, was one of the students who presented.

“The overall message that students hoped to impress upon the Board of Trustees was that this issue of outsourcing isn’t and can never be just about the numbers,” Schlensker wrote in an email to the Review. “This is an issue about what our institution values and what we’re going to commit to as we approach our 200th anniversary.”

Chair of the Board of Trustees Chris Canavan said that while pro-UAW activism has inspired conversation, trustees maintain their view that considering outsourcing these positions is the right decision.

Schlensker feels disappointed that student efforts did not change the course of the trustees’ decision making.

“We were saddened to hear that, despite our commitment to dialogue and working through issues that affected our community, the board appeared to suggest that they would not consider appealing the decision made by College administration,” Schlensker wrote.

Canavan explained that he has been encouraged by the tenor of the conversations that the College has been able to hold with the Oberlin community.

“Our discussions are about how difficult these kinds of changes are, and how proud we are to be a part of the Oberlin community because we’re capable of making difficult decisions and of having differences of opinion without making assumptions about intent and ascribing all sorts of malice,” Canavan said.

President Carmen Twillie Ambar maintains that considering outsourcing the UAW jobs is the right decision for the College. She spoke about colleges that have had to take serious measures due to financial concerns, and she restated her commitment to ensuring that Oberlin does not end up in a similar position.

“I’m under no illusion how painful and difficult this is for our community — it’s painful for me to have to think about these things,” President Ambar said. “But the truth of the matter is this will never get any easier than it is today, despite how difficult this is. And to have to come and say to this community, five years from now, three years from now, and say ‘We have to cut 30 percent of our budget, and we have to cut it by August?’ … This feels radical now — I know that. But that will feel like we are eliminating who we are. And that’s the complication.”

President Ambar stated that the decision to consider outsourcing was a difficult choice to make.

“You don’t come to considering this lightly,” President Ambar said. “You don’t come to this possibility without … caring about what this might mean for someone who might not have their position. … If you asked me what is the thing that I think about the most, it’s really that. … And so part of this work is to try to find a way through it if we can, and even if we can’t, to try to find a way for us to provide as much support as we possibly can — even if we ultimately end up in a space where those positions are outsourced.”

As the majority of students have been instructed to leave campus this Monday in response to growing concerns over the novel coronavirus, COVID-19, any continuing UAW conversations between College administrators and departing members of the Oberlin community will have to occur remotely.