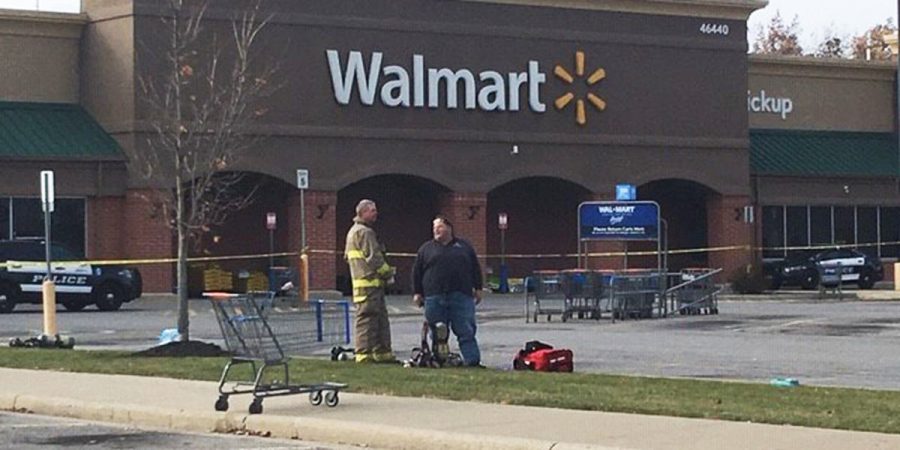 First responders stand outside of Walmart in October following the hospitalization of six people.

Testing done by the Lorain County Crime Lab determined last month that the substance that caused seven people to experience overdose-like symptoms in October was crystal methamphetamine, and not fentanyl, as previously suspected. The ramifications of this result still echo through the community of police officers, emergency medical technicians, and Mercy Allen Hospital nurses who were affected.

The original incident — which occured on Oct. 29, 2019 — involved a call about a suspicious individual in the Walmart parking lot. Police arrived, and after one of the officers made contact with the individual, the officer began to feel ill and eventually used the emergency overdose treatment Naloxone on herself. The individual in question also became ill and an ambulance was called. One of the EMTs assisting in the ambulance started exhibiting some symptoms, and once the patients were admitted to the hospital, several nurses and healthcare workers also became sick.

“There were seven people that were exhibiting symptoms and six [of them] received treatment — including the initial suspect and the police officer,” President of Mercy Health Allen Hospital Charlotte Wray told the Review late last year (“Unknown Substance Causes Emergency at Walmart, Mercy ER,” Nov. 1, 2019). “I’m not at liberty to get into the specifics of the clinical situation, but the people exposed to the substance may be feeling extremely weak, dizzy, or confused. They may lose consciousness and stop breathing. It is very serious.”

Following the incident, Oberlin Police Department Chief Ryan Warfield suspected that the synthetic opioid fentanyl was involved. Accounts of emergency responders becoming ill after exposure from fentanyl — a drug that can be up to 100 times more potent than morphine, according to the Centers for Disease Control and Prevention — have been prevalent on local news channels across the country since at least 2016. Ultimately, only methamphetamine, not fentanyl, was found at the scene.

Many in the scientific community believe there is little evidence that shows that these experiences across the country are a result of contact with any drug.

“Methamphetamine is not absorbed well through the skin and you would need a lot of it in order to inhale it and get sick,” said Diane P. Calello, MD, executive and medical director of the New Jersey Poison Information and Education System and associate professor of emergency medicine at Rutgers Medical School. “So coming upon a person who has been drug intoxicated — even if it’s in a closed space like a car — is not likely to sicken a first responder or law enforcement.”

An article published by the Journal of Medical Toxicology on Jan. 20 reviewed over 200 news stories from the past five years about emergency responders becoming ill because of accidental exposure to drugs. After examining the reports, the researchers found zero of the reports included symptoms or route of exposure that was consistent with drug toxicity.

“At the end of the day, people who use fentanyl, heroin, meth — they’re not just rubbing it on their skin, they’re injecting it, snorting it, doing other things, just because this isn’t possible,” said Ryan Marino, MD, who works as an emergency physician and medical toxicologist at University Hospitals Geauga Medical Center.

Still, according to Calello, the experiences of emergency responders in Oberlin and across the country are not pretend or made up.

“A lot of times what contributes to these symptoms is what I call a physiological response to feared exposure.” Calello said. “I’m not saying it’s a panic attack. I’m saying if you found yourself in a situation that you believed to be an imminent threat to your life — some people have a very strong, actual bodily response to that. The heart races, you feel nauseous, that makes you dizzy and then you pass out — you get legitimately sick, but it’s not a response to the drug. It’s a response to feeling like you’ve just been exposed to something that’s going to kill you.”

This response is not limited only to fear of fentanyl exposure and has been referred to in medical literature as the ‘nocebo effect.’ Medical experts agree that this effect can incite measurable bodily changes.

“You can think of it like … kind of the negative side of placebo effect,” said Marino. “So if you think of placebo as like treating something using nothing at all, nocebo is causing symptoms with nothing at all.”

Warfield and others at the Oberlin Police Department are still skeptical of this possibility.

“They were at the hospital, they were actually throwing up, they actually felt faint.” Warfield said. “I know how powerful the mind is, but your mind has to be pretty strong to convince you of those symptoms.”

Thomas D. Stuber, President and CEO of the non-profit organization The LCADA Way which specializes in alcohol, drug and gambling addiction treatment, said that it’s possible that there was a substance involved that was not tested for, or came back with a false negative.

“I anticipate that the first responders have been adequately educated and — certainly in our county — dealt with enough situations that you’re not going to have, I guess you’d call it a psychosomatic response; I think that in fact that if they have a response, I would take it as real,” Stuber said.

According to Calello, though, even individuals with high levels of training might experience a physiological response — through no fault of their own.

“There’s been so much concern by the law enforcement and first responder community that they can be poisoned if they come into contact with a drug scene,” Calello said.

And while small amounts of exposure to fentanyl or methamphetamine might not be dangerous, the idea that they could be certainly is. Reactions to feared exposure can be genuinely terrifying or even traumatic. Because of this education and stopping the spread of misinformation is extremely important.

“The people that are reporting it have a responsibility not just to report something that’s sensational, but to report something that’s factual and speak to an educated person about what would be causing those symptoms and could those symptoms be related,” said Cincinnati Drug and Poison Information Center Operator Dave Harper. “That would help to debunk a lot of these fictitious reports.”

Still, police officers across the country have received official training stating otherwise, and the federal Drug Enforcement Administration released warnings to police officers in 2016 stating that fentanyl exposure was dangerous to police even in very small doses.

To medical experts like Marino and others, this type of misinformation within the emergency responder community is concerning because it could harm patients and people suffering an overdose.

“The people who do have a real overdose from fentanyl, heroin, carfentanil, whatever, we don’t want to delay showing up to the scene because we’re worried that they’re contagious or that there’s something in the air or around them that will affect the people there,” said Marino.

For people who are worried about coming into contact with dangerous drugs, Marino recomends carrying Naloxone. This treatment is shown to be effective against drug overdoses and can work as a placebo, counteracting the nocebo effect.

According to Calello and Marino, counteracting the misinformation about drug exposure through education and ballenced reporting could help keep overdose victims and first responders alike safer going forward.