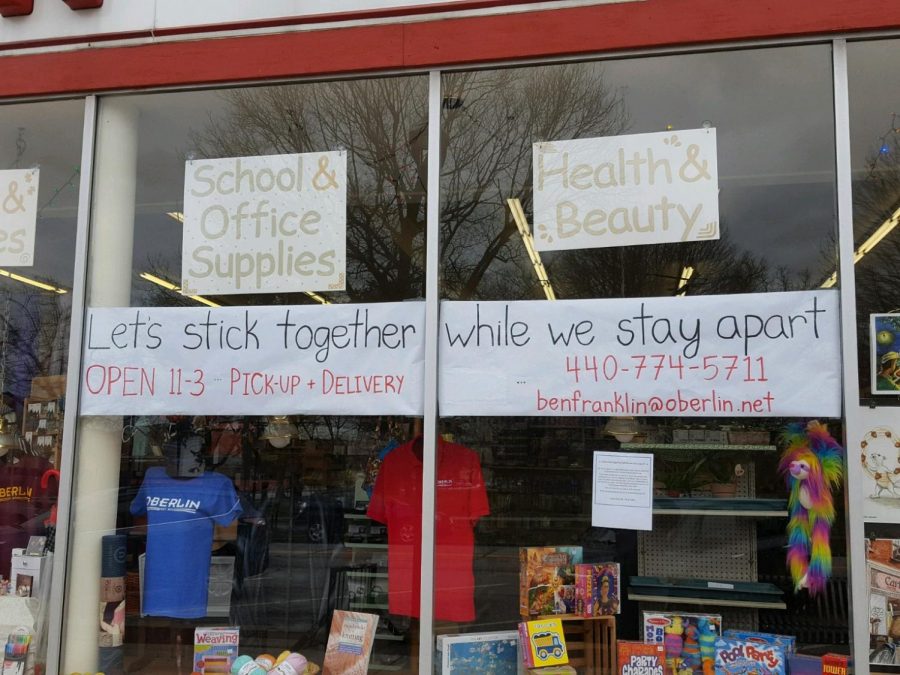 Ben Franklin & Mindfair Books’ window displays a banner to inform customers of their reduced hours and new delivery options in response to COVID-19. “My message is, ‘Let's stick together while we stay apart,’” said Ben Franklin’s owner Krista Long. “I think everyone, all the business owners in Oberlin, … have that also at their heart.”

Oberlin business owners are worried that they will need to lay off workers after Ohio Governor Mike DeWine’s Sunday announcement that the Ohio Department of Health is issuing a “stay-at-home” order for all of Ohio. The order is meant to reduce the spread of COVID-19, which — as of Monday afternoon — had hospitalized 104 people in Ohio, with 442 confirmed cases in the state overall.

Even before the formal order, local businesses in Oberlin were battling the financial impact of the pandemic. Customer bases began shrinking as the College sent a majority of students home and residents began adhering to social distancing practices recommended by the Centers for Disease Control and Prevention and other public health officials.

Restaurants across the state were ordered to close in-person dining services a week ago, on March 15, with carry-out and delivery services still permitted. With DeWine’s Sunday announcement, all non-essential businesses are ordered to close on tonight at 11:59 p.m. until at least April 6; local law enforcement can be expected to enforce this order.

“I think everywhere people are stressed,” said Krista Long, owner of Ben Franklin & MindFair Books. “As a small business owner, I mean, it could end up crippling us. I go forward optimistically in whatever I do. But yeah, when I wake up at three in the morning, it’s like, ‘Wow, I could lose it all.’”

According to the order, essential businesses that are still allowed to operate include health care services, grocery stores, stores that sell medicine, daycare centers, media organizations, and gas stations, among others.

Janet Haar, executive director of the Oberlin Business Partnership, worries about the businesses that will have to shut down because they are considered “nonessential.”

“The engine of this country is on the backs of small businesses, and this hurts them worse than it hurts anybody else,” Haar said. “These small businesses live day by day and week by week too — most of them. They give people jobs; they support people even during this kind of time when they have to lay them off. I know the government is trying to do something about it, but, you know, when [a business] has to lay off people this week and the government does something about it two weeks later — it’s just a little scary.”

Before the state’s order, businesses owners around Oberlin struggled to balance public safety with the needs of their businesses and employees. Jessa Klotz New, OC ’01, owner of Slow Train Cafe and The Local Coffee & Tea, made the decision to temporarily close The Local last week after sales were down 80 percent once students left campus. Klotz New wondered if closing Slow Train as well would be better for the public good.

“I have this sort of internal struggle about what the right thing to do is,” Klotz New said just before DeWine’s announcement. “You know, people want me to stay open, and other people don’t understand why — in their eyes — I’m prioritizing coffee sales over people’s safety. I haven’t gotten a lot of sleep in the last week and a half or so. It’s been really, really hard just trying to make all of these decisions when things are changing constantly.”

In the week before the order, Klotz New and her team had devised other ways to minimize risk of infection, including stopping cash transactions to minimize contact. However, this change meant that the staff could no longer accept tips from customers, an issue that Klotz New took into account.

“My husband and I decided that to make up for that, we were going to add in tips for our staff manually from the sales so that they’re not losing out any more than they already have to,” Klotz New said. “As long as we can afford to do that, we’ll do that.”

Many local businesses are increasingly having to consider whether they need to lay off employees. At Ben Franklin, some of Long’s employees have already started to apply for unemployment.

“We definitely have had that conversation,” Long said. “Am I going to be able to afford to keep people on if business is really reduced? I don’t know. That’s a big, huge question mark. But that’s why I just said [to my employees], ‘You better go ahead and file.’ By the time the paperwork comes back to me, I’ll have a little clearer idea of what I’m needing in terms of staffing going forward.”

Because Ben Franklin sells food and medicine, the store will continue to operate during the stay-at-home order, but at reduced hours from 11 a.m. to 3 p.m., which the store adopted last week. The store is implementing new tactics to keep customers and workers safe, including deliveries and curbside pickup, allowing customers to make orders over phone or email.

The number of unemployment claims nationwide skyrocketed last week, with The New York Times reporting that the unprecedented jump was larger than any week-to-week change during the 2008 financial crisis. In Ohio, claims increased more than ten times those from the week before, from 7,051 claims filed during the week of March 14 and 78,000 claims filed in just the following three days, from March 15-17.

Enough people across the country are applying for unemployment that many have reported it is actually crashing government websites, according to CBS News. In hopes of protecting the stock market, President Donald Trump asked state governments last week to delay releasing data on unemployment claims until the Department of Labor distributes official numbers this Thursday.

With more people being laid off from a variety of jobs around Oberlin, Executive Director of Oberlin Community Services Margie L. Flood expects to see an increased need for its food pantry and other services. OCS has also implemented a drive-up pantry to limit contact between people.

“We are working with Second Harvest, doing everything we can to ensure people have access to food,” Flood said. “Right now, that means we are distributing bags of food in our parking lot, putting them directly in people’s trunks. As long as this model works, we will continue. At some point, I think we will reach the point that it is more efficient and easier on everyone to go to distributing right off the truck.”

In addition to running the food pantry, OCS helps people in Southern Lorain County cover the cost of utilities, rent, and prescriptions. Even with the loss of many volunteers — many of whom are college students sent home because of the pandemic — Flood encourages anyone in need to reach out to OCS.

“We have a stellar core crew who are doing amazing work,” Flood said. “I’m so grateful for their passion, their hard work, and their commitment to serving the people who need serving right now. Whether you’ve ever needed help before or not, we’re here. We’re here to help, and we will do everything we can to make that happen. That’s what’s most important.”

Should OCS need it, City Council is preparing to supplement OCS’ funds for utilities and rent assistance, according to City Council President Linda Slocum. For now, though, City Council cannot implement this plan because it legally cannot conduct a vote over video conference or by phone. Council votes must occur during an in-person meeting where constituents can be present, something that is no longer possible while social distancing.

“We’re waiting for some decisions perhaps from the state legislature that would temporarily suspend the requirement for public presence at our meetings,” Slocum said. “These protections are in our laws so that the public has access to what’s happening.”

Once Council is able to vote again, Slocum and other councilmembers hope to support Oberlin residents in other ways, including increasing internet access among Oberlin children whose classes are now online because of the disease. Council is currently working with Oberlin City Schools to find strategies to realize this plan.

DeWine’s stay-at-home order is going to be reevaluated on April 6, but depending on infection rates, the ban still might not be lifted at that time. For people across Ohio and nationwide, uncertainty persists in many aspects of their lives.

“I don’t know, it seems selfish to be like, ‘Okay, if you could just tell me that in a month we’ll be able to actually talk to one another again and communicate with people in person and do all of these things that we took for granted a month ago,’ then I think it would be a little easier for everyone to plan,” Klotz New said. “But I don’t know. I don’t know when the next time I’m going to actually have a profitable day will be, and that is very, very scary because I can’t imagine losing these businesses.”

The U.S. Small Business Association has made low-interest loans available to small businesses in Ohio through the Economic Injury Disaster Loan program. For Klotz New and other small business owners, though, the idea of taking out loans — even low-interest ones — is not ideal.

Still, Klotz New, Haar, and others highlighted the hopefulness they felt in their community’s ability to support each other — even in times of crisis.

“I’ve called and talked to pretty much every business in town just to find out how they’re doing,” said Haar. “I was really surprised at how positive people were. … Even the people I talked to that had made the really hard decision to close, at least to close temporarily, … people were saying, ‘Hey, we’re all in this together, so we’re going to do what we can do.’”