“What are you watching, Obies?” Survey Results: Fill up on a YouTube Cooking Show 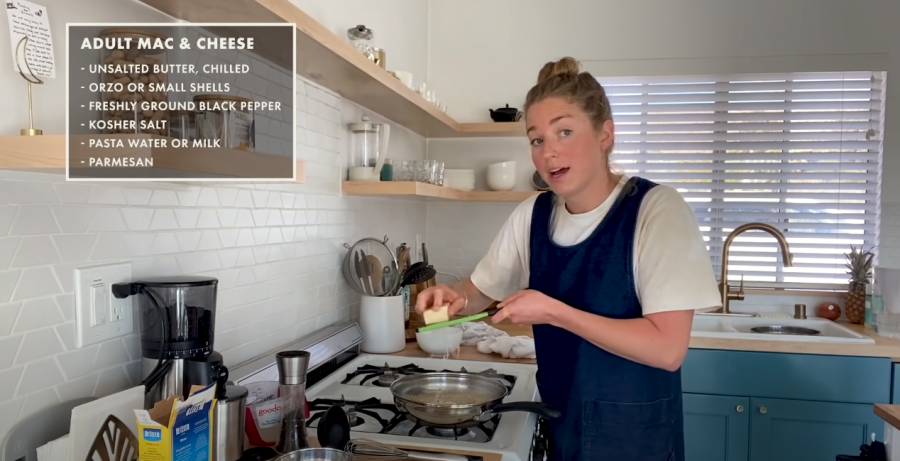 Editor’s note: This is the third article in the Review’s ongoing series responding to the “What are you watching, Obies?” survey created by Mellon Postdoctoral Fellow and Visiting Assistant Professor of Cinema Studies Leah Vonderheide.

Last week I made a gorgeous fried egg, salted and peppered it liberally, placed it gingerly over some rice, and had a mini photoshoot before devouring the fruits of my labor. Spending so much time at home over this past month has recentered these sorts of tiny victories. When we cook or bake, we get to transform something, harnessing the laws of physics and chemistry toward delicious ends — it’s practically magic.

Between Saturday, March 28 and Friday, April 3, Leah Vonderheide conducted an online survey of 230 Oberlin student’s quarantined viewing habits. In her initial response to its results, she pointed out that Netflix appears — unsurprisingly — to be students’ favorite platform.

A plurality of student respondents, though, ranked Bon Appétit’s YouTube videos as among the most “comforting” and “inspiring” of their socially-distanced viewing choices. One brave soul said Bon Appétit was a top show to make them laugh out loud. YouTube, for what it’s worth, requires no subscription. Even an unreliable internet connection can accommodate a short video or two. Dare I say, it could be one of our only true equalizers.

Bon Appétit is a beloved, and possibly even genre-transcending, corner of the site. The channel features real people, professionally filmed and edited. Chefs try out recipes for home cooks in an industrial test kitchen. Each video captures a lively and chaotic cooking experience brought to you by, in most cases, culinary school graduates. It’s reality but not reality TV, delivering instructional content alongside the subplots, inside jokes, and hilarious one-liners of a beloved sitcom.

Bon Appétit features classic recipe videos, sure, but also recurring segments like “Gourmet Makes,” “One of Everything,” “Reverse Engineering,” “Test Kitchen Talks,” and “It’s Alive.” “Back-to-Back Chef,” where Carla Lalli Music guides celebrities from all corners of the entertainment world through a recipe with only verbal instructions, is my personal favorite. Lalli Music has the gentle energy of a Cool Mom, and there’s something satisfying about watching famous people who don’t know how to crack an egg create an enticing meal under her guidance. Perhaps most importantly, the BA team also features some former Obies: Chris Morocco, OC ’03, and Amiel Stanek, OC ’10.

Because of a YouTube channel’s unique production cycle, Bon Appétit is one of few entertainment outlets that has been able to respond to COVID-19 in real time. Viewers watch their favorite editors tour their home kitchens, brew their favorite morning coffees, and cook pantry pasta with parents, kids, and friends walking in and out of the frame. It all feels achingly relatable. As we use food to comfort ourselves, the BA team members are doing the same from their own kitchens, utilizing the sometimes short supplies of their own cabinets while coordinating with their coworkers over sometimes tenuous Zoom connections. Bon Appétit has been able to uniquely react to, and support its viewers through, an unprecedented social moment.

Emulating cooking videos needn’t be fussy nor expensive, nor do you need fun evening plans to occasion trying a new recipe. Quite the opposite! You can choose a project that doesn’t necessitate a trip to the grocery store, too. One of my favorite things about Bon Appétit videos is the plethora of simple tips for cooking delicious food that viewers can pick up along the way. These tricks don’t require extravagant ingredients but make even the simplest dish that much better: add more salt than you think, always reserve pasta water, and chop with your knuckles closest to the knife blade rather than your fingertips.

To simply watch can also be a pleasure — no participation required. The consistent, simple shots of food are hypnotic and reassuring: cheese melting, meat searing, fat emulsifying into a sauce. Cookies rising in the oven and deflating on a cooling rack. Your favorite BA personalities suffering through a tricky sourdough starter or grinning after tasting the first, perfect bite.

The way Bon Appétit approaches it, cooking is low-stakes and high-reward. Cooking is for everyone. All you need to be a part of the magic is a YouTube connection. Maybe you can watch from the kitchen or dorm room where you’ve had every meal this past month. What Bon Appétit sparks in the imagination — and the stomach — makes your familiar home new again. You might close your laptop comforted, inspired, or still laughing.