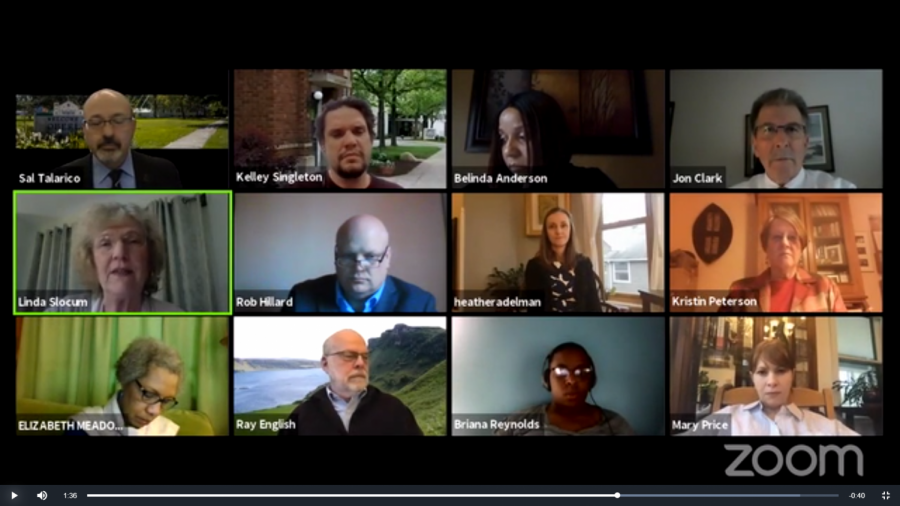 In response to the impacts of COVID-19, City Council recently committed funding to several programs that provide financial relief and resources to Oberlin community members. City Council expanded existing programs and established new initiatives that offer assistance to residents, business owners, students, and seniors. Many of these efforts were addressed following an interim period when City Council was unable to meet.

On March 16, City Council’s regular meeting was canceled after the city closed public access to municipal buildings in consultation with Lorain County Public Health. Because the City Council’s charter states that meetings must be open to the public, they were unable to video conference at that time. In their special meeting on April 1, City Council passed a resolution to implement the provisions of House Bill 197 which allow them to conduct their meetings over Zoom as an emergency measure.

City Council’s efforts to support community members include the expansion of the Caring Fund, which is dedicated to helping qualifying residents pay their utility bills.

“What we said was if [the fund] runs dry, if it runs out of money, we’ll put in an extra $25,000 to make sure that no one is turned away,” City Council President Linda Slocum said. “The guidelines for being able to avail yourself of that are more flexible now maybe then they had been.”

Oberlin Community Services will continue to approve residents for Caring Fund assistance, as they have done previously. The city has also partnered with Oberlin City Schools and the Oberlin Cable Co-op to provide students with the internet access they need to complete their work remotely.

“We are offering — through qualifying households — connection to a Wi-Fi capability for three months,” Slocum said. “It’s a lot of families, anybody who qualifies for free lunch and people who’ve been laid off can apply even now.”

According to the Oberlin City Schools website, the district identified 250 parents who did not have access to the requisite technology. The city committed to withdrawing up to $26,000 from the Sustainable Reserve Fund for this program. The SRF was first established to support the implementation of the Climate Action Plan. City Manager Rob Hillard believes that this use of the fund is consistent with the plan’s mission to increase community “education and outreach” and “resilience.”

“We talk about resiliency as a part of our plan, and obviously we’re firsthand understanding the vulnerabilities of all of us,” Hillard said. “Secondly, the education and awareness component — as we know, to communicate with folks, we do it through a number of vehicles including mailings, including utility bills, and the use of the internet and electronic messaging is key. So we think this actually is consistent with that. I do not believe that will impact our overall goal to reduce carbon in the time frames we’ve established.”

In their April 1 meeting, City Council also decided to provide the Neighborhood Alliance with $60,000 to support their work with senior citizens.

“The senior citizen center has closed right now, seniors are at home, so they’re looking in on the seniors — checking in on them,” Slocum said. “They also do this home meal-delivery to seniors. So it’s a very important service, and we want to keep supporting that during this pandemic.”

City Council has also developed new initiatives to support local businesses. In their April 6 regular meeting, councilmembers passed an ordinance to establish a Capital Loan Program to support for-profit businesses that employ low- to moderate-income workers. The program offers interest-free loans of up to $10,000. Payments can be deferred for six months, and the loan can be paid off over five years. Oberlin is supporting this program with the $106,000 the city received from the Community Development Block Grant.

“The federal government’s doing stuff like that, the state’s doing stuff like that,” Councilmember Kelly Singleton said. “But there’s also stuff that we can do on a local level, and hopefully we can help our local businesses survive not having a commencement. There are so many businesses in Oberlin that barely survive summer when the students and everybody leave. This summer, we’re not going to have any of the camps. It’s just going to be like the slowest summer of all time — and it started a month ago. Hopefully this money can help these companies.”

In addition to this fund, Hillard tasked city workers with helping business owners who are interested in utilizing state or federal financial aid programs.

“The programs can be confusing if you’re not used to dealing with the government and government programs,” Hillard said. “What I’m trying to do is assure that we have a local resource, so if there’s questions, they can be asked directly to folks at City Hall. I have assigned the Planning & Development Department to be that resource.”

Formal approval for many of these projects was temporarily delayed after City Council’s regular meeting on March 16 was canceled. Slocum explained that, before HB 197, they were unable to hold City Council meetings at all.

“The main holdup was that our rules say that the public has to be present,” Slocum said. “[HB 197] provides temporary authority for a public body to conduct these meetings by electronic means — so long as those meetings may be heard and observed by members of the public.”

Meeting agendas and video recordings continue to be updated on the city’s website, as they were before the transition to Zoom meetings. Slocum stated that City Council is still looking into ways for the public to participate.

“We are working on a protocol to allow public participation in future meetings,” Slocum said at the beginning of the April 1 special meeting.

Since City Council implemented HB 197, the other boards and commissions that were also unable to meet during this interim period are now able to resume work over Zoom.

For city employees who cannot complete their work remotely, the city has implemented smaller teams and shifts to make it easier for employees to practice social distancing on the job. This applies to many public works employees, including Oberlin Municipal Light and Power System workers. City Council passed an ordinance during the April 1 meeting that approved Hillard to enter into a memorandum agreement with the International Brotherhood of Electrical Workers, Local 39 in order to establish a rotation for OMLPS employees.

As a result of the city’s transition to rotational and remote work, recycling operations have also been temporarily suspended.

While the city has been able to pass several new initiatives to support the community, Hillard also believes that this means other local government efforts will experience setbacks.

“I believe that this moment and the moments ahead are going to disrupt what I think is a really exciting plan for our city in the five strategic areas,” Hillard said. The city’s five strategic areas for development include city services, environmental sustainability, social equity, community development, and neighborhood outreach. “I see those plans being adjusted more on a time frame issue versus not doing them, because those five strategies are core to our community and core to the City Council’s objectives.”

Hillard spoke about his strategies for keeping residents informed in the midst of the disruptions that the COVID-19 pandemic has caused — including placing posters at IGA, Dollar General, and other locations that may see foot traffic during the statewide stay-at-home order.

“One of our five point strategies is providing city services in an excellent way,” Hillard said. “We rely heavily on emails and phone calls, it’s just a part of our service. But that can be challenging, especially for those who don’t have access — or [don’t] easily have access — to this type of technology. So we’re trying to communicate, look for ways to do better. We have some areas in town where we’re trying to create stagnant messages so that folks know to call us at a minimum because the data and the information is changing so quickly that it’s hard to come up with a concrete message that’s not potentially changing.”

Hillard encouraged all Oberlin residents with internet access to monitor the Lorain County Public Health and Oberlin City Council websites for updates as the city continues to respond to the spread of COVID-19.