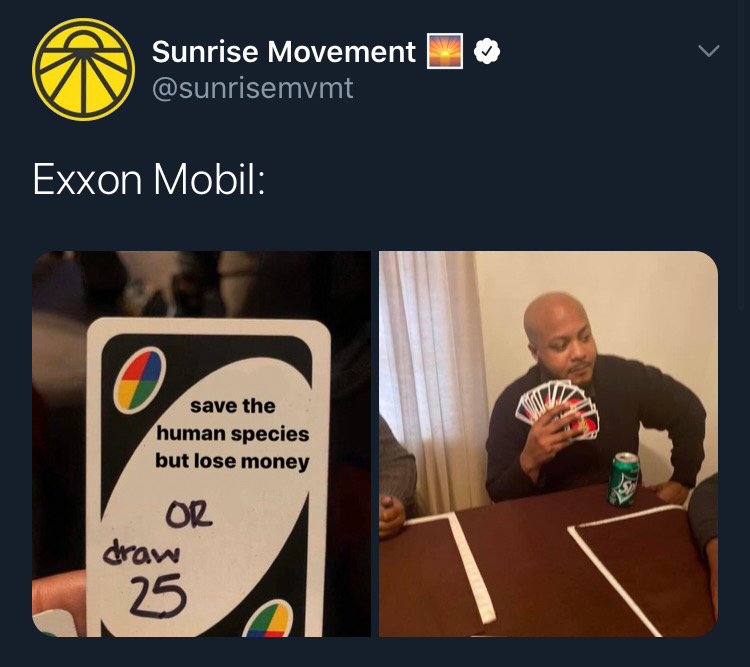 A meme posted on the Sunrise Movement’s official Twitter page. Social media has become an important venue for environmental activism.

Today’s young people largely share two things in common: pervasive use of social media and a collective anxiety about climate change. It’s no surprise, then, that Twitter, TikTok, and other social media platforms have become epicenters of climate-related content.

For College second-year Grace Smith, creating memes is a part-time job. Smith is the social media coordinator for Sunrise Movement, a youth-led climate advocacy group with hubs across the country, including a chapter in Oberlin. Smith’s work with Sunrise’s national social media team focuses on “social humor, rapid response, and data analytics.” One TikTok shared on the Sunrise Movement Twitter on Feb. 27 shows Smith in an Oberlin sweatshirt, staring at her phone, shocked and annoyed while the lights flicker and change colors. Above her head are text bubbles: “Can I come over?” the U.S. military texts her. Smith replies, “noo my hair is oily :(” and the U.S. military texts back, “On my way! #NoWarForOil” is featured in the text above.

While entertaining, such posts may come across as largely ineffective in the face of issues as large as American imperialism. However, Smith explained that social media can bring people into the cause; Sunrise, for its part, has built an impressive and growing movement of youth activists across the nation.

“I started doing analytics reports, and whenever we had a surge of followers, it was because a meme went viral,” said Smith.

“I think that when things do go viral, it gets more national attention and gets the attention of more established publications, which in turn … gets more attention from politicians, which is really the main goal of all of it,” said Serna-Brown.

However, raising awareness alone isn’t enough. Online climate activists face a number of obstacles that prevent productive engagement with their content on social media. Instead of fostering real activism among users, social media sometimes enables passive supporters of a cause to mindlessly scroll through content on their feed.

For one, activist accounts may be preaching to the choir. Siloing is a social media phenomenon in which an algorithm shows users content that is similar to what they’ve liked before. Allison Chaney, a researcher at Princeton University, found that these algorithms effectively sort users into “bubbles” of ideological consensus. In an interview with The Conversation last year, Chaney explained that “as people within a bubble behave more similarly, the bubbles start to shrink,” further insulating users from unfamiliar ideas and information. This means that social media posts intended to educate users about climate issues or encourage action are most likely to be seen by people who are already educated and active, rather than reaching new people.

Even if important information does reach a new audience, there’s no guarantee that people will read it.

“I found out that people do not like to read an article quote,” Smith said. “I was shocked — they would rather like and share articles that are briefly summarized in, like, two sentences. … And I looked at the share times — no one was reading [the articles]. They would just read the summary and be like, ‘Oh yeah, that’s important to share.’”

It’s also entirely possible that, rather than inspiring social media users to take action, climate-related content can lead to defeatism and apathy. This is particularly true of memes, which is Smith’s specialty.

“One of my posts that did the best … was a meme that was very nihilistic,” Smith said. “I’m always [asking myself], ‘Does this do a better job of spreading a consciousness? … Or is it contributing, not even consciously, but subconsciously to this idea of there is nothing we can do?’”

Negative climate messaging can make people feel like giving up on environmentalism. In College fourth-year James Cato’s Psychology Honors project, he asked people to think about either an apocalyptic future, a sustainable future, or the present-day. Then he asked participants to write a paragraph about their neighborhood.

“We found that … those in the apocalyptic writing condition made fewer actual pro-environmental choices in a task,” Cato explained. “This relationship was marginally statistically explained by their level of anxiety.” In other words, pessimism and anxiety don’t lead to positive action — they cause people to hunker down and give up.

However, Cato’s research suggests that positive photos of nature can make viewers appreciate the environment — even if it’s just scrolling past a photo of a cute bird from the Audubon Society or a landscape image on National Geographic.

Social media also allows activists to control their own narratives. College fourth-year and Students for Energy Justice member Rachael Hood explained that tools like Facebook Live are important because they allow activists to produce video evidence of what’s happening at rallies without any editing from mainstream media.

“You can use social media to put a direct narrative into the world,” said Hood. “You’re not trying to publish it in a newspaper or get it on the radio. You can say exactly what you mean. I think that that’s really important because a lot of mainstream outlets aren’t going to run something that’s really confrontational and … talking about things a lot of people don’t want to talk about.”

For example, Hood explained, mainstream media misconstrued the Dakota Access Pipeline protests at Standing Rock. When some news outlets alleged that the protests were violent, the protesters were able to use Facebook Live to show that police had instigated the violence. Hood is currently working on a senior thesis focused on pipeline resistance activities.

Sunrise uses social media to defend its vision of a Green New Deal, which would otherwise be defined by Fox News anchors and other media figures who are skeptical of the proposal. They also attempt to use social media to inspire mass engagement and protest. Smith pointed to one Instagram post in which Sunrise members across the country are shown holding the same yellow and black signs. Activists in New York, D.C., Philadelphia, Maryland, and Colorado are all united with the same vision.

“I understand that this is a ridiculous job to have, but I kind of do feel a little good about myself sometimes when I do go over those numbers and I’m like, ‘Wow, this got 350 people to sign up for this call,’” Smith said. “It makes me feel like it’s not like a useless endeavor.”