In Favor of the Green New Deal 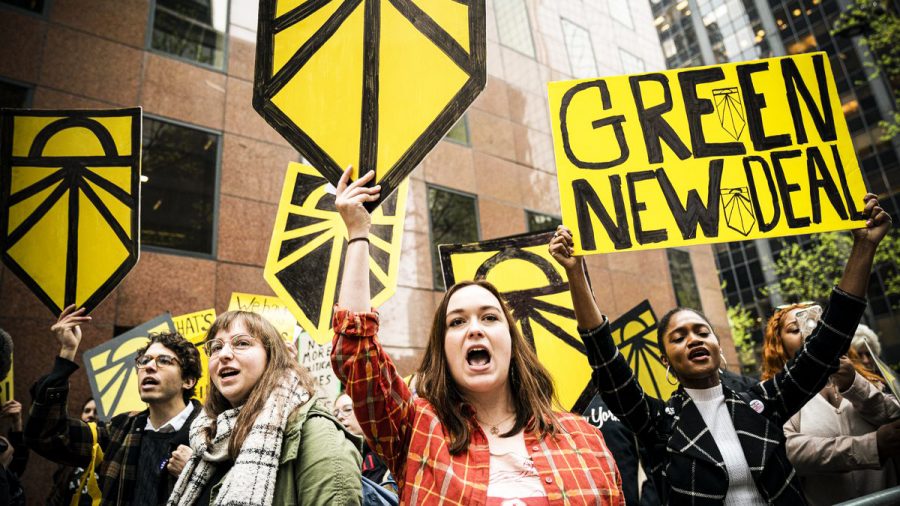 By now, it is clear that the world has until 2030 to limit the catastrophic effects of climate change by keeping global average temperatures from rising 1.5 degrees Celsius above pre-industrial levels. In order to meet this goal, global carbon emissions will need to drop 45 percent from 2010 levels over the next 10 years.

At our current rate, the world will not even meet the Paris Climate Agreement target of limiting global warming to 2 degrees Celsius above pre-industrial temperature levels by then, and the United States — due to years of inadequate climate action further enabled by the Trump administration’s regressive policies — has fallen behind. Without sweeping and immediate economic changes, we are on a collision course for widespread environmental disaster.

The Green New Deal currently exists as a resolution introduced into Congress by Representative Alexandria Ocasio-Cortez (D–NY) and Senator Edward Markey (D–MA). This resolution has several goals: net-zero greenhouse gas emissions; job creation and protection of labor; green infrastructure; health as a human right; and environmental justice. These goals will be accomplished through passing smaller bills like the Green New Deal for Public Housing Act — which would commit up to $180 billion to retrofit, upgrade, and decarbonize the nation’s current public housing — introduced by Senator Bernie Sanders (D–VT).

Some may argue that encouraging change in individuals’ behavior or a market-based approach — such as a carbon tax — will better address climate change. But these approaches are unreliable and will not create the transformative change we need to actually address the problems in our political and economic systems — unbridled fossil fuel extraction and emissions; the market’s disregard for humans and the environment in pursuit of profit; and the disconnect between environmentally harmful actions and the people those actions affect.

While individual actions and behavioral changes — such as using reusable straws or eating fewer animal products — are helpful and well-intentioned, we must not fall into the trap of placing the burden of combating climate change on the individual. Since 1988, just 100 corporations are responsible for 71 percent of global emissions. There must be a comprehensive, systemic change to our economy and society. This type of change cannot happen without a mass mobilization to transfer our economy to 100 percent renewable energy, build accessible and affordable public transportation, upgrade and retrofit buildings, et cetera. The Green New Deal can use federal funding, investment, oversight, and regulations to achieve what encouraging individual behavior change or market-based incentives cannot.

We cannot rely on the inconstant and uncaring market to stop facilitating the extraction and burning of fossil fuels, as it has for decades, and choose to magically address climate change instead. We cannot pretend that corporations and their CEOs will suddenly bestow their “benevolence” on us when they continue to profit off of our current system of rampant inequality and exponential production.

The burdens and impacts of climate change are felt disproportionately by low-income communities, Indigenous populations, and communities of color. The Green New Deal resolution specifically recognizes this unequal burden and will address it by prioritizing investment in marginalized communities; ensuring that local stakeholders have key roles and power in decision-making; engaging in restorative justice and cleanup efforts to redress recent and historical cases of environmental racism; respecting the autonomy and sovereignty of Indigenous peoples, especially in decision-making on local projects; and strengthening social welfare programs.

I will not pretend that the proposal is flawless, but it is by far the best policy option we have, and it is the only policy option that addresses climate change at the scope and scale of the crisis. We need a Green New Deal now.