The Oberlin Review • May 4, 2020 • https://oberlinreview.org/21015/opinions/50th-anniversary-of-kent-state-shootings-demonstrate-how-obies-step-up-in-crisis/ 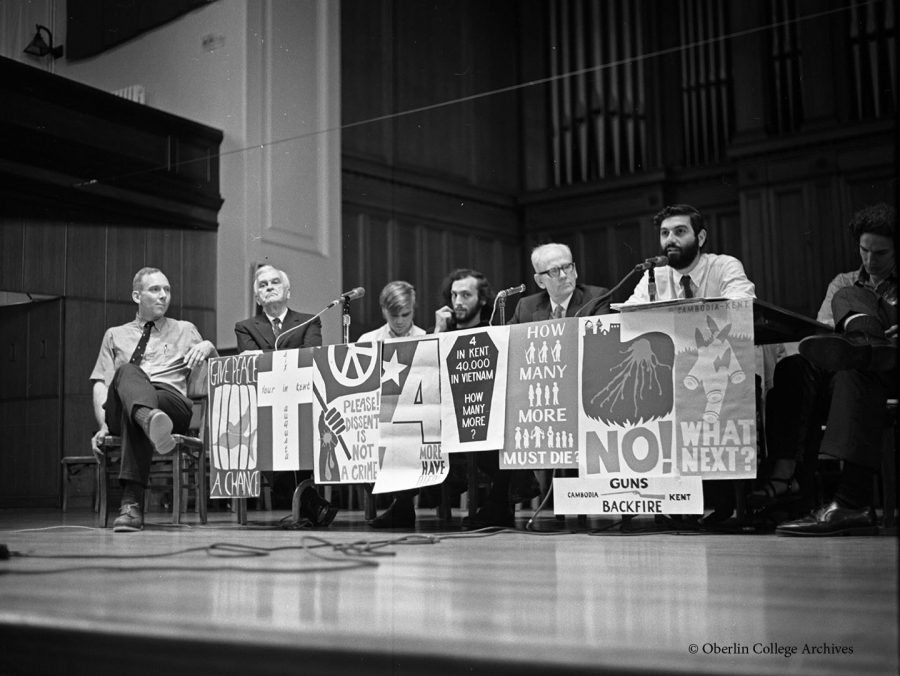 Photo from The Oberlin Sanctuary project

Students and Faculty hold a symposium in Finney Chapel titled "Oberlin Reacts to Kent and Cambodia" on May 27, 1970. This year marks the 50th anniversary of the events at Kent State University.

Today marks the 50th anniversary of the violent confrontation between antiwar college students and the Ohio National Guard at Kent State University in 1970, which left four dead and nine injured. The iconic photographs that emerged in the immediate aftermath of this event — as well as the infamous Crosby, Stills, Nash & Young protest song “Ohio” — immortalized the conflict and its role in heightening national conversation not only about that spring’s invasion of Cambodia, but also the Vietnam War in general.

Few know, however, of how Oberlin responded to the events at Kent State. The two weeks that followed — two weeks that were supposed to be marked by sunny weather and raucous celebration — highlighted the extent to which Obies come together in times of crisis.

Members of the Oberlin campus and community were shocked to learn of the clash at Kent State, which is located just over an hour’s drive from Oberlin. Tappan Square became the site of an impromptu vigil on May 4. According to Review reporting, hundreds of students organized that evening and endorsed a motion to strike until the end of the semester or until the demands of the National Student Association were met (“Finney Crowd Votes College Shutdown,” The Oberlin Review, May 5, 1970). Among the demands was the immediate cessation of military activity in Vietnam.

That night, acting Dean of Students Thomas F. Bechtel announced in a crowded Finney Chapel that the following day would serve as a day of mourning for the dead. The next day, General Faculty met in King Building and essentially canceled the rest of the semester, declaring that all students could decide to receive their grades as they were as of May 4, or alternatively, choose Credit/Co Credit entry. While classes and athletics continued in a stunted state, it was clear that the Oberlin community would shift its focus toward responding to this moment of political and social upheaval.

In this period of suspended normalcy, Obies did what Obies still do — they kept busy, organizing and planning strategies for collective action. On the night of May 5, Oberlin students met with representatives from other Ohio universities, including Kent State, and formed the Ohio College and University Coalition. At this meeting, coalition members designated Oberlin as “Kent in exile;” over the next two weeks, Oberlin hosted approximately 200 students and 25 faculty members from Kent State and became a hub for nationwide information dissemination about the conflict.

Over the days that followed, it was clear that the events at hand would require sustained community unity and alignment of campus-community values. On May 6, 200 campus and community members gathered in Finney Chapel to discuss strategies for improving town-and-gown relationships to better foster collective action and organize shared use of resources. Although well-intentioned, these efforts illuminated tensions between the town and College that had already existed but were brought to a head in attempting to bring the two parties together.

Within a week of the meeting, two officers from the Oberlin Police Department were temporarily suspended after a May 8 incident yielded accusations of a pattern of racial discrimination within the OPD.  Student-led protests contesting the officers’ actions resulted in damaged downtown storefronts, complicating an already delicate relationship between College students and local residents.

This was clearly a moment of departure from the normal pomp and circumstance of institutional hierarchy. Stewart I. Edelstein, OC ’70, wrote in an August 1970 article for the Oberlin Alumni Magazine that “throughout the two-week period the College community operated in a democratic manner.” Students and faculty found themselves sitting side-by-side on various ad hoc committees; a “Liberation School” was organized to facilitate an open exchange of ideas across all members of the Oberlin community; and a group of 12 local residents, including City Council members and College students, flew to Washington, D.C. on May 7 to meet with Ohio congresspeople.

While there was much to be done on campus and in town, still more students took to the state and national stage. Students left Oberlin en masse to attend rallies in Columbus and D.C., joining thousands of other college students and activists in protesting against the U.S. invasion of Cambodia and the Vietnam War.

Although the events at Kent State and the activism that followed deserve stand-alone historical reverence, the reverberations of this moment in Oberlin history are sharpened by the ongoing COVID-19 pandemic. Both the Classes of 1970 and 2020 saw their final semesters irrecoverably cut short by events that would shape the course of their lives forever. While the Class of 1970’s graduation was not canceled, unlike the Class of 2020 — graduating students voted to still hold graduation, albeit without donning caps and gowns — these two classes are bound together by similar experiences of profound communal upheaval.

Perhaps it is only in moments of great turmoil that we can achieve greater levels of understanding and historical empathy. We remember the names Jeffrey Miller, Allison Krause, William Schroeder, and Sandra Scheuer 50 years later. And as the end of this unforgettable semester winds down, we remember the two weeks that Oberlin students forwent normal end-of-year celebrations and collectively organized to forge a better, brighter society.