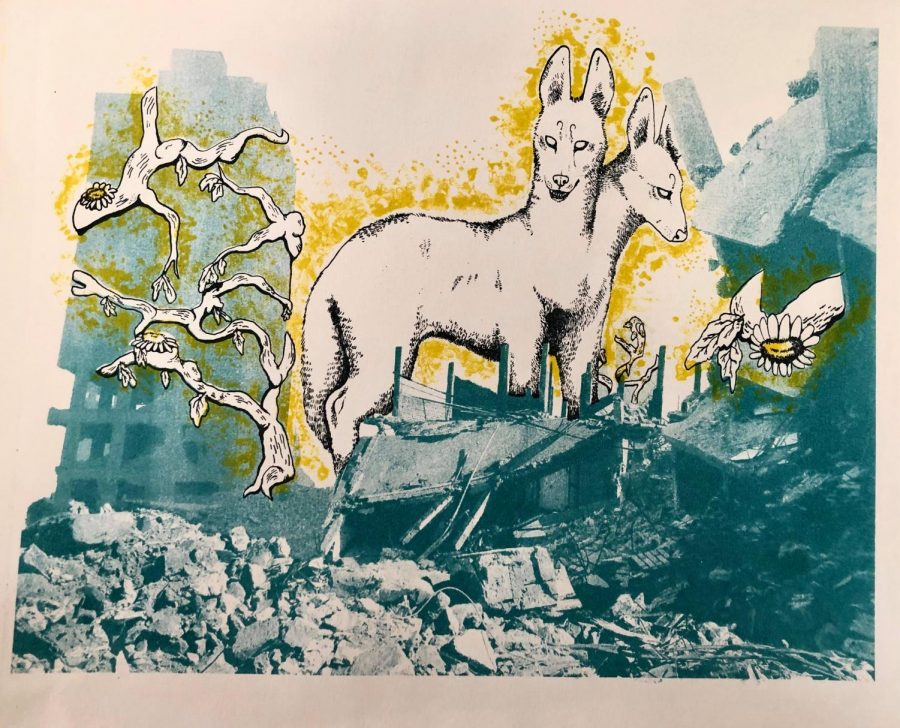 Art by College fourth-year Sam Battle. “I really like to make art about nature, especially using topics from biology that a lot of people aren't super familiar with as metaphors,” Battle said. “I like being able to educate people about the crazy things their bodies can do, as well as connecting that to emotion and feeling.”

Art is always created in context — a truth made all the more apparent by the events of the past few months. Student artists at Oberlin, separated from campus resources, have had to adapt their creative practices for the semester, using this time to process the pandemic through art or to take a creative break from the world.

Second-year Sociology and Studio Art double major Jacob Valero used his creative practices to help him adjust at the beginning of the pandemic.

“Back when this all started, being able to focus on a piece for a couple of hours every day really helped me,” Valero said.

In these times, he has prioritized work that brings him joy and art that he is passionate about.

“I really enjoy fish, so I draw a lot of fish,” Valero said. “A lot of my art has pretty bright colors and bold outlines. I just like things to be fun and I want it to be fun for me. … I also draw human figures quite a bit. I’ve been working on this project recently for a class, and I am quite proud of it. It’s about trans masculinity and basically what I’m doing is taking older imagery from antiquity and repurposing it to fit contemporary trans narratives.”

Some students have had to shift their art-making practices. The media that students can access has been greatly impacted by the closure of school facilities; the printmaking studio and fabrication lab are no longer available to continue projects. While remote learning has made some undertakings impossible, Oberlin students have worked to adapt to these changes and in some cases have even seen their subjects influenced.

Third-year and Studio Art major Mikaela Howard, who was focusing on printmaking this semester, no longer has access to the studio. In response to this limitation, they turned to another interest — animation — and began teaching themself how to make a stop-motion doll.

“I kind of had to invent a new thing that I wanted to do,” Howard said. “I looked through my little art supplies I have here and I told myself, ‘You know what, I can do this.’ It’s definitely challenging, but it was nice to have a good challenge to throw myself into while everything was happening.”

Following the transition to remote learning, fourth-year Biology major Sam Battle has been making art with cardboard. Battle, who lives on campus in Oberlin chose this material due to his restricted access to art supplies and in response to the temporary suspension of recycling services in Oberlin. Battle’s work shows how the medium in which art is created can be a response to context just as much as subject matter.

“I know that in Oberlin recycling isn’t happening right now as much because people would have to sort it,” Battle said. “So I’m trying to reuse and reduce rather than recycle since that’s not going on.”

While the current crisis and stay-at-home orders across the U.S. have given some artists more time to focus on their work, the pressure to be productive has weighed heavily on others.

All three artists concurred that the pressure to produce “good art” has not been beneficial to their practices. They have all found it more useful to focus on adapting and being kind to themselves while reckoning with the disruptions in their lives.

“If you’re not feeling up to [making art,] don’t do it — do it when you’re feeling up to it,” Valero said. “The inherent drive of an artist to create art, that’s never gonna go away. It might subside for a little bit, but if you really love art, eventually you’re going to pick up whatever medium you work with and do something when you have enough energy. I just don’t think we should force ourselves or force each other to do anything, especially during a pandemic.”

Student artists are doing what they can to express themselves and find solace.

“Art can be anything that makes you happy. … You can make things that are for yourself, and just for joy, even though it can be hard,” Battle said.