The Oberlin Review • May 9, 2020 • https://oberlinreview.org/21038/news/downtown-businesses-receive-financial-assistance-support/ 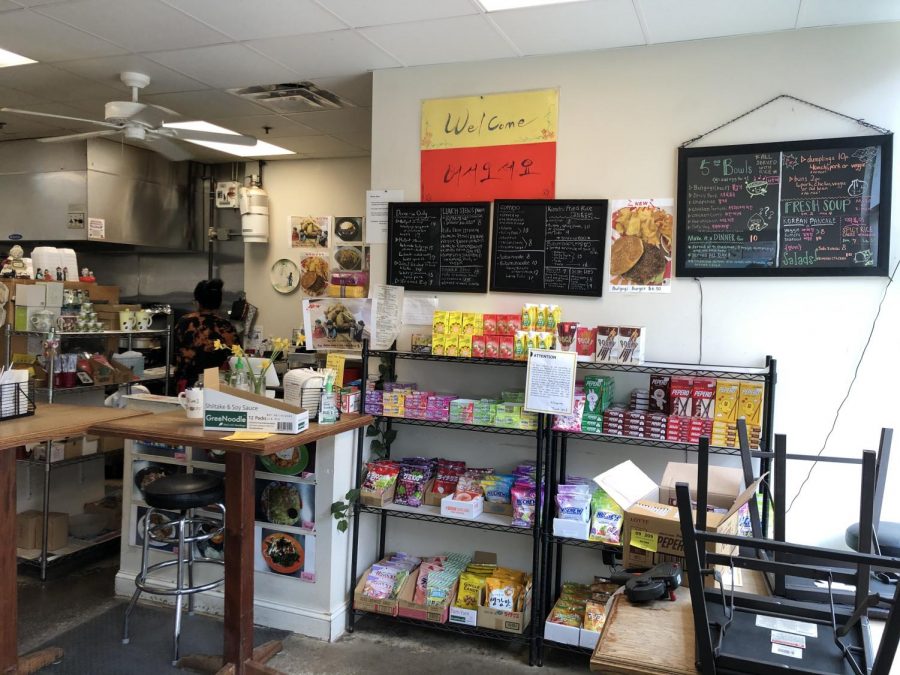 Kim’s Grocery & Carry-out has stayed open during the COVID pandemic.

Since Ohio announced its stay-at-home order on March 22, most of Oberlin’s small businesses have lost their steady sources of revenue. Many are currently unable to pay rent or compensate their employees. In an effort to temporarily cover expenses, some businesses have taken advantage of a new loan program instituted by the City of Oberlin, while others are looking to the federal Paycheck Protection Program.

“Our business dropped almost 90 percent. We used to get a hundred tables, almost 120 tables a day, and now all of a sudden, we’re lucky if we get a dozen,” said Michael Joseph, owner of Black River Cafe and Oberlin Kitchen. “I’m sure the fact is that there isn’t anyone that hasn’t been affected.”

Oberlin’s restaurants have mostly remained open for take-out only during the stay-at-home order. Carlyle Gift & Flower Shop and other businesses are offering some delivery services, and All Things Great has started selling items on Ebay while their brick-and-mortar store is closed. Ben Franklin and other businesses that sell groceries or medicine have remained open under certain constraints.

“We’re really glad we were able to be open,” said Krista Long, owner of Ben Franklin & Mindfair Books. “We’ve been limiting the hours in the day and it seems to have been working out reasonably well. While it’s certainly not sustainable in the long run, it’s done enough to cover our expenses, including payroll and utilities.”

On April 27, Ohio Governor Mike DeWine announced the Responsible Restart Ohio plan to gradually reopen the state’s economy. The plan allowed manufacturers, distributors, construction, and “general office environments” to reopen on May 4; businesses in the consumer, retail, and service sectors can reopen on May 12. Last Thursday, DeWine announced that bars and restaurants can resume outdoor service on May 15. On May 21, bars and restaurants will be permitted to open for dine-in service. Salons, barbers shops, and other personal care services will also be able to open on that day.

While many businesses will finally be able open their doors, they must observe stringent safety precautions. Capacity will be limited to 50 percent of the fire code. Employees must assess their symptoms daily, sanitize high-contact surfaces hourly, and wear face masks at all times. Restaurants, bars, and businesses offering personal care services will be required to maintain 6 feet of space between customers.

Jessa Klotz New, OC ’01, owner of Slow Train Cafe and The Local is concerned about what reopening businesses will mean for the health of the Oberlin community, even if it will stimulate sales at her cafes.

“[DeWine] has sort of started this slow restart to the economy, which is kind of scary,” she said. “We’re losing money every day at this point. … Even though I love my business and I want to do everything I can to save it, it’s not even close to anywhere near as important as the health and safety of the staff.”

With Slow Train Cafe’s 10th anniversary coming up, Klotz New says the dilemma of whether to restart business at the risk of her employees’ safety is especially upsetting.

“Our 10-year anniversary is May 15th,” she said. “We were going to have a nice big party, but obviously that’s not going to happen. Even though May 12 is the day we’re allowed to [open], I think May 15 is what we’re hoping for. We’re thinking of doing like curbside pick-up in the front where everything is prepaid ahead of time.”

According to Long, even when Oberlin’s economy is allowed to reopen, the damage has already been done. Many events downtown have already been canceled, and there is speculation that most students may not be back on campus for several more months.

“We have no conferences this summer, we have no summer theater,” Long said. “We also have a number of outdoor big events, like the Big Parade, which didn’t happen. The struggle now is to think about how to get through a very dry summer and then the possibility that students won’t be back in September.”

Long says she is working to find new ways to connect with customers and ensure her business survives the year.

“I’ve already been planning things, like finally keeping a point of sales system, finally moving toward a shopping cart website, things like that,” she said. “Of course, I can’t really afford to fast forward that, but I recognize how important moving those things forward is going to be for the long-term success of this store. My optimism lets me think that, okay, I have a plan for the future, I think I can break even in the present.”

Oberlin City Council passed its COVID-19 Emergency Working Capital Loan Program on March 30. The program provides five-year loans of up to $10,000 to businesses in Oberlin for rent, inventory, and payroll expenses, as well as other immediate needs. The loans are zero-interest and carry no additional fees. According to the program’s guidelines, each loan must support the retention of at least one full-time job.

Black River Cafe and Oberlin Kitchen have received loans from this program. Joseph said he is currently working 12-hour days and is unable to pay his employees. He believes the loans will help temporarily keep his businesses afloat.

“It’s going to help us hopefully restock some inventory and catch up on some of the payroll, which is not the whole problem, but [the loan] resolves part of the problem,” Joseph said. “[The loan application] wasn’t complicated; they announced what they needed ahead of time and you get it together.”

Other businesses in Oberlin, including Slow Train Cafe, have sought assistance from the federal government via the Paycheck Protection Program, a low-interest loan program that opened on April 3 targeting businesses with 500 or fewer employees. The PPP ran out of its original $349 billion in funding on April 16. Eight days later, the U.S. Senate agreed to provide an additional $310 billion, expanding the program to a total of $660 billion.

The U.S. Small Business Administration has also authorized its Economic Injury Disaster Loan program to distribute advances of up to $10,000 that do not need to be repaid.

Klotz New says sales have dropped 80 percent between her two cafes, which collectively employ 40 employees. Her application for a PPP loan was accepted.

“I applied for the Payroll Protection Program loan the first day that it opened and then I was able to secure that loan, which is why I’m able to bring all my staff back, which is great,” she said. “It only lasts for eight weeks, so hopefully that’s enough of a sort of guinea pig experiment time to see what works and gauge where we’ll be at the end of that period.”

However, Klotz New expressed her frustration with the application processes for both the PPP and the SBA loans.

“That PPP loan is a nightmare trying to wade through — the rules are so vague still and none of the banks can even answer questions,” she said. “I also applied for the [SBA] grant and got shut out of that. … It started at four o’clock and I signed on at 4:02 and [the site] had already just crashed.”

Long, who was also approved for a PPP loan, says government assistance to small businesses will need to help with more than just payroll.

“There’s been grants within [Lorain] county and the City of Oberlin,” she said. “[These loans are] gonna really impact things like being able to pay your vendors for merchandise that you already have in store. I think rolling toward payroll is good, but it’s not entirely what is needed. We need better support for rent — the landlords, they’re getting screwed out of rent if we can’t pay it.”

Kim’s Grocery & Carry-out is another popular Oberlin store that has remained open but is struggling to stay in business. Last weekend, a parent of an Oberlin student offered to donate $2,500 after College fourth-year and Kim’s employee Clarissa Heart shared on Instagram that Kim’s was worried about having to close down. The money was used to have a Kim’s Community Day, which Heart organized.

“Basically, the parent offered to sponsor or donate $2,500 to Kim’s,” Heart said. “And I was like, ‘Oh, that sounds like a great idea, but Ms. Kim I know doesn’t want to take donations.’ She’s more interested in people buying food and actually using the money to get something out of it.”

The parent suggested to Heart that instead of a typical donation, the money be used to pay for meals for students and community members on behalf of the class of 2020.

“A lot of students who are here, they’re not getting paid by the College anymore, they’re now having to pay rent or pay for their own groceries,” Heart explained. “So it was kind of done with the intention of both bringing business to Kim’s but also providing a little bit of relief, a free meal to people who might not be able to afford one every day.”

Heart says that in these stressful circumstances, small businesses in Oberlin are continually checking in on and supporting each other.

“A couple other restaurant owners came in today and they were just talking about how they’re struggling to pay their rent,” they said. “But [Ms. Kim] has been really pushing for and looking for ways to support everyone and she’s staying really optimistic. Even knowing that this might go on for a while.”