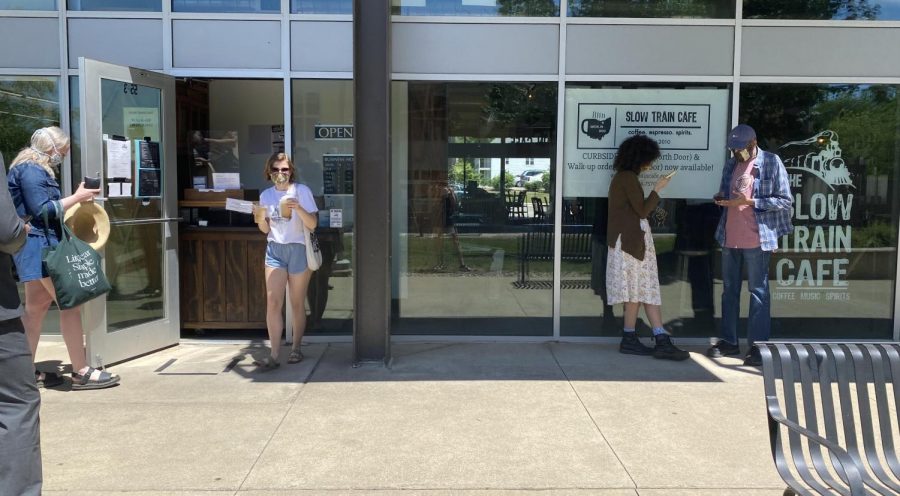 Slow Train customers place their orders at the cafe's rear entrance. Many of Oberlin's downtown businesses have changed the way they operate to allow for social distancing.

As part of his Responsible RestartOhio plan, Governor Mike DeWine reopened restaurants and bars for outdoor dining on May 15 and dine-in service on May 21. However, many of Oberlin’s businesses rely on student presence in town and depend on major events — including Commencement and summer camps — to make it through the summer. The loss of these events has been devastating for shops like Cowhaus Creamery, which announced that it will be closing its Oberlin store permanently in a Facebook post on Monday.

“Essentially, we (and the majority of businesses in Oberlin) “lost” our season when the college shut down,” Cowhaus Creamery’s Facebook announcement read. “Normal summers in Oberlin are slow — but this summer would be brutal. Even for an ice cream shop.”

Krista Long, the owner of Ben Franklin & MindFair Books, noted that as Oberlin’s businesses have opened, people seem more comfortable visiting stores in town rather than just stopping for curbside pickup. However, this change has not generated a steady flow of customers. According to Long, much of Oberlin’s usual customer base comes from the largely absent College students and from residents of Kendal at Oberlin, who are quarantined for the foreseeable future.

“I think, to be honest, that’s going to be an important part of building sales and staying in touch with the public in general,” Long said. “Especially to the extent that we’re trying to reach people outside of Oberlin … we’re going to need a strong social media presence.”

Similarly, the owner of Slow Train Cafe and The Local, Jessa Klotz New, OC ’01, has shifted much of Slow Train’s business to online platforms. While maintaining connections with her client base through social media, she has also successfully introduced online ordering to limit in-person contact.

“I think people are really enjoying the ordering online, and I think we might keep that, depending on how things go,” Klotz New commented. “I think it makes some people feel safer, too, that they don’t have to wait in line.”

Beyond these online adjustments, however, Klotz New is struggling to find new ways to boost revenue.

“At this point, I feel stretched creatively to where I can go,” she said.

Klotz New was approved for the federal Payroll Protection Program loan, aimed at helping small businesses keep their staff employed amid the weakened coronavirus economy. But limitations and changes to this plan have exacerbated Klotz New’s predicament. Initially, in order for the loan to be forgiven, the PPP required at least 75 percent of funds go to staff payroll and gave business owners only eight weeks to spend the funds.

Klotz New immediately applied for and received the loan, and was told at the time that she only had two months to use the money. As required by the program’s policy, Klotz New kept her staff on payroll and put the remaining money to use quickly, only to see President Trump sign the Paycheck Protection Program Flexibility Act on June 5. The PPPFA extended the loan period from eight weeks to 24 and lowered the payroll expenditure requirement to 60 percent, meaning that 40 percent of the funds could go to expenses like rent or electricity.

While these changes benefited many businesses — like those that have been unable to open, or that received PPP funding late in the original eight-week period — they represent a lost opportunity for Klotz New, who received the loan nearly two months ago and has correspondingly low funds.

“At this point, I can’t change my course,” she said. “It would’ve been nice to have that in place when I first got the loan because it would’ve helped me spread things out a little bit, but I wanted to be able to pay the employees that I could, and I wanted the money to go to them, and so I brought everybody back at once instead of gradually.”

Now, Klotz New says she plans to adjust staffing and hours so she can afford to keep Slow Train open until students return.

On Wednesday, the College announced its plan to have a portion of the student body back on campus in mid-August. The returning students will probably increase revenue for businesses, like Ben Franklin and Slow Train, that are still fighting to stay afloat through the summer. But COVID-19 will likely continue to impact how downtown Oberlin looks far past fall semester, as businesses such as Cowhaus Creamery make the tough decision to close their doors forever.

“Our absence in Oberlin fills all of us at the’ haus with sadness, but we are also overwhelmed with gratitude,” read Cowhaus’ Facebook post. “We’re proud to have been a place of warmth, friendship and community. We have come to know many of you as family. We are grateful for all of our loyal customers and amazing employees that have graced our little ice cream joint over the years.”

Editor’s Note: The Review has continuously covered how COVID-19 is impacting Oberlin’s downtown businesses since the beginning of Ohio’s shutdown. Click here to read more about how local businesses have responded to the pandemic.