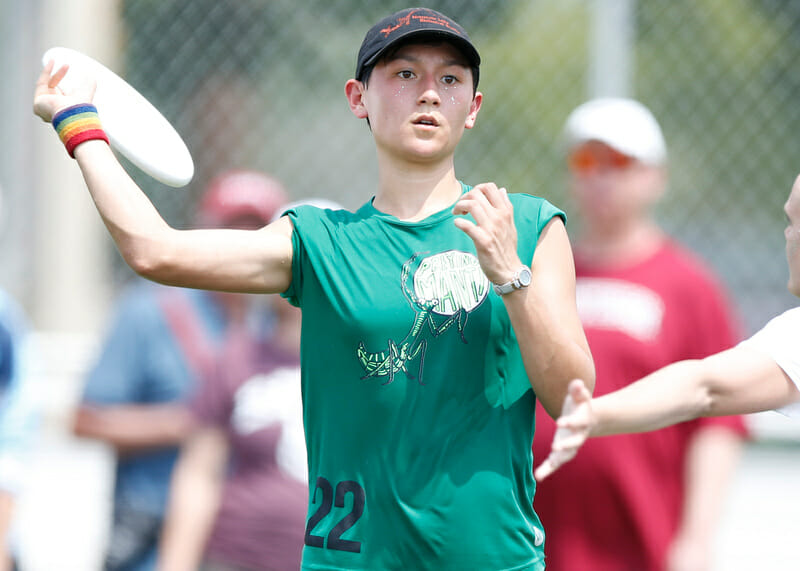 The award is presented annually by Ultiworld to Ultimate Frisbee players nominated and chosen by their peers for exceptional athleticism, sportsmanship, and leadership on and off the field. Cheng is the recipient of the fourth annual Donovan Award in the women’s division.

“The ideal candidate for the Donovan Award is one who ‘emulates the characteristics of talent, grit, loyalty, warmth, spirit, commitment and generosity,’” the team’s nomination statement read, quoting from Ultiworld’s description of the award’s intended recipients. “We believe, so strongly, that Abby is all of those things and more. She’s a baller at Ultimate, which anyone who’s seen her play can attest to.

“Cheng has the ability to dominate on the field in many ways and on both offense and defense,” Lehman commented. “She is a talented thrower, incredibly fast, smart about the game, and a gritty defender. She is always looking for ways to push herself and to continue to improve.”

While her teammates agree that Cheng dominates on the field, they also highlighted her leadership off of it. Throughout her time on the Manti, Cheng has worked on advocacy for the trans community and provided a platform for diverse voices in Ultimate.

“She’s organized and run workshops and clinics and meetings and more … learning and teaching us about everything from how to optimize practice time to how to best support ourselves and each other,” the team wrote in its statement.

Cheng spoke to her mission as a team member and leader.

“I strive to be a fierce, skilled athlete while spreading knowledge and inspiring dedication on my college team and beyond,” she said. “The happiest and most beneficial team is one where every person feels valued and loved.”

According to Lehman, Cheng accomplishes everything she strives toward, all while radiating pure joy and love for the sport and for those around her.

“I think it is this unique combination — all-star level skills that are accompanied by incredible character — that defines Abby and that the Donovan Award celebrates,” Lehman said.

Cheng’s teammate and co-captain, Zoe Hecht, spoke to Cheng’s contributions to the team.

“Cheng was an incredible leader, Ultimate player, and teammate,” Hecht stated. “She put her heart into the Manti and was always thinking about how best to lead and teach and give to the team, and her passion and drive fundamentally shaped the Manti into who we are today.”

Lehman also believes that one of Cheng’s most important qualities is her empathy and compassion for others.

“Abby is constantly checking in with the community around her,” Lehman said,  “ensuring that her teammates have the resources that they need for Ultimate and for their personal lives, that her opponents are respected, that her teams are competitive but first and foremost feel like a family.”

For now, the team has continued to stay in touch virtually through the end of the academic year and into the summer, with periodic team dances, film sessions, and homework study groups as the semester wound down. On the evening of the virtual Donovan Award ceremony, most of the team tuned in to watch, holding a virtual celebration afterward.

While Cheng has officially graduated from Oberlin, Lehman is excited to see how the team continues to foster a strong community next year. She is looking forward to seeing Hecht continue in her leadership role.

“Zoe shares the same empathy and consideration for her teammates, and so I am confident that the close-knit nature that has been a big part of the Manti’s success will continue,” Lehman stated. “She’s had a huge array of experiences with world-class players, and I am excited to see her continue to grow and thrive as a leader.”

While the team is sad to see Cheng go, they are excited to see what she does next. Lehman believes that Cheng is leaving the Manti with a strong foundation.

“Though there is no doubt that Abby’s absence will be deeply felt, I have nothing but optimism for the team in the hands of the new leadership core,” Lehman said.