On the Record: What It’s Like To Be On an Episode of Queer Eye 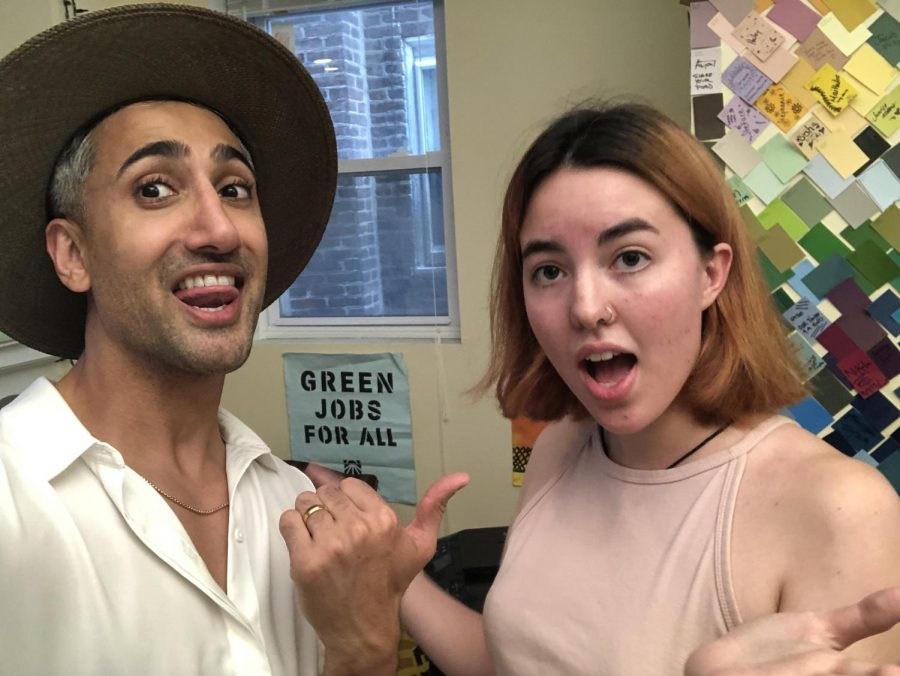 Editor’s note: Grace Smith has worked as a production editor for the Review, and was uninvolved with the editing of this interview. Smith is not working at the Review during the summer term.

Rising College third-year Grace Smith recently appeared on the Netflix show Queer Eye in an episode centering her friend and fellow Sunrise Movement activist Abby Leedy. The episode was filmed in the summer of 2019 while Smith, Leedy, and other Sunrise fellows lived and worked together in Chancellor House in Philadelphia. Titled “The Anxious Activist,” the episode sees the Queer Eye team remodel the Sunrise hub house. With help from friends like Smith, the Queer Eye team encourages Leedy to find a work-life balance that incorporates self-care into her fight for climate justice. Smith currently serves on the communications team for the Sunrise Movement and gave the Review the inside scoop about her experience on Queer Eye.

Can you talk a little bit about how your Sunrise house got featured on Queer Eye?

That was a wacky time. I tweeted [at Queer Eye] — I just remember it was in some cafe and all of the Sunrise fellows were around me. I said, “Hey, everyone, go comment on this tweet right now. I want this to happen.” I fully did it as a joke, but then all of a sudden we were getting emails from Queer Eye, and I was like, “Wait a minute.” Also, they said that they were scouting Abby before the tweet was even sent, so that’s pretty wacky. I think they knew they wanted to shoot in Philly, and they were just looking for an activist. Abby has a lot of good public speeches online — she’s a really good public speaker — I think that’s how they found her.

What did the process of working with them look like? Can you share any behind the scenes details that folks viewing Queer Eye may not know?

I think they came the week before they started filming and were just like, “Ah, it’s disgusting in here. We love it.” The producers were lovely — they were just lovely people. They came in and were like, “Thank you so much for inviting us into your home.” We did clean up a little before they got there, because we were just like, “We can’t let the whole world see how we really live.” I just remember [a producer] walking in and being like, “Hm, it’s a little less disgusting.” But yeah, they showed up the week before, just to scope things out and be like, “Thank you so much for letting us film.” We cooked them dinner, and then they came the next week on Monday, when they started filming in the house and renovating the first floor. And by Friday it was all done, and there was that party with Abby. So everything was renovated in five days. It was so quick.

Was the Sunrise team still operating out of the house while all of this was going on, or did you move out and have a different space to work and live in?

They gave us a hotel for the last night, which was very nice. They also gave us $100 because we couldn’t use the kitchen, and we said, “Thank you, Netflix, thank you.” Yeah, they just had money to throw around. It was crazy. They were like, “Oh yeah, we don’t want it to be too loud.” It was very nice. Sugar daddy Netflix.

What was the Sunrise team doing in summer 2019, before Queer Eye showed up?

I think we were doing two main campaigns. First, the climate debate campaign — the [Democratic National Committee] chair, Tom Perez, basically had a climate debate ban where he was like, “There will be no single-issue debates.” And then everyone was like, “Okay, well, y’all are taking five minutes every time to talk about climate at the presidential debates. You said that climate would be a top issue, and it’s very clear that you all are not keeping to that. Can we please have a climate debate?” So we were like, “Okay, let’s cause an uproar.” I think that was the same campaign where we slept outside the DNC headquarters for three days. And it was great — it got a lot of national attention.

But probably the more important campaign was the local Philadelphia oil refinery explosion. It was called the [Philadelphia Energy Solutions] oil refinery — it has had so many issues. It’s right next to a majority-Black community, and the rates of cancer are just incredibly high, and also respiratory illnesses. That refinery exploded — with no casualties somehow. There’s this group, Philly Thrive, with incredible, immaculate local organizing, that had been talking about the dangers of this oil refinery on local communities for years. Then [PES] exploded and put so many people out of work. That was our other campaign.

How did the whole experience with Queer Eye impact the Sunrise team?

I know that after filming everyone was like, “We can’t wait to go to Chancellor [House].” You know, the house was just gorgeous — sweet, sweet Bobby Berk, [the interior design expert on the show,] really came through with the designs. We finally had a dinner table that was big enough to fit everyone, instead of some people being forced to sit on the porch.

Was it tough trying to balance the pressures of keeping the movement going and keeping the team focused on that goal while also having to deal with a film crew and considerations around publicity?

Yeah, I think during filming there was quite a bit of stress around how we were displaying the movement. One thing was that in the beginning, the producers were like, “This is going to be our environmental episode. There will be only metal water bottles. We’ll be making good personal decisions. The Fab Five will bike to your house, but not the full way, just the half-mile in front of the house.” So I think a lot of us were nervous about it becoming [the idea that] a single action or individual action will change things. Abby was working really hard to slip in like, “Oh, actually 100 companies create 70 percent of greenhouse gas emissions, so we actually need to create systemic change, although composting is good.” Individual action can only get us so far — like not using straws. I think [producers] were nervous about it coming off like that, instead of like, “We need to literally dismantle the fossil fuel industry if we have a shot at the rest of humanity.” But in the episode, you know, they did include the 70 percent statistic. They did not explain why, but that was close.

Did Sunrise gain more publicity or more of an audience after this episode aired — have you personally gained more attention because of this?

Yeah, I definitely think so. It wasn’t a specific day that it all happened because Queer Eye didn’t announce when the season came out — Netflix was taking time for silence [in recognition of Black Lives Matter], which is very important. But when the season dropped, like in the week after, we gained a lot of followers. We didn’t push it as much on our end because we also wanted to be respectful of BLM.

Was there anything that surprised you about the Queer Eye team and their process, or any other last thoughts you wanted to share?

I don’t know why I was surprised by this because it makes total sense, but whenever there was a one-on-one conversation that would benefit Abby’s story arc — like there was one time where I was talking to Karamo [Brown, ‘culture and lifestyle’ expert on the show] one-on-one, just saying, “Hey, here’s Abby’s motto if you’re looking for a lifestyle thing — she is incredibly stressed out,” and he was like, “Oh, that’s good. Stop talking. We’re going to get the cameras to record this.” I don’t know why I was shocked by that because it makes sense that it’s not all going to be natural stuff that they caught on film and that it will be directed a little.

Also, the amount of bubbliness on-camera is very real. As an introvert, I’m always just in awe when extroverts have that much energy, you know? I literally just kept hugging Jonathan [Van Ness, the ‘grooming expert’ on the show] at any moment. I miss Jonathan so much. They are so good. Jonathan was a sweetheart, and also Bobby — incredibly underrated, I think.