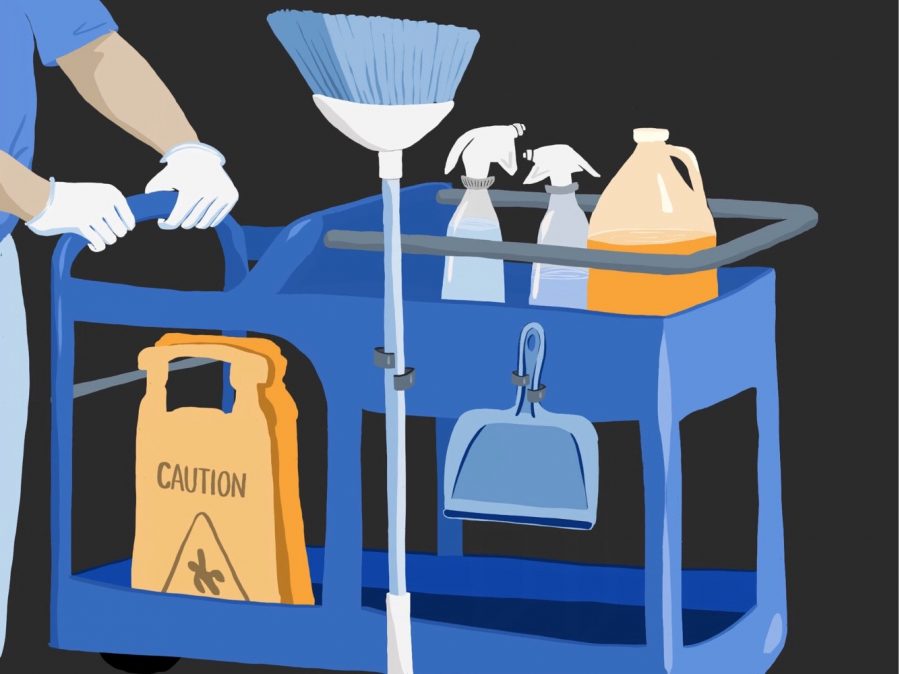 After outsourcing 108 dining and custodial positions, the College and the United Auto Workers union will begin effects bargaining to negotiate post-employment terms. Meanwhile, the National Labor Relations Board will investigate the UAW’s July 3 charge alleging that the College negotiated the outsource in bad faith.

On June 22, the College decided to outsource dining positions to AVI Fresh and gave the UAW a final proposal for custodial workers. A week later, UAW leadership opted against bringing the College’s proposal to a membership vote, and subsequently the College announced they would outsource to Scioto Services. The following effects bargaining process may include agreements for severance pay and job search assistance, among other things.

“We know that, while painful, these changes are critical steps to ensuring Oberlin can adapt to the challenges of the coming year and thrive in for many years to follow,” President Carmen Twillie Ambar wrote in a July 2 email to students announcing the outsource of custodial services.

The College initially announced that it was considering outsourcing in February as part of the ongoing effort to mitigate Oberlin’s financial deficit and cut $17.3 million from the College’s operating budget by 2025. The announcement was met with student protests, union busting accusations, the withdrawal of alumni funding, and commentary from local politicians in support of the UAW.

UAW leadership’s belief that the College negotiated in bad faith contributed to the decision not to take the proposal to a vote.

“We didn’t feel that the offer was viable to present to the membership,” said Buffy Lukachko, a member of the Oberlin UAW leadership team. “Most of the changes that were proposed by the College are mandatory subjects of bargaining and we haven’t negotiated over any of those items — the problem with that being that when the College puts all that additional language into the contract and asks the body to vote on it with no negotiating notes or any back and forth with the union, it’s really the College’s contract. It’s not the union’s contract.”

The College’s negotiating team maintains that they negotiated fairly with the union. Oberlin is permitted to outsource under the current union contract due to a clause that was negotiated in 2017, allowing the College to subcontract work. The College already outsources labor during Commencement and for summer events.

The College was not required to negotiate with the union to begin with and, according to Vice President for Finance and Administration Rebecca Vazquez-Skillings, the 16 negotiation meetings launched in February were genuine attempts to reach a compromise.

“[In February] we indicated that we’d made a tentative decision specifically because we wanted to engage in conversation with them,” Vazquez-Skillings said. “The College was under no obligation to do so; given the terms that are in the existing agreement we could have indicated that that’s what we were doing and begun a process of effects bargaining. We chose not to do that. And I thought we had some very good and thorough conversations with the union over time. Our hope had been that we would be able to identify some pathways forward.”

The College maintains that cutting personnel costs is a crucial and necessary step toward Oberlin’s financial sustainability. The months long Academic and Administrative Program Review process found that, even after the College instituted two years of salary freezes for faculty, over 60 percent of the College’s operating budget went to employee compensation. The One Oberlin report also stated that Oberlin’s hourly staff receive wages that are 34 percent higher than comparative colleges in the region.

While Lukachko acknowledges the pressing need for financial reform, she feels the burden was unfairly placed on the union.

“The UAW cannot be expected to carry all of the weight of [the budget deficit] — it’s too much,” Lukachko said. “We did some of the most horrible math problems you can imagine. We have 108 human beings and the College is telling us that we need to find $2.6 million out of 108 human beings. How do you do that? You know, what you would have to do? You would have to pay them $10 an hour. You know what that is? That’s poverty.”

According to Lukachko, a successful contract would have included a guarantee that the College would not outsource for the next three years, until the contract expired.

“We looked at them and we said, you know what? We’re willing to talk about this, but the one thing that we would like to hear from you is that you will give us a moratorium on outsourcing these jobs for the life of this contract,” Lukachko said. “If we give you wage concessions, we take the high deductible health plan, we take zero contributions to our retirement and we take all of these proposals, we want a moratorium on outsourcing. And they hit the roof. They said, absolutely not. And that was the end of that discussion.”

The College explained that it may need to quickly expand the number of custodial employees due to the ongoing COVID-19 pandemic  — and that it is therefore necessary to have the ability to outsource.

After seeing potential contracting companies visit campus early in the spring semester, chair of the Oberlin UAW chapter Erik Villar believes that the College planned to outsource even if UAW accepted the May 28 proposal for dining or the June 22 proposal for custodial.

“If we had taken this proposal back in May, they would have outsourced food service anyways,” Villar said. “I mean, they already had these people lined up. We had already seen them on campus, even though they were telling us that they still had nobody in mind, everything that they’ve done kind of leads [us] to believe that that was a lie.”

College administrators dispute this. Vasquez-Skillings believes that the College’s proposal would have been viable if UAW leadership had brought it to a membership vote.

While the outsourcing affects around 108 custodial and dining workers, there are approximately 49 other UAW members who will continue to be employed at the College. If the UAW voted to accept the College’s proposal, those other members would be affected as well.

“When we had voted to open up our contract, it was to discuss wage and benefits for these two parties,” Villar said. “It was never that we had expired our contract, that we were supposed to start negotiating over everybody that would be ultimately affected by opening this contract up. And [the College] kind of realized that, and they took advantage of that.”

UAW member and Carnegie Building custodian Pat Baker said she would not have voted to approve a contract if its terms might negatively impact the position of the 49 UAW employees who don’t work in dining or custodial services.

“Whether I’m going to have a job or not, it’s my brothers and sisters that are affected by this, the ones that are left behind,” Baker said. “I can’t vote on a contract to save my job to hurt everybody else.”

The College maintains that it never intended to pit the UAW membership against itself. According to Vasquez-Skillings, contract changes typically affect all union members and the UAW never proposed to change that precedent.

“I appreciate that point of view, but I can say with certainty that was not the intention of the College,” said Vazquez-Skillings.

The Cleveland region of the NLRB will launch an investigation to determine if the College bargained in good faith with the intention to was genuinely intending to reach a compromise. If the Cleveland NLRB determines that there was a violation of the act, they will issue a complaint to the federal level.

“It’s a long and bureaucratic process,” explained Joyce Goldstein, a labor and employee benefits lawyer representing the UAW. “That means that nothing happens fast. There will be no quick resolution to anything, by design — that’s how the law is structured. It’s not structured in a way that is particularly friendly or to the benefit of employees or unions.”

It’s possible that the Oberlin UAW will make a settlement with the College before the fulfilment of the NLRB process.

The College and UAW will continue to negotiate the effects of outsourcing. AVI has committed to offer employment to dining staff who complete their pre-hire process, and Scioto Services stated that they will interview all current custodial employees who apply.