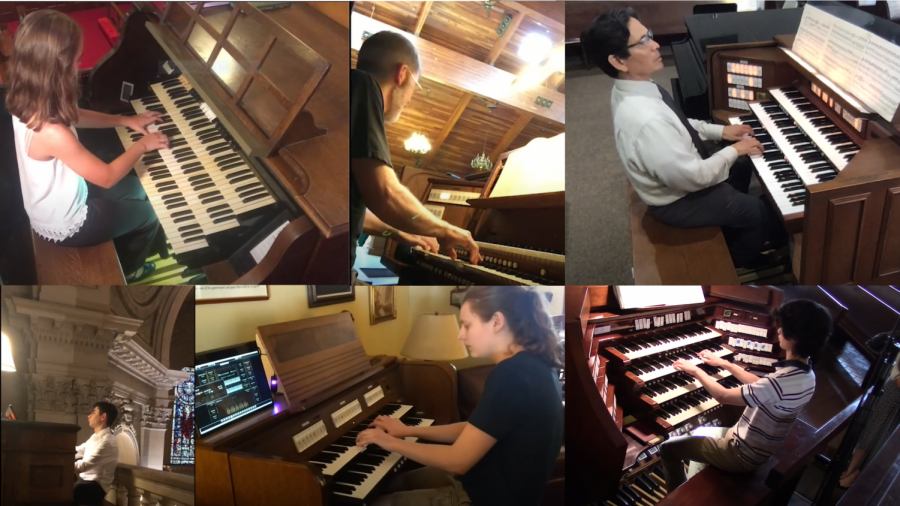 Video courtesy of the Office of Communications.

For the culmination of their summer program, six Oberlin Organ Academy students played across the country in a Virtual Student Concert. The Organ Academy — which typically takes place on campus — was offered remotely this year due to the spread of COVID-19.

Oberlin’s Conservatory — which typically offers a range of workshops, camps, and other programming on campus each summer — did not host any students in-person this year due to the spread of COVID-19. While several programs were cancelled altogether, others moved to online to preserve opportunities for learning, community building, and student recruitment.

The three programs that moved to an online format were the Organ Academy, the Flute Academy, and the Baroque Performance Institute. Credo Music, an independent program typically hosted on-campus at the Conservatory, operated remotely this summer.

The Conservatory’s other five summer programs — which include the Hinton Bass Institute, the Piano Festival, the Sonic Arts Workshop, the Trumpet Workshop, and the Vocal Academy — were all cancelled. The Thomas and Evon Cooper International Cooper Competition, which the Conservatory has hosted annually for the past decade, was also suspended this year.

Dean of the Conservatory William Quillen says these summer programs typically draw hundreds of musicians of different ages and skill levels to Oberlin.

“Summer programming is a really important area of activity here,” Quillen said. “A lot of programs are primarily for high-school-aged students … and we have other programs that are for professionals in the field. For example, in the [Baroque] Performance Institute, prominent early music and historical performance practitioners from around the globe come to work with our faculty.”

After the Organ Academy, the Flute Academy, and BPI were required to move online, Quillen says faculty restructured their programs while retaining a focus on pedagogy and learning.

“So much of it is sitting in large groups of people playing together, and obviously that just can’t happen now,” he said. “So [faculty] are coming up with something more dramatically scaled back, more about one-on-one lessons and lectures, things of that nature — so really trying to adapt to what the conditions will allow.”

The Cooper Competition is a major summer event at the Conservatory that was cancelled altogether. The initial rounds of the competition are normally held on campus in Warner Concert Hall, and three finalists receive the opportunity to perform with the Cleveland Orchestra. The competition alternates each year between piano and violin — 2020 was scheduled to be a piano year.

“[The Cooper Competition] brings in some of the world’s most prominent judges in those instruments and the world’s leading young artists,” said Gregory Fulkerson, OC ’71, Director and Jury Chair of the 2019 competition. “Unfortunately we had to cancel that this year. And it’s just outright unfortunate.”

Fulkerson notes that besides being a major event within the Oberlin community, the Cooper Competition places Oberlin on the world stage in classical music.

“Our isolation [in Ohio] is our strength and our weakness,” Fulkerson said. “Any event that places Oberlin in a real worldwide context of excellence … becomes extraordinarily important, particularly in the Conservatory.”

Credo Music offers summer programming to high school students, and has traditionally been hosted at Oberlin’s Conservatory. This year, some Conservatory professors continued to work with Credo students remotely. Rising Conservatory fourth-year Atlee Daniel — Assistant to Credo’s Founder and Artistic Director, Professor of Viola Peter Slowik — noted that having a virtual program allowed for some content to be offered for free and provided expanded opportunities for students to interact with faculty.

“We have a masterclass or two every day, some pre-recorded faculty videos for viewing, usually paired with a concert or activity at night,” Daniel wrote in an email to the Review. “Lessons happen in the early morning and afternoons, and we have group hangouts during the lunch hour. … Most students who attend Credo are high-school age, and a lot of them are starting to think about college options.”

“A lot of summer programs are important for engaging prospective students,” Quillen said. “That’s one of the real downsides of not being able to bring [students] here physically. There’s the facilities, our concert halls and our studios, which are great, and which are important to that recruiting that we do. But there is literally also a community — walk down the block, get a coffee and have lunch, show your parents around, walk around campus and go to the Oberlin Summer Theater Festival — all of this great stuff that ends up having a real impact on people’s interests.”

On the other hand, Quillen points out the time and expense required to travel to campus prohibits some prospective students from traveling to campus, and that online learning allows more people to take lessons and sit in on classes.

“Prospective students, when they’re deciding whether or not they want to commit, could just sit at home and Zoom in on classes,” Quillen said. “Obviously, nothing replicates and can take the place of on-campus experience. [But] even coming to campus for a visit or to take a lesson or to do one of the summer programs obviously involves certain challenges and barriers, whether it’s distance traveled or costs or anything else. Anything we can do to widen that space from which they enter is a huge plus for us.”

Besides summer programs for prospective students and aspiring professionals, Oberlin Conservatory has expanded its offerings for its current student community. This summer marked the beginning of Stage Left, an online series featuring discussions and performances by faculty, students, and guests. Oberlin Summer Academic Enrichment is also offering two music classes for credit to incoming students — Music Theory Jumpstart and Music of the 1970s.

Associate Professor of Music Theory Joseph Lubben, instructor of Music Theory Jumpstart, designed his course for incoming first-years who want to learn basic notation in preparation for Music Theory I. He says that the Conservatory’s summer offerings may also encourage uncertain returning students to enroll in the fall.

“A lot of the programs — summer programs, the academic programs on the College side, and those here in the Conservatory — were designed to keep students engaged while they’re still deciding,” Lubben said. “Then there’s this entirely brand-new summer 2020 bucket of courses and academic experiences that are very much targeted towards our incoming and returning students.”

As the Conservatory’s summer courses come to a close, Lubben is considering how he can apply the new remote teaching strategies he has developed to his classes this upcoming semester. Many of these efforts draw upon collaboration from fellow faculty members.

“We’re thinking about, not just little guest lectures for each other, but actually creating a lot more shared material, and trying to conceive of how to deliver this — how to engage the students as a group,” Lubben said. “And that’s kind of exciting. I think it’s a real silver lining to this.”

The Conservatory will welcome its students back to campus this fall and spring for a combination of remote, in-person, and hybrid instruction. Read more about the details of Oberlin’s plans for the 2020-21 academic year here.