Kyle Hartzell, “DIY as a Response to Change” Co-Instructor 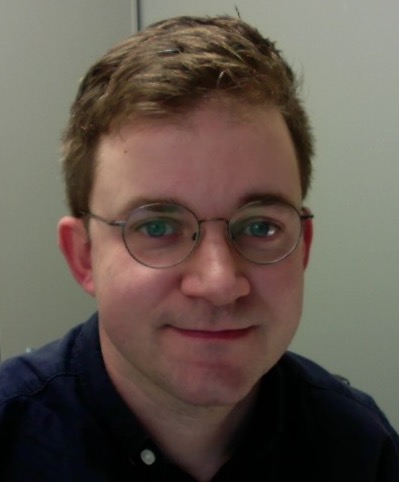 Educational Technologist, Digital Media Engineer, and Lecturer Kyle Hartzell wears many hats at Oberlin College — he works in the Center for Information Technology and the Oberlin Center for Technologically Enhanced Teaching, as well as in both the Cinema Studies and Studio Art departments. He manages equipment and spaces, teaches workshops for student production, and is teaching a sound design class in Cinema Studies this semester. This August, he and Fabrication Lab Supervisor Rachel Smith led the Winter Term course “DIY as a Response to Change,” where they examined DIY, or Do It Yourself, culture in the context of social movements and times of upheaval.

Can you tell me a little bit about the idea for this Winter Term and how you developed it?

Some colleagues and I got together and talked about running a making-in-response-to-crises kind of thing. They ended up not being able to help with the project, but we brainstormed around a bunch of things that were happening — with the most obvious being breadmaking — as people were responding to COVID. And since we knew that the Winter Term was going to be in the summer and it was going to be remote, we wanted to come up with a way to engage students in a physical activity that they felt was valuable and needed.

My design for it was to go through and look at different periods of history and how either a making or a DIY movement coincided with that. Some DIY movements horribly failed — like commune ideas and things like that — but the responses at all of these times were generally that people were taking on the labor that the market usually did. And they were either doing it to save money because it was a depression or a recession, or they were doing it to create some sort of social value.

What kind of projects did students end up generating?

The idea was that it would be something that they felt solved a personal or cultural need. For a lot of them the need was just to do something — do something with your hands, make something for others, or learn a new skill because we’ve kind of been waiting around to get back to school. And then a few of them wanted to do something a bit more outreach-y and involve others.

[College fourth-year] Loubna El Meddah El Idrissi is from Morocco, and she wanted to make a fashion project at first that, in her words, was decolonizing fashion. She didn’t end up making clothes, but she ended up making a stool-chair kind of mix that was Moroccan-inspired but a mix of a DIY Western thing, where she’s using a Western vegetable crate as the base, but then the cushion and all the adornments on it are Moroccan-inspired.

[College fourth-year] Zoe Iatridis started a Mail Art project. She wanted to reach out to people and just start communication, so she started making these hand painted postcards and writing messages like, “Hello, I’m Zoe, I’m making art and if you want to send something back, please do.” She was living in Oberlin, so she sent it around Oberlin and I think to some friends and is waiting to see what replies she gets. Being an art student, she wanted to revive this practice.

[Fabrication Lab Supervisor Rachel Smith] and I both did projects alongside them, so I made a wooden DIY bike stand. Rachel worked on a metal jewelry project called the Hand Metal Project. She just jumped into that community project that already existed, making small jewelry as a thank you to frontline workers.

It seems like a lot of the focus was around ad-hocism and DIY culture as a community engagement source.

I think the main part that we wanted to focus on in regards to that was about how all of these practices are community centered in the first place.

We talked a lot about how DIY and making have visual representations that people assume about them — you usually think of HGTV or maker spaces that are really fancy with laser cutters and things like that.

A lot of people assume that these projects are envisioned and done by a sole person, when in fact you’ve pulled the information from somewhere, you find the inspiration in a source from someone, you probably go out on a forum or talk to somebody on YouTube or that you know personally. We tried to encourage that — asking questions to YouTubers, or people you see online that are doing similar projects working — since we worked within Discord. It’s really just a chat page, so having channels and chats on there internally focuses on building a community of makers that you can ask things to when you want to do a new project, or you come up against some sort of problem. We had them do the research so that they could point to where they got their inspiration and the different historical things that have informed them. And they could, in turn, when they become comfortable enough with their making practice, point people to those things and create their own DIY instructions and be part of that community.

Where would you suggest people go if this is something that they’re interested in or looking to get started with doing?

It’s a daunting situation to feel inspired right now. Just doing little projects that keep you in the process of making are good enough. It’s still fun. You’re still working. It’s not a big, grand thing because there’s nowhere to put that right now. I think Rachel would say the same. She’s an artist, and I think everybody in the arts is challenged to come up with an answer or a statement or just a response to all the craziness that’s happening, by just jumping in and making something —  or by attending a protest or making a hand metal project for people. Before that, she had helped make some 3D-printed face shields for the hospitals along with Lorain County Community College. Just staying involved in making is what I’m seeing a lot of.

I know Oberlin Center for the Arts is doing a lot with trying to create media and reach out to people in situations like at Kendal [at Oberlin], where they’re still very much locked down and in quarantine and not able to see people — it’s very lonely and you don’t feel connected to your community. Finding projects like that are very important and not forgetting about that community is the first thing. I also think the bike co-op’s going to be working, the 3D printing club, the Pottery Co-op, the [Resource Conservation Team] — groups like that. I’m hoping students are going to find a way around some of the limitations.

Really anybody involved with making is going to have some sort of answer about what they’re doing and how it’s a little bit different. But I’d advise just reaching out to people if you’re finding yourself stuck —I think we all are a little bit stuck and we’re not really saying it enough.