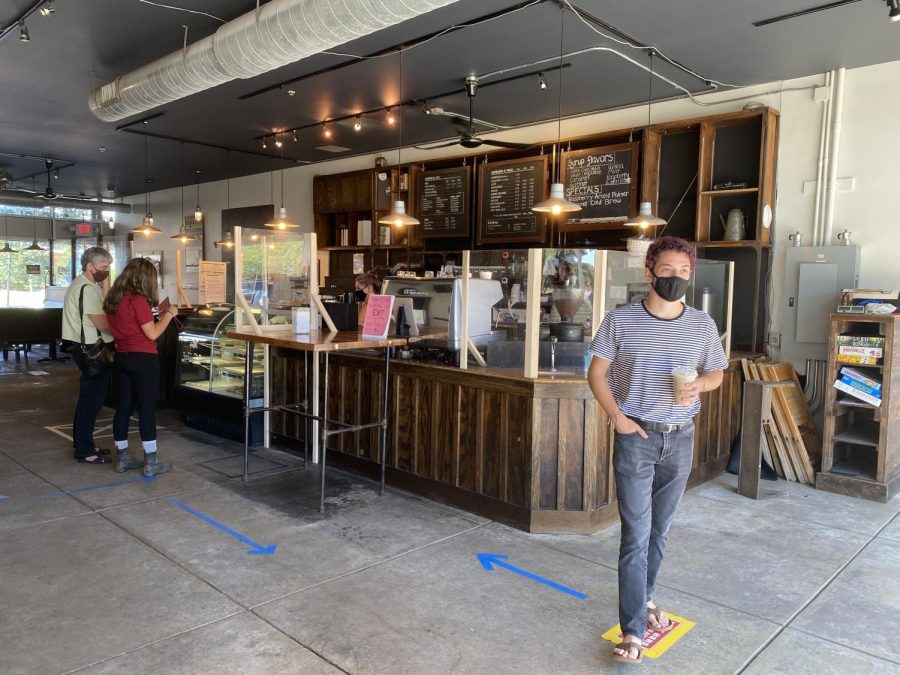 After downtown businesses suffered a slow summer of canceled events, College programming, and a state-wide stay-at-home order, the arrival of students this past week brings financial hope to some. However, College students’ return also prompts concerns about COVID-19 spread.

“It’s a twofold thing,” said Ben Franklin & MindFair Books owner Krista Long. “Clearly our downtown district relies on the College, and the students in particular for sales, so we’re enthusiastic about the fact that everyone is coming back. But then everyone is coming from around the country, different parts of the world, bringing the viral load with them.”

“I am optimistic about the plans the College has put in place, and I think that if students really embrace it and cooperate, we can have a safe reopening,” Long said.

Students are returning to a different Oberlin than they left back in March. Many businesses, like Ben Franklin, Slow Train, and several restaurants, have reshaped their services to offer socially distant pick-up options. Others have not survived the economic hardship of the last several months. Cowhaus Creamery, Herricks Jewelry, Oberlin Kitchen, Black River Café, and Quick and Delicious all permanently closed their doors this summer.

“The restaurants had a particularly hard job,” Ginko Gallery owner Liz Burgess wrote to the Review. “First, they had to adapt their menu and service to take-out only. Then when they were allowed to open for eat-in they could only seat a few people at a time, and many people simply did not feel safe eating inside. Their business dropped dramatically. Their expenses are even higher than the retail businesses, so they really took a hit, and continue to.”

Kim’s Grocery and Carryout has remained open for carryout throughout the pandemic. Restaurants including Aladdin’s Eatery, Lorenzo’s Pizzeria, and Catrina’s Mexican Restaurant have been open for dine-in service as well as patio seating since the end of May, shortly after Governor Mike DeWine lifted stay-at-home restrictions. The Feve began offering upstairs dine-in service in mid-June, as well as carry-out brunch seating in the ThiNi Thai outside patio.

Meanwhile, Agave Burrito Bar has remained closed since mid-March, and its management team is still deciding on long-term plans for the business.

Slow Train owner Jessa Klotz New has adopted significant changes in order to keep her business running through the summer.

“I think it takes a bit of motivation to rethink something you’ve been doing for ten years, and it kind of weighed down on us a bit,” said Klotz New. “So many of the businesses in town have closed, and we just didn’t want to be another one. … We were able to survive, which I feel very lucky for.”

Over the last few months, Slow Train has been solely operating outside orders and pick-ups and only recently began an indoor walk-through service.

“With everyone coming back, it just seemed impractical to not figure out a way to safely have people come through the shop to order and then leave,” Klotz New said. “So Slow Train, as of [August 22], went to walk through service. The Local is now accepting all curbside orders, and we have started doing delivery. It just became very obvious that if we wanted both to work, we needed to really combine resources both in staffing and in what we offer.”

Other businesses have adapted to shifting interests from customers. At Ben Franklin, while overall business has decreased, Long has noted increased interest in books, custom framing, and fabric.

“Fabric for mask-making that everyone is working on — that’s brought lots of people to Ben Franklin’s,” she said.

“We had our artists shift gears,” she said. “Some of our fiber artists are making new products like masks. … Our customers have been really supportive in trying to do local shopping so that we can all try to stay afloat.”

While most businesses had to adapt to a difficult summer, The Oberlin Bike Shop benefited from increased demand for outdoor activities during the pandemic.

As the fall semester starts and students return to campus, Oberlin residents and local business owners are counting on students to uphold their responsibility to the community and abide by the College’s reopening plans.

“It would be monumentally disheartening if the College went through all this protocol, and the businesses going through all of their procedures and updates and spending money on things they can’t necessarily afford to, but they have to so they can meet the safety precautions, and then to have to close down because of spread [of COVID-19],” Long said.

Klotz New hopes the College’s plans and consistent messaging to students over the summer will encourage students to take proper precautions.

“I think President Ambar has scared everyone pretty sufficiently with messages and being able to point to schools that have already messed up in terms of the students not following protocol and behaving,” Klotz New said. “I think Oberlin has done all the work, but it really rests on the students to be able to come back and really show an incredible amount of willpower and forethought.”

Nevertheless, many business owners eagerly anticipate the arrival of students and the reconnection of Oberlin’s town and College communities.

“I can’t speak for everyone in town, but I can speak for me and some of the folks I have been talking to, and we are so grateful for all of you to be here when you are here,” Klotz New said, as a message to Oberlin students. “Not just because of the business aspect but because you make this town what it is, which is a combination of all sorts of folks from all sorts of places.”