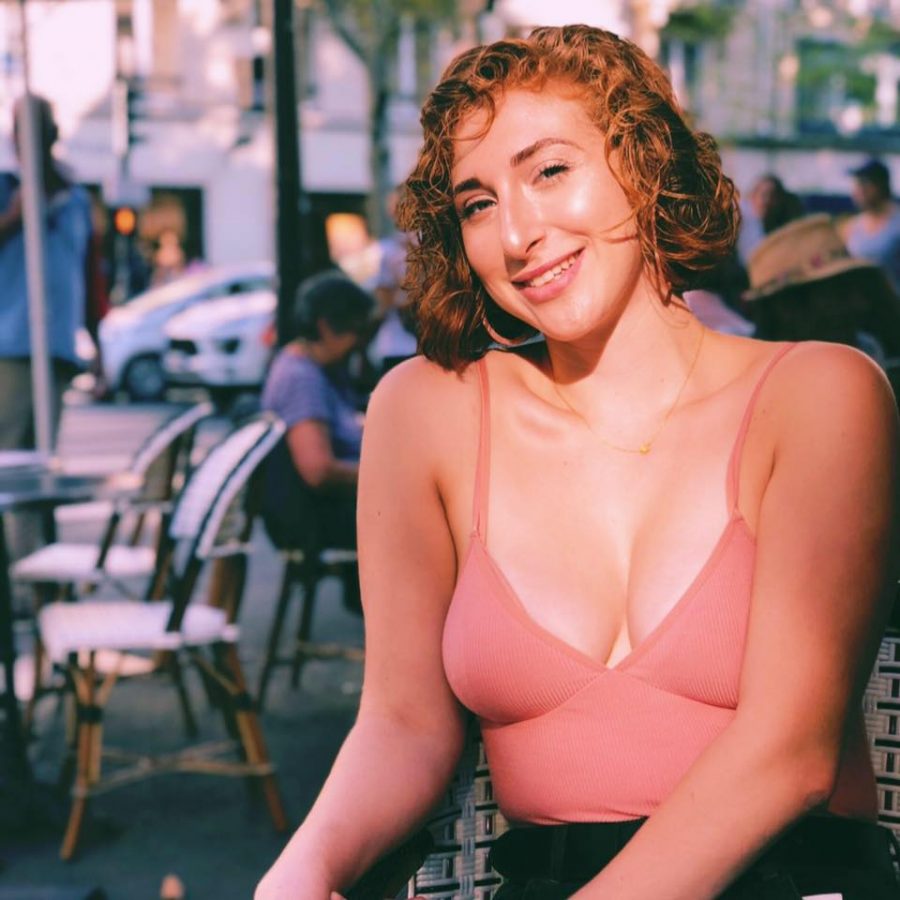 Jacey Davidson, OC ’20, started the Instagram account @oberlinoverheard, or Oberheard, in 2018. Oberlin Overheard features short, droll quotes heard around campus that are submitted by Obies via Instagram direct message. Davidson, who majored in Creative Writing and Art History, remained anonymous while running the account until last March when she revealed herself as the organizer behind it. At the time of this article’s publication, the account has amassed 2,728 followers and has 464 posts. Davidson spoke with the Review about running a popular social media account anonymously, her favorite posts, and what she learned from the project.

How and why did you start @oberlinoverheard?

It started because I wrote stuff down in the Apple Notes app with my friend, and I thought it would be funny. I was at a time in my sophomore year when I wanted to leave Oberlin. I looked at all that we had written down throughout my freshman year, and then I started to post it. I thought the overheard idea was so funny — like Overheard New York and Overheard LA. I was very tickled by the idea. I thought it was the highest form of comedy. I think it was a way to connect with Oberlin for me and feel a vibe so that I could have a connection to that place because it was hard to be there. Because I think it was hard to be smart and isolated and working hard, and that’s what Oberlin can be like. So it was a way for me to have a positive space, I guess.

Did the small size of Oberlin’s community affect the way you ran Oberheard?

Yes. Maybe because I mostly saw people that I knew by face or whatever, or I knew their names. Everybody knows all the jokes. You can make jokes about bigger places like New York or LA, but it’s so funny because it’s such a small group of people experiencing this very niche clubhouse style experience. And I think that smallness definitely had something to do with why it worked so well because people had all been in those spaces already — because there are only five places to go. We’ve all had that time where you said something sexual in DeCafé and then somebody else heard you, you know what I mean? You overshared in DeCafé, and now everyone’s listening to you.

Also, people at Oberlin are always up in other people’s business. It’s a pretty judgmental place. And because it’s so small, we all know each other, and people are listening. It’s a very public place. But the smallness plays into it because there are such specific, niche experiences here. 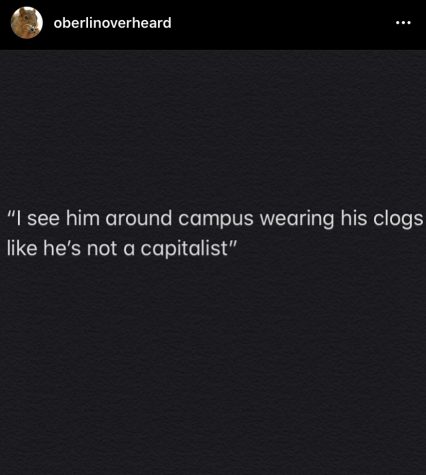 How did you get the bulk of your content? Were there specific spots?

People send it in. I mean, I would hear stuff at the beginning — maybe the first year or six months. But I always wanted it to be other people contributing. When I was doing it at the beginning of last year, I would get like 10 submissions a day. It was a lot. The volume was incredible. I did it for two and a half years, and for the second two years, it was mostly other people sharing — I just sprinkled in some things that I heard. I also definitely posted things and used it like Twitter. I posted Oberlin-related content that I would say, that I thought was hilarious. People were like, “you can’t do that.” I was like, “I don’t understand the question– I said it and it’s at Oberlin.”

So someone could have overheard it.

Also, it was funny when I got submissions from places that I had been — people would always send in Oberheards from a class that I was in with [Associate Professor of Sociology and Gender, Sexuality, and Feminist Studies] Greggor Mattson. Once I was in class, and someone was talking about the account. They were like, “Oberlin Overheard messaged me,” and I was like, “that’s crazy.” I would always post quotes from that class. [Professor Mattson] is very funny. I ended up writing a sociological essay about being Oberlin Overheard for that class, which was silly.

Why did you choose to be anonymous for so long as Oberheard?

Because then people would look at me! And they would read into it for me specifically saying it, which I was not interested in. By the people, for the people. I was just the catalyst, honestly. I definitely projected some of my personal opinions. I trashed a lot of athletes. Now one of the new admins is an athlete, and the page is more pro-athlete. I definitely egged on all the rivalries between North and South campus, too. Because they were funny things to say! 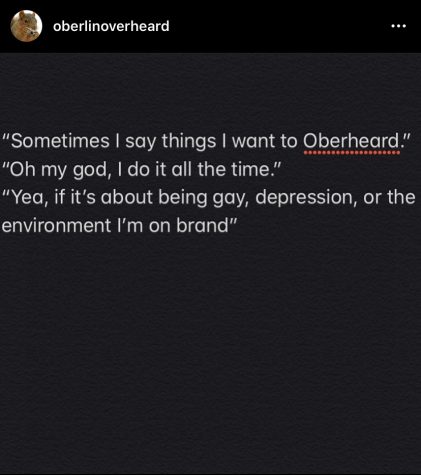 Was it fun to be an anonymous campus icon?

I don’t think I was iconic. But I told so many people, and I talked about it so much and so loud, I can’t believe more people didn’t know. It felt like being a tiny celebrity for me. But it was silly, honestly. It really didn’t affect me. I just liked it when I heard people talking about it. I liked to know that it was something that people were interested in.

The mystery is, of course, the most delicious part. I loved dropping little hints. I definitely told so many people who would then tell me, “Yeah, I know that already.” And I’d be like, “How do you know?” And they’d be like, “You told me this recently.”

Do you have a favorite Oberheard that you can think of off the top of your head?

I looked through a lot of them, because I categorized them for my paper for Sociology of Sexuality. I did it through a sociological framework that we learned about. I used Overheards, and I categorized them into political and sexual, because those were the most often used themes. On Oberlin’s campus, politics and sexuality are the topics.

I have a couple favorites. I love any one that says something “is the only ethical consumption under capitalism.” Most of those are sexual.

“You’re going to the Feve, right? Can you get me a save plate?” That’s so cute. Other schools have relatable places and stuff, but Oberlin has its own lingo.

“*pointing at the snow* look at all this white bullshit.” I love so many of these.

Honestly, my favorite might have to be “I thought I had mono for four months, but it turns out I just had depression.”

Okay. My actual favorite one. Here’s my favorite Oberlin Overheard. This is number one: “Wilder Bowl in the springtime is literally the panopticon.” That’s it. That wins. It has all of Oberlin, you know? All the best ones are theory-based. That’s funny, especially for a school where we’re all theory bros. It makes our brains big, but also a little bit smooth.

What do you think was your biggest learning experience from being Oberheard for so long?

The fact that people really want to form a community and they are searching out human connection. Especially at Oberlin, not that people aren’t searching out human connection, but there are a lot of missed connections because we’re working, and we’re busy, and people are young adults and interacting is weird. It was a really great way to not take ourselves too seriously. I also learned to not take myself too seriously. We could joke about it and have a community, which was nice. I didn’t feel like people wanted that before. I learned that that feeling was maybe just from my positionality or the spaces that I was in. 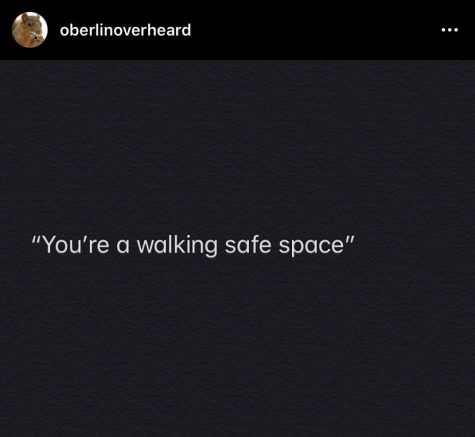 Obviously you left the project in good hands, but how does it feel to watch it grow and change after you’ve graduated? And in this COVID-19 world?

I think I would have done this even if it hadn’t been COVID-19, but I’m still logged in. I’m really trying not to interfere. I saw a DM, but I didn’t answer it. I have it just in case. And especially over the summer, it had sort of fallen off from me and the other people I left it with. But other organizations like Coronavirus Oberlin Mutual Aid Fund and ObieCare were popping up, and Oberlin Overheard had become infamous to so many people. I wanted to be able to use that platform in a way that was constructive. As we watched Instagram sort of transform into a tool for community-building this summer, I wanted to bring that to Oberlin. I think community-building and supporting one another are things that the student body does want to keep as one of its main tenets. And COMA raised like $50,000.

I also followed a bunch of the Class of 2024 because they’re super isolated, and I wanted to help them out. So I followed them and a bunch of other student orgs. Sometimes I go on there just because I know that the other admins are in school, et cetera and it’s hard to catch stuff. I just want to look for events and post them, so it can function as a little bit of a news bulletin as we transfer so much of our social energy to social media.