Tappan Square Becomes Stage for “Sila: The Breath of the World” 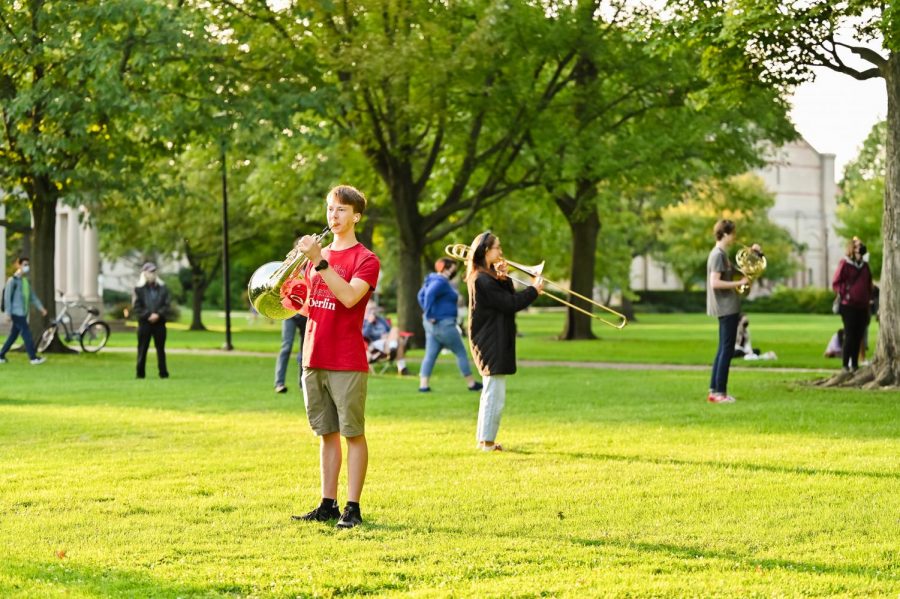 Audience members were encouraged to move between the socially-distanced performers during “Sila: The Breath of the World” last Friday.

Live music is yet another quintessential Oberlin experience complicated by the pandemic. But creativity and social-distancing prevailed last Friday when Oberlin Conservatory students took to the unusual stage of Tappan Square to perform “Sila: The Breath of the World” by John Luther Adams.

The experience was comparable to an installation in an art gallery. The musicians were spread across the grass and in between trees, radiating outward from the center of the square. Many audience members started out sitting or standing in place, but as time went on listeners began to weave through the socially-distanced performers to better observe and listen to the brass and percussion clusters.

The performance was conducted by Professor of Conducting Tim Weiss, who encouraged audience members to move around during the piece.

“It’s new music, and it’s more of an installation,” said Weiss. “For me, it’s a little bit like sonic sculpture. When you look at sculpture, you see it differently depending on the angle and distance you view it. In this case, it’s the same — depending on where you are in Tappan Square and where you move in Tappan Square, your perception and experience of the piece will be different.”

Leah Brockman, director of ensemble operations, aided the performers in keeping track of the piece and their music. Instead of the typical music stands and sheets of paper, audience members may have noticed performers wearing earbuds or headphones. Each performer was listening to an MP3 sound file, which enabled them to match pitches and grasp the structure of the piece regardless of where they were in Tappan.

Brockman managed the technical and logistical operations of the event along with Marjorie Gold, production manager and technical director of Conservatory Concert Production. Brockman and Weiss worked together closely on the performance. They decided to perform the piece with approximately 50 musicians, 15 of whom were percussionists.

Brockman also included the real-world sounds of leaves rustling or cars passing in the distance in the recording of the event, using two microphone poles at the center of the performance.

“I think the difference with ‘Sila’ is that it’s meant to incorporate and heighten the sounds of the environment,” Visiting Assistant Professor of Trombone John Gruber, who performed on Friday, wrote in an email to the Review. “There was a sense of interactivity with the environment that was quite different for us — we normally might get annoyed at a passing siren or cough! With ‘Sila,’ those ordinary sounds became part of the fabric of the music.”

Weiss deliberately arranged the performers to maximize sound quality, pandemic safety, and audience engagement. During the rehearsal process, he worked and reworked the physical layout of the performance several times to find the best balance between these factors.

While Weiss facilitated the rehearsal process, he was not conducting visibly during the performance itself. The organizers, audience members, and performers all felt the freedom expressed by “Sila.”

“Every piece has a different set of performance [issues],” said Weiss. “In most repertory that is conducted or led, you, on a very … fundamental basis … have the problem of playing together. But in this piece, you don’t play together. Every individual, at some level, creates their own pathway through the piece.”

Sam Hoffacker, a fourth-year Percussion Performance major, was grateful to be a part of the performance.

“Listening to the environment in Tappan on Friday night was an almost spiritual experience for me,” wrote Hoffacker. “It’s helped me reconsider the true beauty of the outdoors, especially after being inside for the better part of six months.”

While Oberlin looks towards a very unconventional fall 2020 semester, “Sila: The Breath of the World” was a breath of fresh air for a pandemic-weary Oberlin community.