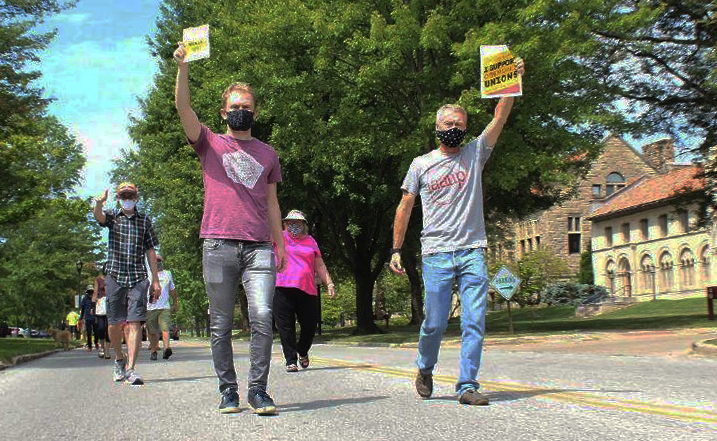 Courtesy of the Chronicle

The 1833 Just Transition Fund has raised almost $150,000 in pledges to support the United Auto Workers union members who lost their jobs last spring when the College outsourced 108 custodial and dining services workers. The fund will mostly be distributed to about 44 former UAW custodians who have not found jobs that offer comparable compensation.

The fund was initially created by alumni last spring in response to the College’s announcement and to student activism in support of the UAW members. It has received 562 pledges totaling $149,410.93 as of Sept. 9.

“We, as alums, believe that the College should not be harming workers in these ways — workers who have given, in some cases, decades to this community, and if the College won’t make sure that they have a just transition out of their direct employment, then concerned alums will step up and say, ‘We actually care about you, and we’re not going to give donations to Oberlin College,’” said Rebecca Givan, OC ’97, associate professor of labor studies and employment relations at Rutgers University and a member of the fund’s steering committee. “We’re going to redirect [donations] to these workers who, through no fault of their own, have been significantly harmed by really cruel College policies.”

Now that the fund has raised a significant number of pledges, the fund’s board is working on incorporating as a nonprofit organization. Once it has received tax-exemption under a 501(c)(3) status, the fund can collect donations from people who have committed money and distribute the funds to those who lost their union jobs.

When the fund started in the spring, the steering committee pledged to donate the fund to the College if they decided to keep the UAW contract to offset the loss of savings.

This summer, the College announced that it had finalized new contracts with AVI Foodsystems for dining and Scioto Services for custodial work. The College also completed the effects bargaining process, providing workers who were let go from College employment with a severance package that included three months of pay and a year of health insurance.

Les Leopold, OC ’69, one of the creators of the 1833 Fund and Executive Director of the Labor Institute, says that the terms don’t make up for the lost jobs.

“The term we use in the labor movement is ‘made whole,’ having suffered not much damage or no damage at all,” Leopold said. “That’s why I said the severance … is kind of irrelevant because, I mean, it’s good, but ‘made whole’ is over the lifetime of the worker and not over a few months.”

AVI Foodsystems has a longstanding relationship to the UAW at other campuses they serve and has already reached out to the union to create a contract. AVI has also rehired many of the former CDS employees who were let go in the spring. Many of these employees will have wages and benefits comparable to what they received from the College.

Because of this, the fund considers many of the dining workers and some custodial workers to have been “made whole.” Therefore the majority of the money raised by the fund will be distributed to the janitorial staff who lost their jobs and were not able to be rehired at comparable compensation levels.

“We will focus on the custodial workers,” Leopold said. “I suspect that we will give 90–95 percent of the money divided up equally for the custodial workers that had been let go and don’t have jobs, and we’ll reserve some money for people who are in very special circumstances.”

The fund has received support from union representatives who view it as a source of hope during difficult times.

“I think it’s a beautiful idea to do an aid fund for the UAW workers that Oberlin College has outsourced,” wrote Buffy Lukachko, a member of the Oberlin UAW negotiation team in a statement to the 1833 Just Transition Fund. “Throughout this experience, the UAW workers have felt devalued and othered by the administration. Your group’s efforts are a very moving reminder that the Oberlin we all love still exists. It’s just not apparent in the actions of the current decision makers.”

Both Leopold and Givan attribute the fund’s success to how important the UAW workers are to the Oberlin community and students’ experiences at the College.

“Anyone who lived on campus, which is almost everyone who graduated from Oberlin, understands how absolutely essential these workers are and feels how painful and unnecessary the decision was,” Givan said.

Leopold urges fellow alumni not to lose hope in the College and to instead see the fund as an alternative to breaking ties with Oberlin altogether.

“We’re really worried about the disappearance of this vital part of the Oberlin progressive tradition,” Leopold said. “Justice for working people is very important to a large group of students, faculty, and alumni. … This is our chance to try to right that wrong, and hopefully in the future Oberlin will come back to its broader economic and racial justice roots.”