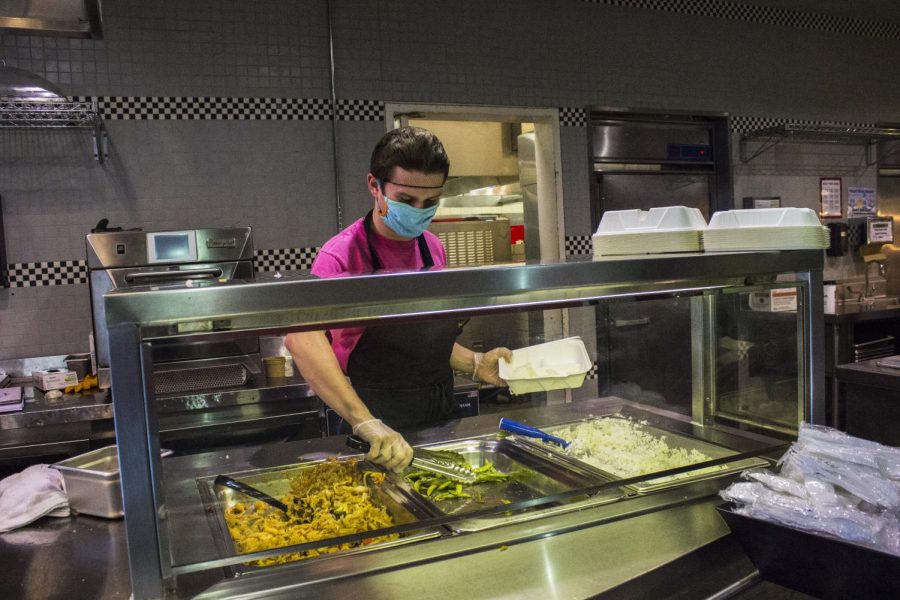 Students who work for AVI Foodsystems have reported difficulty taking time off, getting breaks, and receiving proper training for their jobs.

New third-party vendors for dining and custodial services have been transitioning to Oberlin’s campus and community this fall, introducing COVID-19 policies and procedures. AVI Foodsystems is facilitating on-campus dining, while Scioto Services is providing custodial services. While AVI has rehired 90 percent of the former dining staff, Scioto has only hired one former custodial employee.

Campus dining was previously administered by Bon Appétit Management Company, and custodial services were managed through the College without a third-party vendor. Both departments had employees managed by the College and unionized through the United Auto Workers. Following a months-long bargaining process with the union, the College announced this summer that they would outsource these jobs to AVI and Scioto, sparking controversy among union advocates.

AVI Foodsystems has worked to rehire many of the College’s former employees. Despite the scale of AVI’s operations as the largest family-owned food management company in the U.S., Resident Director Caleb Crandall and Director of Operations Lilkeisha Smith say that they prioritize community and dialogue in their work at Oberlin.

According to Crandall, all previous dining employees were invited to a welcome session with AVI representatives, where they were encouraged to interview with AVI and discuss job opportunities. Ultimately, 90 percent of the previous workforce was rehired, with employees’ previous pay rates and seniority honored. AVI representatives were unable to speak to the benefits offered, as negotiations with the union are ongoing.

Additionally, AVI hired seven workers who had worked in custodial at the College but had previous experience working in dining. AVI had also hired 73 students as of Sept. 17, with a starting hourly pay rate of $13.

While AVI was able to rehire many of the College’s former employees, Scioto Services has only hired one custodian who previously worked for the College. According to Senior Vice President of Business Development Steve Niswonger, only five members of the College’s previous custodial team applied and four did not finish the online application process.

According to Pat Baker, formerly a UAW member and Carnegie Building custodian, Scioto was unresponsive to her emails about a new position.

“They invited me to interview — they thought I was qualified and wanted to take the next step,” Baker said. “That was through an email. I reached out to them three or four times, never heard a word back from them. Once I learned they were already on campus, I even emailed them and offered to start training. … At no point did they ever get back to me after inviting me to interview.”

Despite only rehiring one custodial employee, Niswonger says that Scioto’s transition to Oberlin has been smooth.

“The Oberlin transition is going well,” Niswonger wrote in an email to the Review. “We were fortunate to be able to assist Oberlin with completing some of the summer cleaning. This helped us to get more acquainted with campus quickly. Our team is continuing to learn the nuances of [Oberlin’s] campus. We are proud of the high quality associates that we have hired. Everybody has a positive, ‘can do’ attitude.”

Niswonger wrote that Scioto’s pay starts at $15 per hour, which he says is higher than the regional market average. He also described benefits including paid vacation, healthcare, vision, dental, and 401k. Scioto is also offering workers higher wages when they clean up after a positive case of COVID-19.

“I am very proud to say that Scioto and Marsden were as ready for the pandemic as any company in our industry,” Niswonger wrote in an email to the Review. “We had pandemic plans in place (that we were able to execute). Due to our experience of cleaning and sanitizing hospital surgical suites, we also had COVID remediation protocols. We had sufficient short term quantities of PPE.”

In her July 2 email to the Oberlin community announcing the College’s partnership with Scioto Services and its umbrella company, Marsden Services, President Carmen Twillie Ambar highlighted the importance of these emergency response qualifications given the COVID-19 pandemic.

“Scioto will bring to bear expertise in emergency response services, decades of experience in sensitive environments, and the resources to adapt quickly to changing needs for disinfection, prevention and remediation, in addition to the highest standards for daily cleanliness and safety,” Ambar wrote.

AVI is also adapting to the new COVID-19 environment.

“We’re in an unprecedented time right now, so we’ve been doing steady and focused partnership with the College of, ‘How can we be impactful and keep everyone safe during this time?’” Smith said. “Because not only do we want to feed everyone, but we want to keep everyone safe, including our team members.”

In addition to mandatory mask-wearing, monthly testing, and plexiglass installations to keep employees safer, part of AVI’s COVID-19 response that is specifically tailored to Oberlin’s campus has been expanding and de-densifying the College’s dining facilities by adding several dining locations across campus. AVI also introduced reusable eco boxes to encourage environmental sustainability in a time when dining is in a fully grab-and-go format.

AVI has also committed $6 million to infrastructure updates at the College. However, it has no concrete plans for these funds yet.

“Right now, there isn’t a specific commitment because what we really want to do is get in here, become integrated with the campus, learn the culture, really have those relationships be built with students, faculty, everybody involved, and really determine what’s best for this money to be spent on,” Crandall said. “Obviously we don’t want to change what makes Oberlin such a unique and amazing campus.”