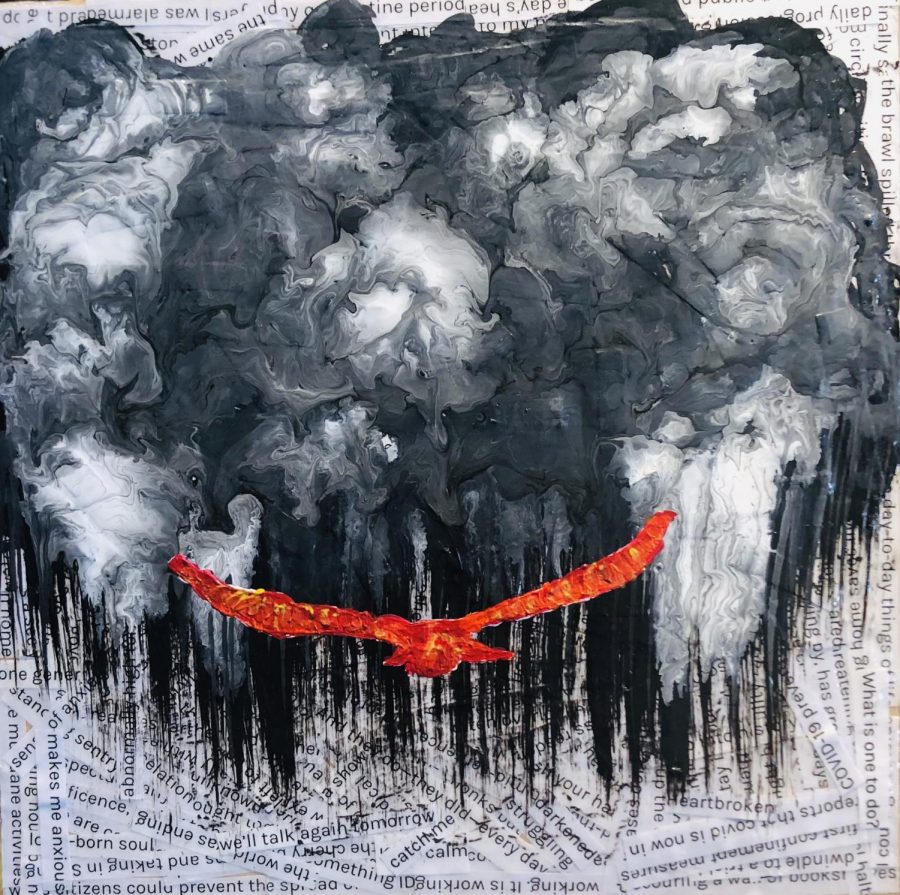 College first-year Maya Rogers published this image in Away Journal "as a representation of the general feeling of anticipation and pause that she feels represents the time of the COVID-19 Pandemic."

Writing a travel journal during a time of widespread border closures and restrictions might seem almost impossible. But for the Away Journal team, it was a challenge they were more than willing to take on. The magazine covers travel for pleasure as well as travel due to displacement, exile or refugee status — well positioning the publication to adapt to the changes imposed by the pandemic.

Professor of Rhetoric and Composition and Director of the Writing Program Laurie McMillin began Away Journal in 2014 to feature meditations on travel and place that diverge from the stories of tourism and spectatorship seen in many travel magazines.

“We started it with the idea that there were lots of different kinds of travel and not just the kind of thing that you see in The New York Times, Sunday Magazine, or something like that,” McMillin said.

When everything began to shut down in March, McMillin wasn’t too worried about the future of the journal. Its small size made the shift to virtual work easy. If anything, the pandemic was the perfect writing prompt. Thus was born “Sheltering in Place: Dispatches,” a four-part series featuring writers in quarantine grappling with isolation as the world shuttered its doors.

The journal received a large number of submissions in March in spite of travel bans. Perhaps it was that with their newfound free time, people were processing things they hadn’t had time to process before, revisiting old travels or meditating on the meaning of movement.

The last section of the series featured the work of five first-years who had written pieces about the meaning of place in a pandemic as the final project of “Uncovering COVID-19: Critical Liberal Arts Perspectives,” a virtual summer course offered to high school seniors who had been accepted to Oberlin.

One of these featured students was College first-year Hazel Feldstein, who published “Café Isolation.” The piece is structured like a drinks menu and artfully walks the reader through Feldstein’s experience in quarantine. Inspired by a quote from T.S. Eliot’s poem “The Love Song of J. Alfred Prufrock,” Feldstein began to consider the weight of each action in isolation.

“Pre-quarantine, I was always going out and not really paying attention to what I was consuming as much,” Feldstein said. “But then when I was at home, everything, like every action, felt a little bit bigger because it was the only thing that I was doing.”

Even with all the free time Feldstein had, she still felt stressed. Experimenting with poetic structures was a way for Feldstein to process and create.

Travel, place, and disruption were especially prescient subjects for spring semester study-abroad students whose trips ended suddenly. Jonas Wanstok, a College fourth-year, was one such student. While the College couldn’t make up for a lost trip, McMillin taught a second-module class about travel writing in crisis aimed at students in this position — many of whom were sent home from studying abroad. The course encouraged students to meditate on the different ways one can explore and learn, even in place.

“That was a big part of what we talked about in class at first, just this idea of the self and how the self was affected by traveling,” Wanstok said. “It’s not like traveling has some kind of exclusive monopoly over self-discovery.”

This realization gave a whole new meaning to Wanstok’s time moored at home.

The idea harkens back to the journal’s beginnings; the name Away came to McMillin while on a walk-in 2014. On this walk, she realized that it was only upon stepping away from our usual settings that we can see things differently. While our understanding of place and movement has shifted immeasurably, there are still hidden paths to find numerous aways. Even a walk around the block or, as Wanstok said, traveling from one room to another can illuminate so much for us.