Off the Cuff with Alexia Hudson-Ward, Former Azariah Smith Root Director of Libraries 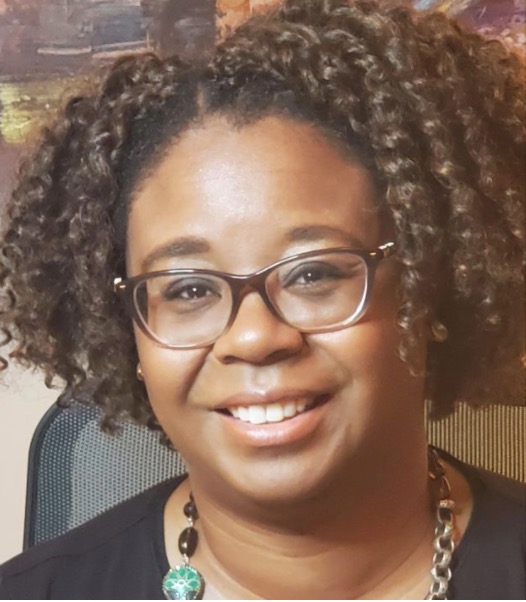 Alexia Hudson-Ward, the Azariah Smith Root director of libraries, will leave Oberlin College at the end of September.

Alexia Hudson-Ward, the Azariah Smith Root director of libraries since 2016, has accepted a new position at the Massachusetts Institute of Technology starting at the end of this month. At Oberlin, Hudson-Ward led the four campus libraries to become the College’s top-performing administrative unit in 2018; chaired the libraries’ first diversity, equity, and inclusion task force; and spearheaded collaborations with the Allen Memorial Art Museum. Previously, she worked in the Camden County Library System as well as university libraries at Temple University, Pennsylvania State University, and West Chester University of Pennsylvania. She has also served on the National Executive Board of the American Library Association. Hudson-Ward will be the Associate Director for Research and Learning at MIT, overseeing several library programs including Information Delivery and Library Access and the MIT Libraries’ community engagement initiative.

How did you know you wanted to work in a college library? Was that decision influenced by your time in college?

I grew up in Philadelphia, and Philadelphia is known for amazing public libraries and amazing academic libraries — but also a really rich network of cultural heritage organizations, museums, and archives, et cetera — that work very closely with public libraries. My family also was and remains huge readers. I grew up with my grandparents in the house and they always loved having a really nice library. I would have to definitely give credit to my family who very much instilled a love of reading, a love of knowledge, a love of details, and a love of curation in me as a child.

When I went to college — I’ll be very honest with you — my relationship with the libraries was very transactional. When I was an undergraduate at Temple University, it was like you went in there, you got the stuff needed to do your coursework, and you sat down and you did your work. We didn’t have librarians come into our classes to teach us how to use the resources.

I had close relationships with the archivists, history professors, and professors in general. One of my majors was African American Studies, so it was because of those professors that I fell in love with primary resources in a different way. A lot of the stories in the history of Black women were deeply hidden. You couldn’t find primary resource material easily, or, if you did, you had to travel literally to Washington, D.C. to get the resources from the Library of Congress or the National Archives. Simple things like finding information about diverse populations was a chore, and we didn’t have the full internet back in those days. We really heavily relied on books and printed material.

I didn’t want anyone else to have the experience that I had with my university library. I wanted to try to make the library experience more enriching and more interesting, and … bring back some of my good memories of the connection between libraries, and museums, and galleries, and archives. That’s what prompted my interest in working in academic libraries.

How did you fulfill the dreams you had when you were in college to make the library more accessible and more inclusive to all students, no matter what they were studying?

It was amazing for us to do what I frequently refer to as boundary-bending work — beyond the traditional pathways of what an academic library system would do — that we could also coalesce around museum-like collections. Collections-as-conversation was really important to me. We were also able to continue to bend some boundaries as it related to our digital initiatives work, our archives work. We were one of the first, if not the first, liberal arts college libraries to have a visual resources curator. … We brought an array of diverse speakers to the college — some from our faculty ranks, some from the community, and then some from the larger scholarly community to address a range of topics — which was really wonderful.

The other thing, truthfully, is that I wanted to see our staffing ranks a little more diverse than what they were when I arrived. It has been exciting to bring new colleagues to Oberlin as well, who are helping us to continue this important work through a very diverse lens and to have partnership with staff at every level on major initiatives like diversity, equity, and inclusion.

All of those pieces, to me, definitely fulfill my childhood desires for the libraries to be considered a welcoming space and a place for engagement, and learning, and knowledge at Oberlin. I have often said that libraries democratize learning, and that’s really something that was important to me — is that whether you as the independent person from the community, as the independent scholar, or also as the Oberlin student — that there would be things that you could learn on your own. There would be resources that you could engage with independently, but then you could also very successfully achieve your coursework and your ultimate goal of earning your degree.

A couple of years ago, you oversaw the naming of the Mary Church Terrell Main Library and the establishment of the Terrell book fund. Can you speak to the significance of this event, and your subsequent editorial expressing that the Review didn’t cover it enough?

I felt like it was a huge missed opportunity for the Review to not just simply be a repository of opinion related to what Oberlin does wrong when it comes to matters of diversity, equity, inclusion, and accessibility. For the newspaper to diminish the importance of the Terrell Main Library naming event, to me, it just felt like diminishing Mary all over again.

After we named the main library after Mary Church Terrell, ’OC 1884, the nation re-embraced her. The National Portrait Gallery requested her portrait along with the two other Black women that she graduated with from Oberlin. The National Portrait Gallery made the decision to elevate Black women who were erased from the suffrage movement. Then there was a program that invited members from the general public to help transcribe Mary’s records in the Library of Congress. Then, Melinda Gates created her own digital initiative where she highlighted the records of Mary Church Terrell. [Terrell] has been all on PBS. She’s an anchor image in the Ancestry.com TV commercial. Now, it’s rare for you to look at anything historical related to the suffrage movement and not hear about Mary Church Terrell.

In your editorial, you wrote that “in the difficult periods when Oberlin disappointed her, Mary remained committed to our principles and held our institution’s leadership accountable to co-create a better Oberlin for future generations.” Do you see yourself in that quote?

Mary Church Terrell, as an alumna, was hurt that Oberlin elected to implement segregated housing on campus. That was not her experience when she attended the institution and she was very surprised. Given her commitment to civil rights and social justice, I understand why her heart was broken. Yet, she remained steadfast to Oberlin’s principles and made sure that she continuously engaged with the college.

Oberlin has not disappointed me at all. I realized that I had a responsibility to co-create Oberlin for the 21st century. To be frank, I’ve been kind of more disappointed in my inability to get a whole lot of other things done that I wanted to get done, but I have been nothing but proud of Oberlin. I’ll be honest with you, a lot of times when Oberlin students protest, some people would approach me as if it was some extreme circumstance, “Oh my gosh. What’s happening there?” But to me, protest is pedagogy, and protest is really about the student experience. In that way, it was wonderful to see you, as students, function in the same way that Mary Church Terrell did. You have made me proud because students hold faculty, administration, and each other accountable. So I have had nothing but a delightful time here. I’m going to miss Oberlin deeply.

What are you hoping for the new Azariah Smith Root Director of Libraries to do to carry on your legacy?

I am exceptionally proud of the great work that has been done in the libraries in the four years that I’ve been here. I will say that it can’t be done without a great and committed staff. No leader can ever be successful on their own.

When I arrived, the libraries were already doing good work. Yet they were really interested in doing new and creative things that would have probably scared other people, because there was such a big risk entailed in it — especially embracing diversity, equity, and inclusion as a central point. I would say without question that I know that my successor is going to be welcomed by a fantastic staff, by a student population that loves this library system, by supportive colleagues, senior administration, by staff at every level who have nothing but positive things to say about their engagement with the libraries and a community that really enjoys engaging with it. The only thing I hope my successor carries forth as a part of my legacy is a sincere commitment to infusing diversity, equity, and inclusion in all elements of the work of the libraries.

So you’re headed to MIT. What are your thoughts about that?

It is really an amazing time in history to join the Massachusetts Institute of Technology Libraries. Of course, none of us could have predicted this pandemic, and none of us could have thought about how seriously education would be reshaped in such a short period of time — largely enabled by technology.

My new team is large — a little over 70 people. My unit is the unit for research and learning, and one of the principal things we could do at this time in history is to think about how we will create a more inclusive, computational future. And what is the role of MIT libraries in that? How do we really catalyze that in a way that can also be inclusive, because sometimes it can be a little intimidating, right? It’s a big school. Big reputation — international reputation.

And so, how do we break down those barriers? Because it is MIT libraries, and when we do something the ripple effect internationally is immediate. How do we leverage that strength? Not just for the good of the students and the faculty and staff at MIT, but how do we shape the future so that everyone can be a part of it, given the resources and given the wealth of the Institute?

I’ve recently re-read Charles Dickens’ A Tale of Two Cities — a book that has a so-called evergreen appeal because of its themes of income inequality and social justice. A book that continues to inspire me is written by John Ortberg, and it’s called If You Want to Walk on Water, You’ve Got to Get Out of the Boat. It uses the Gospel of Matthew and the parable of the disciples walking on water to challenge individuals on the mental barriers that prevent you from being your best, brightest, and most creative self.