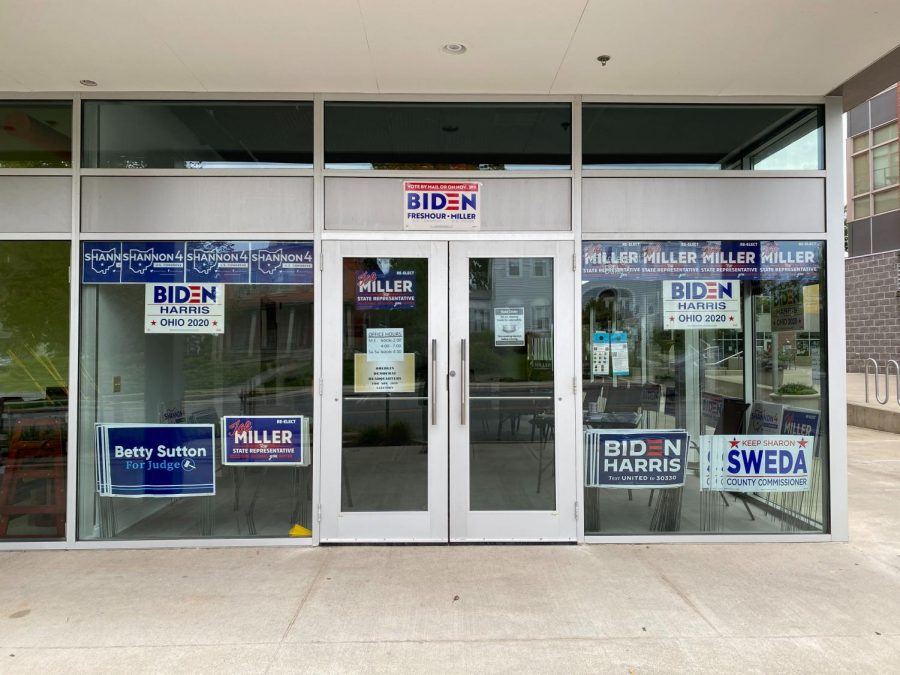 The office opened on Sept. 26 and was funded by Miller’s campaign for re-election to the 56th State Congressional District. At the opening event, Miller highlighted how a Biden campaign office could help turn out voters at the ballot box.

“We’re trying to prove that Ohio is a flippable state,” Miller said. “I believe that I owe that to my constituents, to open an office here and to allow them to be active, engaged, and continue on in the same — what I would call a spirit of Oberlin.”

In response to the COVID-19 pandemic, the office has also had to change the ways it reaches out to potential voters in Oberlin. Door-knocking has been replaced by leaving flyers on door handles; other campaign activities involve textbanking, phonebanking, letter-writing, and social media engagement.

“I think that our local and state candidates have had to fill a void in terms of coordination that the coronavirus created, and that they have had to reimagine and relearn and redirect what it means to campaign,” said Maureen Simen, a co-leader of Lorain County Rising, a local activist group.

Simen also talked about how COVID-19 has made it more difficult for the campaign to reach potential voters at Oberlin College.

“We used to go on campus during orientation week and we would register students and talk to them about … the kind of ID they would need, promoting what the College was going to do to support that,” Simen said. “Now we can’t be there and so the information is just not as controlled.”

The recent electoral history of Lorain County makes it a critical location for the 2020 election. Even with over 133,000 ballots cast, Lorain County swung for Hillary Clinton by just 131 votes in the 2016 election. Lorain will again prove to be an important county for the presidential campaign this election year.

“I’m in [the] fourth Congressional district, and the districts will be redrawn — both of them, both for federal districts and state districts in 2022. So that’s another huge piece of what’s going to be happening,” Peterson said.

The office is near Slow Train Cafe at 65 E. College St. Anyone interested in getting involved with Ohio Democrats can contact Lorain County Democrats. Students with questions on how to request an absentee ballot, check their voter registration status, change their voting address, and more can seek information on Associate Professor of Geology Zeb Page’s student voting resource document.