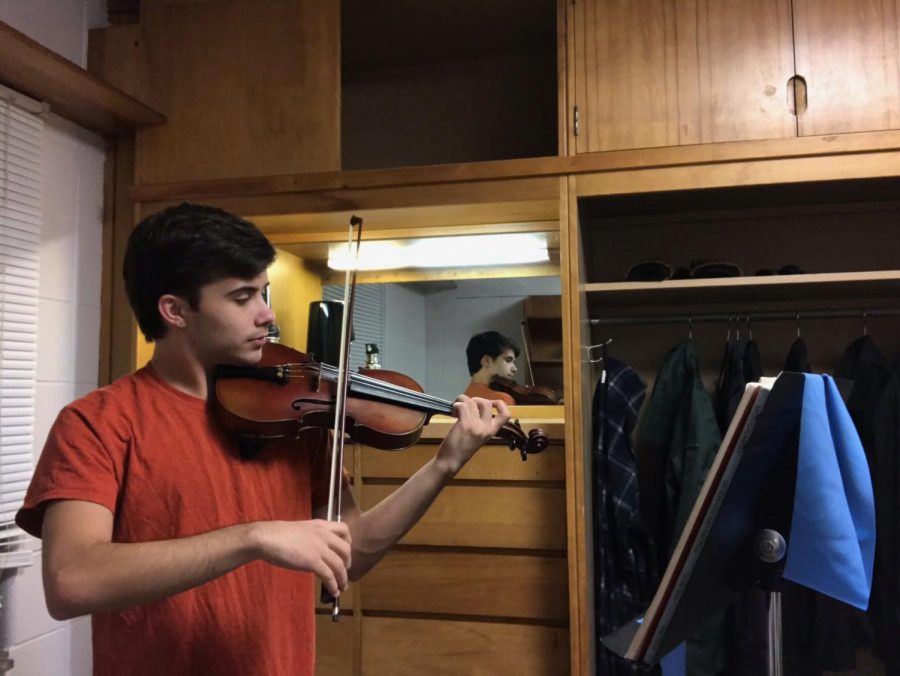 Limited access to traditional practice spaces has created new roadblocks to making music and learning collaboratively for Oberlin Conservatory students. However, even in the face of challenge and change, Conservatory students have mostly retained and adapted their practice habits, even while many are practicing in their dorm rooms.

This semester, Conservatory students majoring in easily-transportable instruments were provided chairs and stands in their individual rooms to practice. Most of these students live in East or South Hall, which have been designated music-making communities this year. Students who major in instruments that aren’t as easily-transportable — like piano, bass, organ, or percussion — were assigned individual practice rooms in Robertson Hall. College students can also reserve up to two hours per day in designated practice rooms in Robertson.

Conservatory second-year oboist Addie Carter, a Residential Assistant in East Hall, has actually felt more focused because her practice space is now in her dorm room.

“Personally I’ve noticed I practice a lot more now because I just practice in the room right next to where I sleep — I feel like it’s a lot more accessible for me personally,” Carter said. “My instrument is with me almost a hundred percent of the time. So that’s very different from going, practicing, putting it in a locker, and forgetting about it for like 12 hours.”

At the same time, Carter worries that practicing, working, and living all in the same small space will become exhausting.

“I feel like burnout is something I will experience,” she said. “I haven’t gotten there yet, but having it all just be one scenery I think is gonna be a challenge in the future.”

Many ensembles in the Conservatory are still happening in-person, but with new restrictions including distancing requirements, capacity limits, remote or real-time coachings, and reduced time allotted for classroom reservation.

Chris Dahlke, a second-year viola performance and TIMARA double major, has found that some distancing measures have affected the ways he approaches his schoolwork. His TIMARA work on his computer is always within reach, but his access to the studios and in-person feedback from professors has been significantly decreased.

“While most of the work I do in TIMARA is on my laptop, the pandemic has affected how easily and often I can access the studios, which [are] a great [place] for me to practice the techniques I learn directly from class,” Dahlke said. “Lessons and collaborations are now pretty much entirely on Zoom now instead of in-person, which definitely is affecting [me] in the same ways other classes have been.”

Conservatory second-year and Jazz Voice Major Chris McDole has an assigned practice room in Robertson and feels that the shortage of opportunities for the collaboration that comes from rehearsing together is a great loss. The students in his studio have tried to compensate by offering consistent feedback on each others’ work and holding remote listening sessions.

“We started to make it a point to try to critique each other, make constructive criticism, and maybe [point] each other to some new records that we should check out, or just talk about concepts, talk about music,” McDole said. “It’s kind of beautiful. I really do miss singing in an ensemble on a regular basis. But I think now this whole pandemic taught me to really appreciate and be diligent about the time that I spend when I’m in those rehearsal spaces.”

While the pandemic has undeniably devastated music communities across the country, Conservatory students maintain confidence in their practicing habits and capabilities despite the limited practice space. Dahlke, focusing on the immediate future, says he is learning to be proud of his work in these trying circumstances.

“The pandemic is super weird, and I’m sure it’s affecting people in ways that we don’t even realize,” he said. “It is easy to feel like you have to be more creative because you suddenly have more time to yourself to work. I try to reject this and just accept that things are uniquely messy right now and anything I can accomplish is a win.”