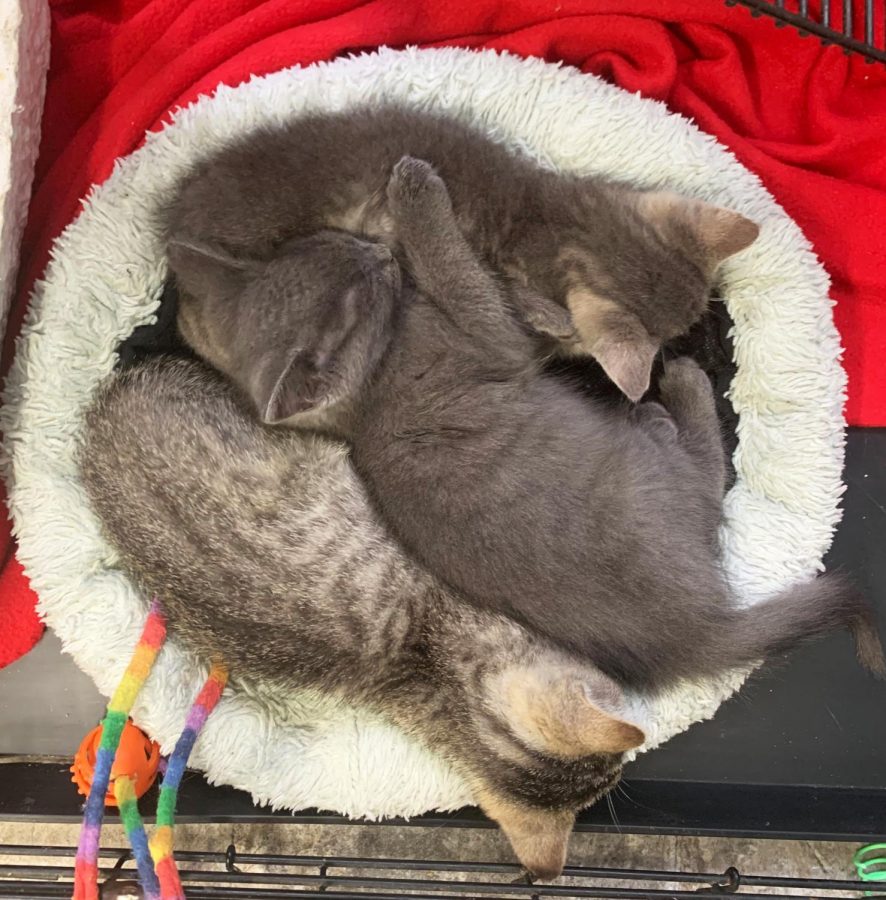 Jazz, Jasper, and Jeremiah cuddle as they nap in the backroom of Ginko's.

The craft store Ginko Gallery & Studio’s back room is usually filled with people, eagerly waiting to cuddle a newborn kitten. Petting a kitten lowers a person’s heart rate to provide stress relief, as well as releases serotonin and dopamine, two feel-good hormones in the brain.

“I never anticipated the symbiotic relationship between students and kittens,” Liz Burgess, the store’s owner, said.

Visiting the kittens in Ginko’s is a well-known activity for current and prospective students, townspeople, and visiting families. However, during the pandemic and this time of societal and political unrest, the desire for kitten-time at Ginko’s has increased.

“Students live in an odd world with few pets … and with the pandemic there are fewer people to safely touch or hug,” explained Burgess. Unfortunately, due to COVID-19 restrictions, only four people are allowed in the backroom at once to be with the kittens.

Although the most obvious benefit of human-kitten interaction is stress relief, the kittens also benefit greatly as well. Cats in the wild naturally develop to be feral, surviving on their own outdoors and having no contact with humans. Kittens must be exposed to humans by 8 weeks in order for them to become a domestic cat that can safely interact with people —  Burgess’ tender caring for the kittens paired with student interaction socializes the kittens effectively so that they are suitable for adoption. This is the key to a healthy symbiotic relationship between the students and the kittens, Burgess explained. “Kittens need socializing; students get small fuzzy creatures to cuddle and love.”

Some kittens at Ginko’s are as young as one day old, while others are discovered at six weeks old. Community Action to Save Strays, a prominent nonprofit, volunteer-run animal rescue group, was established 20 years ago with a mission to save the increasing numbers of stray cats and protect feral cats in Oberlin. While stray cats can be socialized and adopted, feral cats cannot. CATSS volunteers locate adult strays’ homes or find them a new adoptive family, and protect adult ferals by temporarily trapping the cats to vaccinate and neuter to keep the cat population under control.

Due to feral cats’ high reproduction rates, many kittens are abandoned in bushes and alongside roads. Kittens left to fend for themselves outside have only a 25 percent chance of survival. CATSS aims to prevent kitten overpopulation and make sure that existing kittens are raised safely. Each year, CATSS relies on Burgess to foster and socialize between 80-100 kittens so they are ready to be adopted out.

Burgess began fostering when four kittens were abandoned in her shed. The vet taught her how to properly bottle-feed and raise the kittens, and she earned a reputation as a kitten-raiser. Rescue groups continuously contacted her to foster kittens, and due to her flexible schedule as an independent artist — this was before she opened Ginko’s — it was easy to spend time caring for the kittens.

“If I had to go to a meeting or art show, I just carried them with me in a cardboard box or Rubbermaid tote,” she recalls.

When Burgess opened Ginko’s, her schedule lost its flexibility, and she stopped fostering kittens. However, she eventually realized she could keep kittens in the back storeroom and care for them throughout her workday. This kitten-fostering project was a secret for a little while, but as soon as people heard the delicate meows, word spread. Before long, the storeroom was filled with people eager to interact with the kittens.

While visitors mainly see the cuddly parts of raising kittens, caring for a neonate kitten is labor intensive. Kittens are born helpless with no eyesight, hearing, or ability to digest food by themselves, so they must have their bellies rubbed at each feeding. This task is time-consuming, as kittens must be fed every two or three hours around the clock. Burgess cannot leave the kittens in the Ginko’s storeroom overnight as a result, so she takes them home each day. Once the kittens reach four weeks old, they are more independent; they explore, play, eat on their own, and use a litter box. However, this does not make Burgess’ job easier. The cages and play areas require more upkeep, including frequent cleaning, emptying litter boxes, and filling food bowls. She also keeps an eye on the kittens’ health, administering shots and bringing them to the vet in the event of a sickness.

The issue of stray cats is increasingly worsening in Oberlin. However, with the help of townspeople and students, the Oberlin community can face it head-on. Oberlin students routinely clean and feed the kittens, as well as transport them to vet appointments. Visiting the kittens in Ginko’s also helps, as socializing them makes it easier for CATSS to get them adopted. Students can also help CATSS directly by donating or volunteering here.