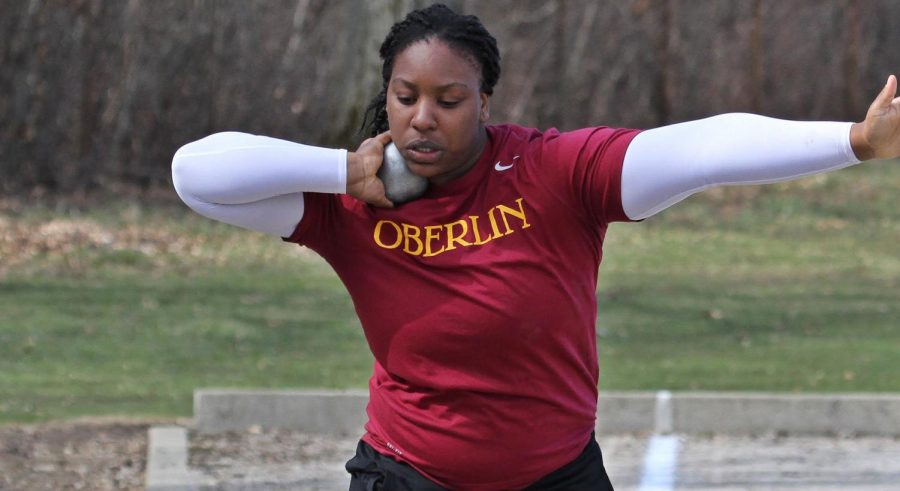 There are certain names in sports that everyone knows because of an athlete’s impact on not only their sport, but on the culture and spirit of the sporting community. Serena Williams, LeBron James, Simone Biles, and others have fundamentally changed how that their sport is played and perceived. Oberlin has one of these legendary names, too. During her time here, two-time track and field national champion and eight-time All-American Monique Newton, OC ’18, was a force to be reckoned with — and remains a community leader as she works toward earning a Ph.D. in Political Science at Northwestern University.

Newton, who was also the first ever national champion from Oberlin College, believes that her greatest achievements came when she set and witnessed new records.

“My greatest athletic accomplishment was any time I was able to do something first and any time I was able to repeat it,” Newton said. “I was the first thrower in the history of the program to make nationals. I was part of the team that won its first conference titles. I was the first woman national champion in school history, the first field athlete to win regionals, and I went on to do that four times in a row.”

She credits her success to Oberlin’s Athletic department and her team, for supporting her goals.

“I wouldn’t have been in the winning positions if it weren’t for my teammates and the community I had, including the track and field program and the whole Athletic department,” she said. “I know that my accomplishments mean just as much to my teammates and my coaches as they do to me. Because I wasn’t practicing alone, and they were pushing me to do better.”

Nevertheless, her influence on Oberlin goes beyond her athletic achievements. When her coaches and teammates talk about Newton, their faces light up as they describe her impact on the Oberlin community. Associate Head Track and Field Coach John Hepp described Newton as one of a kind, not only because of her outstanding athletic ability, but also because of her dedication to the well-being of the track and field team.

“The impact that she made was so much more than just her athletic achievements,” Hepp said. “To say that Monique is a natural leader would be an understatement; she’s one of these people who’s just so dynamic and magnetic, not only in her personality but the confidence that she exuded, the team-first mentality that she had, and the way that she brought people along with her — it was such a natural thing for her, and she inspired others to do the same.”

Her former teammate and one of the most renowned sprinters in all of Oberlin’s history, Lilah Drafts-Johnson, OC ’18, shares this sentiment.

“She was just someone who knew what she was capable of and put in the work to let that be expressed,” Drafts-Johnson said. “She led in a way where you’d see her working hard, and that in itself was inspiring, which is one way she led the team. Monique is someone who makes everyone feel comfortable and feel important.”

Drafts-Johnson even coined the term “Monique-isms” to describe how she inspired her teammates to be the best athletes possible.

“There are so many Monique-isms where she would say something, just her being her, talking about the way that she moves through the world, and it was really meaningful and helped me figure out how I could be the best athlete I could be,” Drafts-Johnson said.

To others, like former teammate Jahkeem Wheatley, OC ’19, Newton is not only a role model, but someone that they consider family because of her guidance and constant support.

“She’s someone who’s always been there for me, from my time at Oberlin until now,” he said. “She’s always been a guiding force in my life, whether it be athletics, academics, social life, family life — she’s the role model I could always look to. She’s more than a teammate, more than a classmate. She’s my big sister.”

Outside of athletics, Newton was a Mellon Mays scholar, working with Charles Peterson, associate professor of Africana Studies, to study Black political engagement in Cleveland. The Mellon Mays program introduced her to research and set her on the career path to earning a Ph.D. Her current research is centered on Black political engagement, looking at the impact of traumatic events occurring in low-income, predominantly Black neighborhoods and how they affect local political behavior.

Director of Track and Field and Cross Country Ray Appenheimer is certain that Newton’s academic interests and leadership abilities will change the world for the better.

“When her interest in politics began to grow at Oberlin, I remember telling her that she needs to become a U.S. senator,” he said. “Her leadership skills, her ability to bring people along with her, are so unique. Nothing would make me happier than one day casting a ballot for Monique. In any way she takes her career, she’s going to change lives.”

Newton is still involved in Oberlin athletics as a member of the John W. Heisman Club Next Generation Board, working to increase alumni engagement in the sporting community. She recently participated in an alumni panel run by Oberlin’s Black Student Athlete Group. For Newton, the formation of BSAG has been a crucial part of creating a community for Black athletes.

“I’m a huge supporter of the newly formed BSAG,” she said. “As a Black athlete, I didn’t have that during my time, and it would have been transformative for myself. It was amazing to participate on the alumni panel and have important discussions about what it means to be a Black athlete at Oberlin and how to navigate the challenges that come along with it.”

As Newton moves through her career at Northwestern University and beyond, she will never forget her time at Oberlin and the relationships that she cultivated.

“I’m forever grateful for my time at Oberlin,” she said. “The people I’ve met there are truly exceptional. The relationships I built at Oberlin will last for the rest of my life. And I have to give a shoutout to Coach Hepp for changing my life. I wouldn’t have been at Oberlin without him.”

Newton is happy to assist and network with current Obies, and can be reached at [email protected]. Readers can also follow Newton on Twitter @cvo_monique for further insight into her research, Chicago, and Laker nation fandom.