Oberlin Professors Weigh in on a Narrowing Election 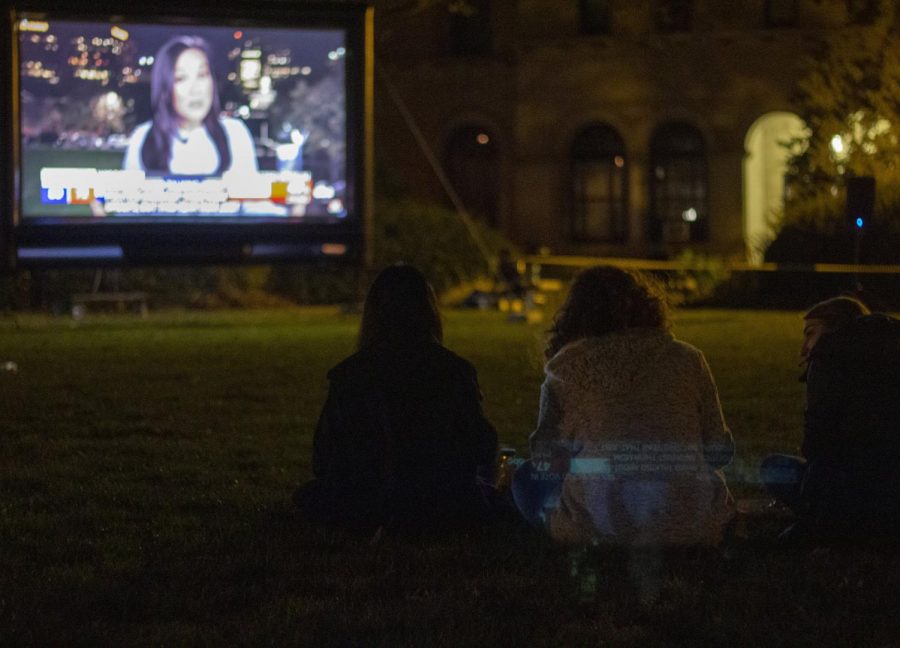 Although a tense race continues, some Democrats in the Oberlin community are beginning to let their guards down in hopes of a blue victory in Nevada. Still, many are concerned about President Donald Trump’s declaration that he would contest absentee ballots in the Supreme Court in the event of a Biden victory. As the Oberlin campus and community keep a close eye on the tallies still trickling in, professors reflect on the past two days and what is yet to come.

Based on Wisconsin and Michigan going blue and the current swing of Nevada and Arizona, Professor of Mathematics and Statistical Modeling Jeff Witmer feels confident in a victory for former Vice President Joe Biden.

“Biden’s ahead with absentee [ballots] yet to be counted, and that’s going to help Biden,” Witmer said. “Pennsylvania, we won’t know probably for a few more days, and that’s going to be really, really close. … From what I can tell, Biden doesn’t need either Pennsylvania or Georgia, given he picks up Arizona, which he seems to have.”

Others, like Erwin N. Griswold Professor of Politics Mike Parkin, were initially less confident in a Biden victory.

“I was worried,” Parkin said. “When I went to sleep last night, I said to myself, ‘Okay, there’s your head and your heart here. And your heart is really worried, but your head should tell you that mathematically, this looks better for Biden than it does for Trump.’ And I kept thinking, ‘Yeah, but what about 2016?’ I think that ultimately I was just really exhausted.”

While Biden is narrowing in on a national victory, Democrats did not perform well locally. Lorain County went red for the first time in over 30 years, and while many hoped Biden could swing Ohio this year, the state went to Trump by over half a million votes.

Although some polls projected a Biden victory in Ohio, Witmer was not convinced.

“Even though Biden had a chance, I expected that Biden was going to lose Ohio and also lose Iowa, which is how it turned out,” Witmer said. “That did not surprise me.”

Trump’s Intentions for the Supreme Court

After 2 a.m. on Thursday morning, Trump falsely declared an early victory, despite an abundance of uncounted votes and several states with no declared winner. He also reiterated that he would contest absentee ballots in the event of a Biden victory.

“We will win this,” Trump said at a White House press conference. “And as far as I’m concerned, we already have won. … We’ll be going to the U.S. Supreme Court.”

It is not possible for Trump to bring a case directly to the Supreme Court. A new legal battle would have to work its way through the lower courts before the Trump campaign could ask the justices to weigh in. Even then, there’s a chance the Supreme Court would not take the case.

“Trump would have to have a case — something would have to present itself,” Parkin said. “There was so much litigation before the elections that some of these questions got decided. In Pennsylvania, the question of how long do you wait before you stop accepting ballots has been decided. If it hadn’t been decided, then that would have been one of the avenues that he could go through.”

The way things are shaking out, Assistant Professor of Politics and Comparative American Studies Jenny Garcia is not convinced that a Supreme Court case would end well for Trump.

“If Biden ends up winning Arizona, Nevada, … then he doesn’t need Pennsylvania,” Garcia said. “And Trump really does seem to be homing in on Pennsylvania, like ‘I’m going to appeal that to the Supreme Court.’ If [Biden] wins those states, then it becomes more difficult for Trump to do anything with the Supreme Court.”

Witmer is largely skeptical that the Supreme Court would side with Trump. He says that it is trying to recuperate its reputation after the 2000 election.

“In Bush v. Gore, … those five justices seemed to want Bush to win, and they arranged for Bush to win through some legal maneuvering, and this damaged the credibility of the Supreme Court in the eyes of many Americans,” Witmer said. “Chief Justice [John] Roberts cares about how the court looks to America. He really does. … I would be very surprised if the Roberts court did something outrageous like [say], ‘Votes were actually counted and reported, now we’re going to erase them because they came in after midnight.’ That is almost inconceivable.”

Still, many people remain concerned. Garcia referred to Justice Brett Kavanaugh’s opinion last month in which he wrote that Wisconsin should not extend its deadline for receiving absentee ballots. Kavanaugh believes that states “want to avoid the chaos and suspicions of impropriety that can ensue if thousands of absentee ballots flow in after election day and potentially flip the results of an election.” Some Democrats have interpreted this statement as a signal from Kavanaugh that he would support Trump’s challenge of a Biden victory.

“That for Democrats is a bit concerning because it shows a willingness … to engage in the process,” Garcia said. “And people might argue that it shows an indication of where he would fall on the issue. … Having six conservative justices on the Supreme Court is a favorable thing to the Trump campaign.”

Trump’s statement also brought up other concerns for Garcia.

Garcia believes that Trump’s statements throughout the election season have set a concerning precedent.

“We have all these institutions that govern how our democracy exists, how we go through these processes,” Garcia said. “They’re very important, and I think they’re fairly robust. I think sometimes what gets under-discussed is the importance of norms that govern elected official behavior and presidential behavior. These are things that are just as … important as our actual institutions themselves. Rhetoric like ‘They’re trying to steal the election’ — that’s an immense violation of democratic norms.”

In stark contrast to the tight race that played out on election night and into the following days, many major news outlets forecasted a landslide Biden victory. For some, this harkens back to the 2016 presidential race when many models failed to predict Trump’s path to victory.

“In 2016, it was just shocking,” Parkin said. “But a couple of months after 2016, if you looked at what the pollsters had done, you could accept the argument that, well, they always told us that Trump had a chance. … But I think pollsters are going to have more to answer for after 2020 than in 2016.”

Parkin pointed to states like Michigan, where many models predicted Biden would win by 5 or 6 percentage points, but where Biden ultimately won by a very small margin.

“If Biden wins the election, I think pollsters are going to say, ‘Well, you know, we didn’t get it perfect, but overall, we got it right,’” Parkin said. “I think they have a lot of explaining to do. … It’s not just the pollsters that you and I are reading — it’s the internal polling firms that work for the campaigns that are getting it wrong. If you’re Joe Biden, you’re looking at your pollster and going, ‘What happened to this me winning Michigan by 5 percent thing that you kept telling me about?’ Because that starts to impact on their strategies; if Biden knew it was going to be this close in Michigan, maybe he would have made a couple more trips there.”

Witmer believes this year’s discrepancy might not be entirely pollsters’ fault. He cited several obstacles faced by the polling industry, including increasing difficulties in contacting voters by phone, as well as social-desirability biases that might lead individuals to answer questions dishonestly.

“There are a lot of Trump supporters who are very proudly Trump supporters,” Witmer said. “There are others who, over the last four years, have been embarrassed by some of the things that Trump’s done, but they like conservative politics. They don’t necessarily want to tell a pollster, ‘Yeah, I’m going to vote for this guy,’ but they are.”

One factor that is within pollsters’ control is how strongly different responses are weighed. If a pollster finds that a particular demographic is underrepresented in their sample they will weigh those limited responses more strongly.

“There’s a bit of guesswork in that,” Witmer said. “It appears in Miami, in Dade County — they under-sampled Cuban Americans who were very scared by the socialist message about, ‘Biden’s a socialist, just like Castro,’ and that’s apparently why Cuban Americans in Dade County went much more strongly for Trump than had been expected. The polls missed that.”

The rest of the votes will need to come in before Americans can get a full picture of how this election squares up.

“We have to see how the absentee vote actually comes in,” Witmer said. “But if it turns out that there were multiple states in which the Biden outcome was substantially weaker than the polls suggested, then the pollsters have to really rethink their game.”

Across the country, protests are cropping up. Some are demanding that states stop tallying ballots, while others declare that every vote must be counted. Yesterday, people marched in Minneapolis and New York, and the Oregon National Guard was called to Portland. On campus, there has been some concern that things could escalate in Oberlin as well.

“It’s not hard to imagine a call to action from Trump could lead to outbursts of violence,” College fourth-year Julian Mitchell-Israel wrote in his op-ed This Election is a Referendum on The Great American Experiment last week. “As an Oberlin student, it has crossed my mind more than once that our school is viewed as the archetype of the ideological left. If violence occurs, it is not unlikely that we would see threats, at the least.”

Witmer says he would have worried about violence close to home if Biden had narrowly won Ohio. Garcia is not immediately concerned that Oberlin would be threatened, though she does say the thought is in the back of her mind.

“I also think that it’s important to talk to college-aged students, who grew up in this era, about how these are not normal conversations to be having, this is not really how presidential elections have worked in the past,” Garcia said. “I don’t remember a time in my lifetime where people were concerned that there was going to be violence after an election result. So that’s just something to remember: This is not normal and we should expect better.”