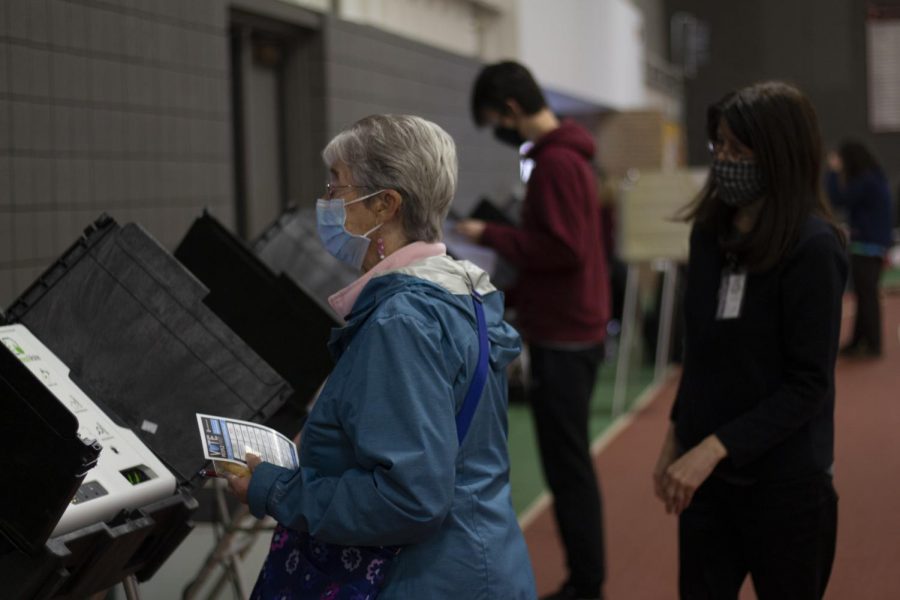 Students and community members vote at the Heisman Field House on campus.

Incumbent Republican Jim Jordan has been re-elected to represent Ohio’s 4th Congressional District for an eighth term. Jordan ran against Democratic challenger Shannon Freshour who hoped she would convince moderates to vote blue in a gerrymandered district.

With all ballots counted, Jordan has amassed 67.9 percent of the vote against Freshour’s 29.4 percent, according to results from the Associated Press.

Throughout her campaign, Freshour garnered high-profile endorsements, such as from The Plain Dealer in Cleveland, and raised significantly more money than past Democratic challengers.

“We ran the best race that we could,” Freshour said. “I am excited that so many progressives and Democrats within our 14 counties felt more supported and they felt that they could be more vocal in their support of the party. The volunteers and the party and my Oberlin students who worked so incredibly hard — many of whom I ended up hiring as staffers on my campaigns — were so fantastic.”

Freshour pointed to the pandemic as one of the largest challenges her campaign faced. The inability of Democratic candidates across the state and country to interact with voters made it difficult to campaign, but Freshour does not regret prioritizing safety.

“You can’t undercount the difference in the way that we, as Democrats, handled COVID-19 versus the way that the Republicans handled it,” Freshour said. “They held big rallies and they knocked on people’s doors and they talked to voters in a way that is incredibly unsafe and irresponsible, but it was a way that they got to motivate their base in a different way.”

Another challenge that Freshour faced was the geography of the district. Critics argue that the districts’ borders are drawn to exaggerate Republican votes, making a Democratic win unlikely. In fact, Ohio’s 4th District is often referred to as “the duck district” because of its awkward, duck-like shape.

“It’s not democracy, in my opinion, when [Republicans] draw the districts so that the candidates get to pick their voters rather than the other way around,” Garrett said. “They used a scalpel to try to take away the voices for the Democrats across the state.”

Ohio passed an amendment in 2018 that created an independent commission to determine districts, and Democrats in the region have their hopes set on the redistricting that will occur in Ohio following the recent census. They’re counting on the commission to draw fairer lines that give progressive candidates a fighting chance.

Despite these hopes, the Ohio legislature remains overwhelmingly Republican after last night, which makes Democrats nervous about the prospect of redistricting. Incumbent Republican Gayle Manning — who participated in the gerrymandering of Lorain County nine years ago according to a League of Women Voters of Ohio report — prevailed in her competitive state House race against challenger Zach Stepp.

“We’ve now got better rules on how we’re going to redistrict,” Freshour said. “The landscape in Ohio will be completely different once we have new lines and I would hope that the will of the people would be honored. They voted for a constitutional amendment to redistrict properly. The question is: Will Republicans in the statehouse honor that?”

Freshour will be watching closely to see how the redistricting plays out. She said that although she doesn’t have current plans to run for office again, she would consider it based on the new districts and where she is in her life in a few years.

“I would actually like to run a traditional campaign and actually get to meet voters and do all the things that we’re supposed to do as candidates that were denied to us this time for the sake of safety,” Freshour said. “So I don’t have any immediate plans, but I haven’t ruled anything in or out.”

Jordan’s win also comes as Trump overtook Biden in both Lorain County and Ohio. Trump’s victory in Lorain was unexpected, this year was the first time that Lorain County voted for a Republican president in over 30 years.

Across the country, many predicted a blue wave for Election Day, but Democrats failed to flip key states like Florida, Texas, and Ohio and are still trying to understand what went wrong.

“I’m baffled,” Garrett said. “I have no idea because I spent days, weeks, months, phone banking and talking to voters and … I’ve also talked to a lot of disaffected Republicans, so I can’t account for it. I really have no explanation as to why that would have happened.”

Jordan’s campaign did not respond to requests for comment.