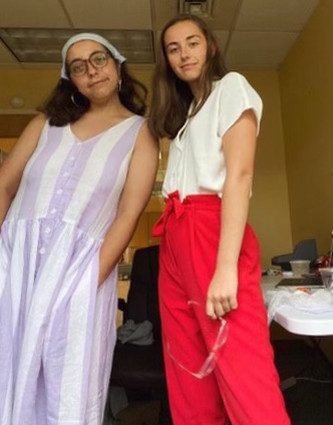 Meg Parker, OC ’19, and Julie Schreiber, OC ’19, are no strangers to organizing events. During their time at Oberlin, they both worked as Program Board officers and student managers at the ’Sco in addition to playing on the varsity field hockey team. Parker was also a member of Student Senate and the Student Finance Committee during her time at Oberlin. Post-graduation, both have worked tirelessly on Sara Gideon’s campaign for U.S. Senate in Maine. From pulling all-nighters to working early mornings at the polls, both are driven by their love of politics and their belief in changing the world for the better.

Schreiber: I’ve been working in Maine with Meg on the Sara Gideon campaign since August! Technically, Meg and I work for a private firm called Mele, Brengarth & Associates. It’s a firm that provides financial compliance services to different House and Senate campaigns across the country. So while we are not technically employed by the campaign, the Gideon campaign was the big project that we were assigned to. An average day consists of so much. We are basically fundraisers, organizers, accountants, and the USPS all at once. I think the coolest thing we do is opening all the mail that gets sent to Sara. People pour their hearts out into letters that they send to her, and they really believed in her as a figure who cared about Mainers and wanted to lift people out of poverty, provide affordable healthcare, and save the climate.

How did you get this job? Did you both know you would be working together?

Parker: I started this job in Aug. 2019 because I knew I wanted to work in Maine politics for the 2020 election cycle. I’m a fourth-generation Mainer, and the state as a whole means a lot to me. I was extremely fortunate to be supported by other folks in the industry to help connect me with this campaign.

Schreiber: I got this job through Meg! Before I worked at MBA with the Gideon campaign, I spent a year as a fellow for the National Immigrant Justice Center, where I worked on a team that specifically helped gay immigrants gain asylum. The job was awesome, but it ended at the end of July. While I was looking for a new job, Meg mentioned that her company needed to hire a new person for the Gideon campaign. So I applied, interviewed, got the job, and moved up here around the corner from Meg!

How has working together been?

Schreiber: Working together has been so much fun, and honestly, I’m used to it. In college, Meg and I were both on the field hockey team, and we both worked as student managers at the ’Sco and as Program Board officers. We’re used to putting on big events together, and we have a lot of history of being in charge together. Our leadership styles are a little different — Meg is super organized and never forgets anything, and there are tons of moments where I take the backseat because I also like being led by her. But together we really balance each other out and make a great team.

Parker: Working with Julie has been such a privilege. She brings so much fun and optimism to the workplace. One of the most remarkable things about Julie is her mentality. She always comes to work with a smile and ready to laugh about something.

Have you both stayed in touch with other Oberlin students?

Schreiber: Our field hockey team is probably the closest network that we’re both still connected to. On the day after the election, we received a handful of texts from our teammates, congratulating us for working so hard on a campaign and recognizing our efforts, even though we didn’t win.

Did you always want a career in politics?

Schreiber: Hard to say, because I still don’t really know what I want for a career. Right now, being involved in politics feels like the right decision for me because I so desperately want to do my part in shifting this country towards a better future in the coming days, weeks, months, etc. And besides, I’m listening to NPR, The Daily and reading FiveThirtyEight and all these polling websites all day anyway, so I might as well get paid for it!

Parker: I believe the fight persists on and that we should do anything and everything we can do to make the world a better place. I’ve wanted a career in politics since high school, and I’m lucky that it worked out. I want to continually improve the world around me.

What are some ways Oberlin students can stay politically engaged past the election?

Parker: Some states will have runoffs. You can knock, call, and text those places. Another thing you can do is register anyone you know to vote. Voting rights and voting accessibility is one of the most important issues. We can’t make monumental changes for health care, education, or the environment without voters using their voices.

Any advice to anyone stressed about the election/politics right now? How have you been dealing with things?

Schreiber: Well, everyone’s different, but when I’m stressed about politics, I don’t like to try to unplug, because I know I can’t. I’ve actually been finding that, amidst the garbage on Twitter, two prolific voices — Kumail Nanjiani and Roxane Gay — bring me a lot of peace. They’re calm and measured, and they’re not pollsters or operatives so they aren’t tweeting long strings of numbers. So, if you’re stressed, I think maybe checking out both of their Twitter accounts for some thoughtful and reassuring threads could be the first step towards enlightenment — but you will also need a lot of klonopin.

Parker: Election result-related stress is real and valid. I recommend making your favorite food, going for a run, calling your family — anything that can help you relax is good. It’s all personal. I made a big batch of soup yesterday and watched an animated movie, and I’ve been talking to my friends and crying when it feels cathartic.