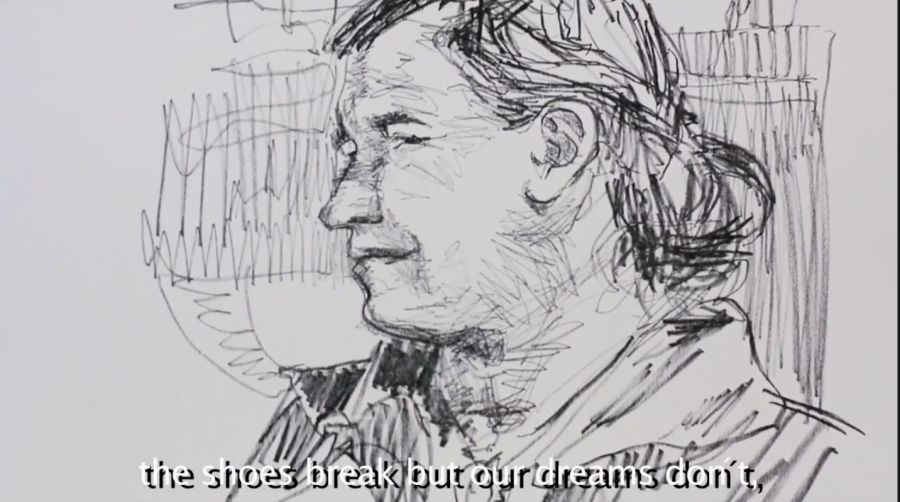 Derli Romero created portraits of the migrants he interviewed, transcribing their stories on the back of each image.

The Art Department brings over a dozen artists to campus every year for its Artist Talk series. Last Tuesday, internationally renowned artist Derli Romero gave a lecture called “Forced Displacement and Corporality” over Zoom. The Art Department hopes that this series will expose students to new work and help them build professional networks.

Romero’s lecture featured both his previous work and his most recent series: Rostros Migrantes: Colección de 100 Microhistorias (Migrant Faces: Collection of 100 Micro-Histories). Rostros Migrantes is an artist’s book that encloses the testimonies of migrants from El Salvador, Guatemala, Honduras, Hidalgo, Veracruz, and other countries, printed on paper made from the cloth of their shirts, which Romero paid or traded for. Romero drew timely connections between art and social justice as he presented his prints, his writing, poetry from collaborators, and his artistic process.

Rostros Migrantes was one of Romero’s first forays into using his artists’ books — of which he had previously published 19 — to address social issues. His inspiration to interview migrants came nearly two years ago when he traveled to cities all over Mexico and commuted weekly to Guanajuato to study migration as part of a tutoring program.

“I traveled to different parts of Mexico to talk to these people, and know these problems they have on the way to the North, and how they suffer, how they stumble and get up and just keep going,” Romero said. “I was very inspired. … It’s [also] very sad. I hear so many stories from different perspectives, from different angles, related to kidnapping, assaults, robbery, they fall from the train and get injured, and need to cut off the leg or the arm, so many stories.”

Romero spent over a year and a half interviewing migrants for the project, making a portrait of each interviewee. He then meticulously printed that person’s story on the back of their portrait.  On top of collecting the migrants’ written stories and profiles, he used their clothes for paper-making material, to involve them as much as possible in the book-making process. He also videotaped several interviews, which will be published later as a documentary. After such intensive work, Romero moved immediately to other projects, but his interest in social issues stayed with him. Currently, he is working on a new artist’s book that draws connections between Mexican ancestry and aesthetics.

“As soon as you finish one project, you want something different, from a different perspective,” he said.

Romero is the fourth visiting artist to deliver an Artists’ Talk this semester.

These talks and visits from outside artists are significant in guiding art majors to successful careers since they both inform art majors’ work and help them form networks. Josh Koller, OC ’18, who runs the Arts and Creative Professions Career Community at the Career Development Center, says that immersion and connections are invaluable tools for helping Oberlin students succeed.

“I think it’s vital,” Koller said. “I know we have incredible students, incredible artists, and some of them can serendipitously … still make these incredible careers happen without it, but for most of us, myself included … these connections are crucial.”

“When you look at an artists’ work, especially someone who has been working for as long as [Romero] has, it’s not one particular project but the accumulation of their work over time,” Yannuzzi said. “I really appreciated the way he worked, both in the studio and really reached out and looked around at what was happening all over the country and said, ‘Wait a minute, I need to figure out a way to engage. My practice needs to engage in this work, in what’s happening, and how do I do that?’ [Rostros Migrantes] was a different approach from some of his other work.”

Yannuzzi collaborated with the Career Development Center to introduce the Pathways: Studio Art series, which connected Studio Art majors to internships and successful alumni, setting them on the track to take advantage of opportunities later in their careers.