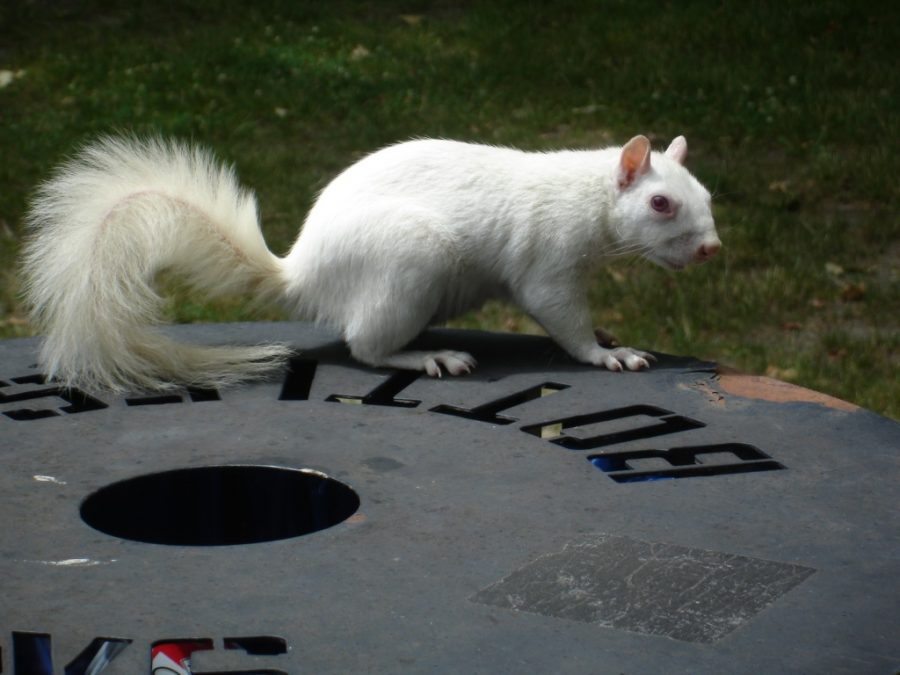 Oberlin is known for its white squirrels, but where do they come from? Chair of Biology Professor Keith Tarvin answered this question and more in an email to the Review.

“My students and I began studying eastern grey squirrels in Oberlin about 10 years ago. At that time there were two or three albino squirrels living in Tappan Square, a couple near Philips gym, and maybe a few others scattered around town. However, in the past few years, we’ve seen very few albino individuals. In fact, my group didn’t see any during a roughly three-year stretch. But I’ve heard reports of folks seeing a couple around town more recently. This variation in abundance simply reflects the low probability that two individual squirrels that each happen to carry a copy of the rare albino gene will happen to mate with each other.

“Albino squirrels are able to do just about everything that typical grey-colored squirrels can do, but they may be more conspicuous to predators, at least when there is no snow on the ground. So even when they do appear, they may be a little less likely to survive long enough to pass those genes onto their offspring. So, the albino gene in Oberlin remains rare.

“Incidentally, if you like squirrels in general, then Oberlin is a good place to be. We have six species that live in town: the eastern grey squirrel, fox squirrel, American red squirrel, chipmunk, southern flying squirrel, and woodchuck (AKA groundhog).”

With their notorious reputation and dwindling population, seeing an albino squirrel is part-initiation, part-bucket list item for many Obies. Many of us remember our experiences seeing them vividly and fondly.

I saw my first white squirrel a few weeks into my first semester at Oberlin. I was sitting in a tree doing homework on the northeast corner of Tappan Square, across from Allen Memorial Art Museum. I was feeling really lonely and homesick, but seeing a white squirrel made me feel like I was meant to be in Oberlin. I knew that there were great things to be found here.

Read about other people’s encounters with  white squirrels below.

These responses have been edited for length and clarity.

I saw it in Tappan Square as I was leaving the bookstore, literally right after I bought my first piece of Oberlin merch — a nice sweatshirt I wear a lot. It was a really nice moment because it really solidified a feeling of belonging here; I’m a new transfer student, so I feel a little weird coming in and being older than a lot of people — especially with COVID-19. It was a great moment until the albino squirrel started f**king another squirrel.

I saw a couple between 2009 and 2013. The first one I saw as I was leaving my campus visit before I’d applied. I saw it at the northwest corner of Tappan Square as we drove away, which I took as a good sign — maybe an omen that I was meant to be an Obie! I remember that sighting clearly for its *significance*, but I definitely saw a couple every year during my time at Oberlin.

We spotted this guy pulling a beer can out of a trash can on West College Street across from the Conservatory in 2009. We thought he was feeling the effects as he napped under a tree.

What, are they uncommon now? I sat and watched one bite into a walnut in Tappan Square one spring day. He turned and saw me for the first time, opened his mouth into an “O” and dropped his nut, running away. Also, I believe [Professor of Biology] Mary Garvin’s ecology class has done a number of studies on the squirrels over the years.

I see these little cuties quite often around West Vine Street. I grew up in Oberlin in the ’70s and ’80s — they were all over Tappan Square back then. Moved back in 2018, and was sad to learn they are rare sightings these days.

I was walking with my [first-year] roommate (Oziah Wales, OC ’23) in Tappan Square in mid-September of our first semester at Oberlin. It was a really nice day, and several of my friends had recently seen an albino squirrel in Tappan, so I was hoping we’d see one too. I turned to Oziah and said, “Man, I really hope we get to see an albino squirrel.” Right after I said that, one darted right across the sidewalk in front of us!

The first time I saw one, I was working as an RA, closing and walking from one dorm to the other — it was frolicking along and I was getting excited to leave campus and enjoy the summer. I also keep seeing one on the way to class in King in the morning, so it clearly lives there. And it was becoming almost not-novel, but then I saw one on West Vine Street, jumping around alone by the trees, which was so exciting! They do still turn up in unexpected places.

I was on my way to Lord-Saunders Dining Hall when I saw a flash of white across the street in Tappan Square. It started on the ground and then climbed halfway up a tree.

It was this year. My a cappella group was sitting in Tappan for brunch, and one of our group members saw it a ways away and pointed it out to the rest of us. It was pretty far, so I didn’t get a picture or super clear view, but it was a good moment nonetheless.

I saw a squirrel before 8 a.m. during finals week — I think in spring 2019. It ran up a tree. There were a few other people around, and we were all really excited!

So it’s the summer of 2018, and I have work shifts that start at 8 a.m., for which I have to cross Tappan, and I’m very sleepy. And yet! There, running cheerfully across the expanse of green, leaping onto trees, darting through the grass — there he was. The albino squirrel. I had a couple of these shifts each week through June and July, and about half the time, I saw an albino squirrel just vibin’ out there, too. Was he real? Was I still dreaming? The world may never know… Seriously though, I’m telling you, summer mornings. The truth is out there.

First time I saw one was last year, on a date in the Arb! It was just a glimpse — we saw it run across a branch, then out of sight. Second time was a month ago in Tappan Square. This time I got close enough to take a video! This was right before I took [my] first jog all semester as part of self-care, so it felt like a good sign.

I have seen it three times! The first was while I was eating on Tappan Square with some friends. I saw it from quite far off and pointed it out to said friends. I was very excited, as it was the first time I’d seen an albino squirrel. The second time, I was walking along Tappan on the west side and saw someone looking at something. I caught sight of a flash of white and crossed the street to watch the albino squirrel. It was quite small and was climbing on tree branches too thin for larger squirrels. I stayed and watched for a while, then kept going. The third time was Nov. 8, 2020. I was on the way to Stevie for brunch and saw the squirrel in about the same place. It was looking for and burying nuts, and then it ran over to a tree where several other squirrels were, and all of them chased each other around. It appeared more like they were playing than like they were protecting their territory, since they weren’t going very fast. It was a joy to see!

I saw it and screamed “AAAAA” to my friend who then said, “Don’t yell!” and looked and then also yelled.

I saw it and heard somebody else scream “AAAAA” to their friend who then said, “Don’t yell!” and looked and then also yelled.

It was everything I’d ever dreamed. I felt like I had witnessed a rare glimpse of Oberlin legend; I was reborn as an Obie, just like the time I tipped back the chair in my dorm a little too far. I watched the squirrel, Yeobie, skitter around a tree in awe. The creature was more captivating than seeing the first snow of the season. I can now proudly cross seeing an albino squirrel off the Oberlin bucket list!

I saw one a few times, I think mostly my junior and sophomore year. It was just chilling like any ol’ squirrel. I wasn’t expecting it to be quite so pretty, but I was a little awestruck the first couple times.

For more about our white squirrels, check out this Review article circa 2004.