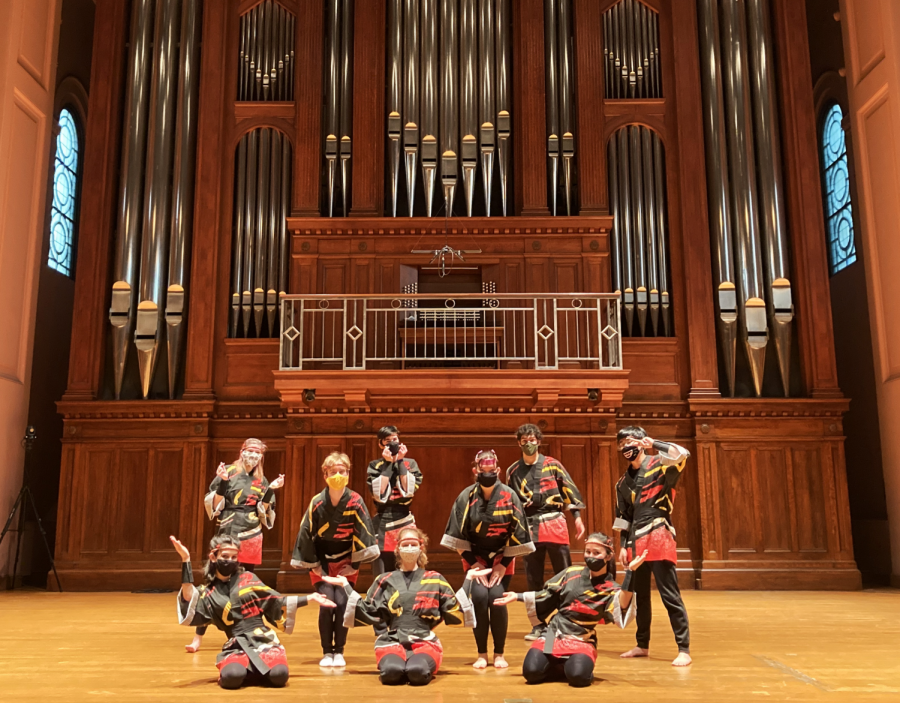 Three nights a week the booms of Japanese drums shake the halls of First United Methodist Church, as eight members of Oberlin College Taiko perform in remarkable synchronicity. Striking their drums with determination and confidence, they build up a rhythm sure to invigorate any audience, virtual or live.

In North America, taiko refers to the art of Japanese ensemble drumming. Taiko drummers use large wooden sticks called bachi to hit their taiko, which means drum in Japanese. This style of drumming traditionally accompanied religious services, war communication, court music, and noh and kabuki theater. Taiko, however, was not a standalone art form until the 1950s, when drummer Daihachi Oguchi popularized the idea of a percussion-only ensemble. This surge in recognition in the U.S. was, in part, a response to watershed moments in Japanese and Asian American history.

“In the U.S., a lot of Japanese Americans learned to assimilate to white America and intentionally not engage with their Japanese [heritage], especially because of WWII and internment,” wrote College fourth-year Akira Di Sandro in an email to the Review.

Faced with adversity, many Japanese Americans began to practice taiko in an attempt to build community and reconnect with their culture after years of repression and assimilation. The style has since evolved, appealing to a broader audience and gaining traction around the world.

OCT honors this tradition by performing and sharing taiko’s rich history. While public shows have been limited this semester, the team is still hard at work. After presenting at this year’s Virtual Parents Weekend, OCT is now working with percussion group Oberlin Steel on a collaborative piece. Together, the groups are melding OCT’s “Matsuri” with OSteel’s “This Melody Sweet.” They are now in the process of digitally merging the recordings, which were recorded independently.

College fifth-year Eleda Fernald and College fourth-year Matthew Sato, who play in both groups, are excited to see the teams join forces.

“This semester it was especially nice to collaborate since we’re all so desperate for connection and community,” Fernald wrote in an email to the Review. “[We have] hopes to one day play it together outside in a joint show. It’s been so nice to finally show each other our spaces and our different modes of rehearsing!”

Of course, this semester has not come without challenges for OCT. Due to the risk of airborne COVID-19 transmission, drummers aren’t allowed to do kiai —  sharp, emphatic vocalizations used to build energy — while playing, even with masks. Fernald feels that this has taken away an integral feature of taiko.

“[Kiai is] such an important part of songs and supporting each other that the music feels empty and cold without it,” she wrote.

Other team members are also disappointed by this restraint, though they are doing their best to adjust to the new restrictions in a way that maintains the character of the performances. According to Sato, auxiliary percussion now stands in for the usual shouts and exclamations. Di Sandro remains hopeful that the team’s enthusiasm will still shine through.

“We still can’t kiai so it won’t be the same as our usual concerts but we hope you will still feel our passion for taiko through our music,” Di Sandro wrote in a Facebook post about the Fall Show.

Maintaining a sense of community among the performers has also been trickier this year. The College’s three-semester plan means that out of OCT’s 13 members, only eight are currently on campus and able to perform. Still, off-campus OCT members are kept in the loop through a Facebook group chat and Zoom, over which rehearsals are streamed in case off-campus students wish to follow along. As for those on-campus, Sato said the group spends time outside and has individual check-ins before, during, and after rehearsals.

Off-campus students, including College third-year Sarah Wong, are eager to return to their campus, friends, and drums. Wong sees taiko as a means for Asian Americans to explore and share their vast cultural history. This ensemble is not just a performance group, but a place of belonging and celebration.

“Taiko is fun and exciting, and most of all, it’s empowering,” Wong wrote in an email to the Review. “I love playing an instrument that is both a cultural ambassador and a fixture of many Asian American communities with Japanese-American populations.”

While it has been a long time since many have felt safe watching an exhilarating performance in a crowd, there are still ways for students to share their art with one another. Tonight, OCT will drum up that excitement online, showing Oberlin the strength of both their bachi and their community.

The OCT Fall Final Show will be streamed on Vimeo tonight, Nov. 20, at 9 p.m. EST. Students interested in joining OCT should look into the introductory and intermediate taiko ExCos.