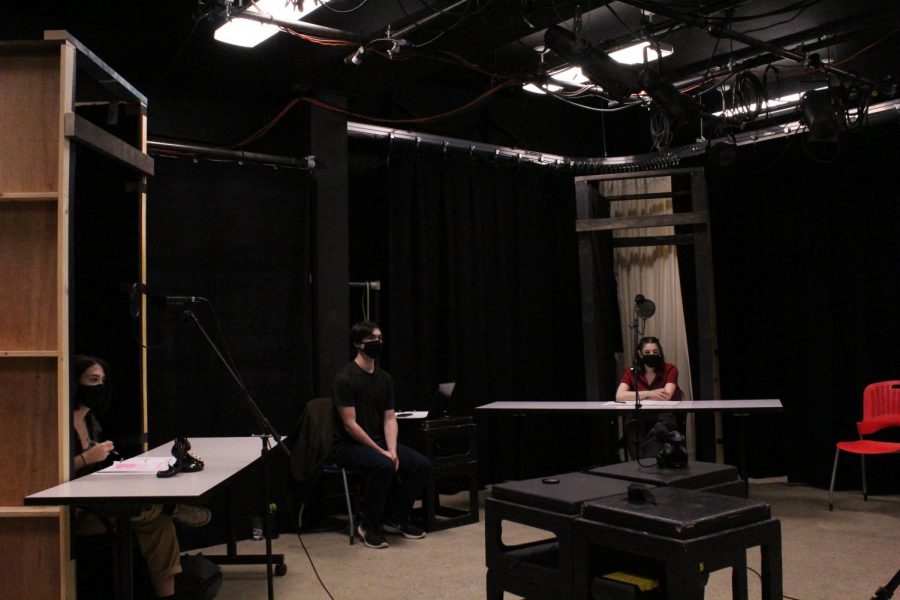 What do 17th century France, 1980s Hollywood, and 2020 pandemic-stricken Oberlin College have in common? Listeners can hear them all this Friday, Saturday, and Sunday by tuning in to Oberlin’s mainstage audio production, Neil Bartlett’s 1989 adaptation of Molière’s The Misanthrope.

Associate Professor of Theater, Costume Designer, and Director Chris Flaharty and his team have turned to the audio play, adjusting their expertise to ObieSafe guidelines. The artistic team chose the audio format to focus on the play’s centerpiece dialogue, written in six-foot Alexandrine verse, a highly rhythmic type of French closed-form poetry. The cast and crew used a combination of socially-distanced live rehearsals, Zoom rehearsals, and acting-adapted recording booths to produce and perform the play.

Molière originally set The Misanthrope in the 17th-century; it follows the evolving relationships between friends and lovers in wealthy French society over the course of a single day. In this setting, the Alexandrine verse may have melded with the French vernacular of the time — but in late ’80s Hollywood, to which Bartlett impressively transferred the play, the meter stands out. This dissonance was intentional. According to Flaharty, preserving the sonic qualities of the text was the only way to do Molière justice.

“Why pick a play, a classic play, and say I’m going to translate this play and I’m going to adapt it … and not admire [it]?” Flaherty said. “Bartlett took a loose and casual approach to that Alexandrine … in some ways like rappers do … they have assonance sometimes, they have exact rhyme, they have other kinds of suggestive rhyme. So I think that’s a really interesting contemporary thing.”

For College fourth-year and Theater major Anna Aubry, Bartlett’s thorough preservation of the language is one of this adaptation’s biggest appeals. Still, the lyrical quality of the script took some getting used to.

“I think [the adapted verse] was an interesting challenge for all of us actors, to really get the language in our mouths and spit it back in a way that felt natural and present-day, because the language really isn’t present-day in a lot of senses,” Aubry said. “I think I reached success when I really broke down each thing that was being said, and understood much more clearly what I was saying in order to translate it into present resonance and speech.”

The audio format required adjustments from everyone involved in the production — not just the actors, but the artistic team as well. Flaharty personally appreciated the challenge offered by only directing audio.

“It was a pleasant experience for me, a really good one, because I had to sit in rehearsal and remind myself not to watch them too much, but to listen to them,” Flaharty said. “I think all of us had an experience that was different than anything that we’ve done here at Oberlin for quite a while.”

For College second-year and Stage Manager Nick Moen, the isolation of the audio helped Molière’s ideas come through more clearly.

“I don’t know if I underestimated it, but I think just the importance of vocalization and speech can really influence so much,” said Moen. “For some characters, I didn’t need to see them to know, ‘Oh, this is what this character is and maybe even looks like.’ The sound of their voice creates such an easy mental image.”

The recording booths were arranged on stage for pre-recording to preserve a sense of theatrical normalcy for both performers and audience members, many of whom will not have experienced a live theater performance in over a year.

Audience members can register to hear The Misanthrope for free via this link on the Oberlin website. The performance will be available to stream from Nov. 20 – 22.